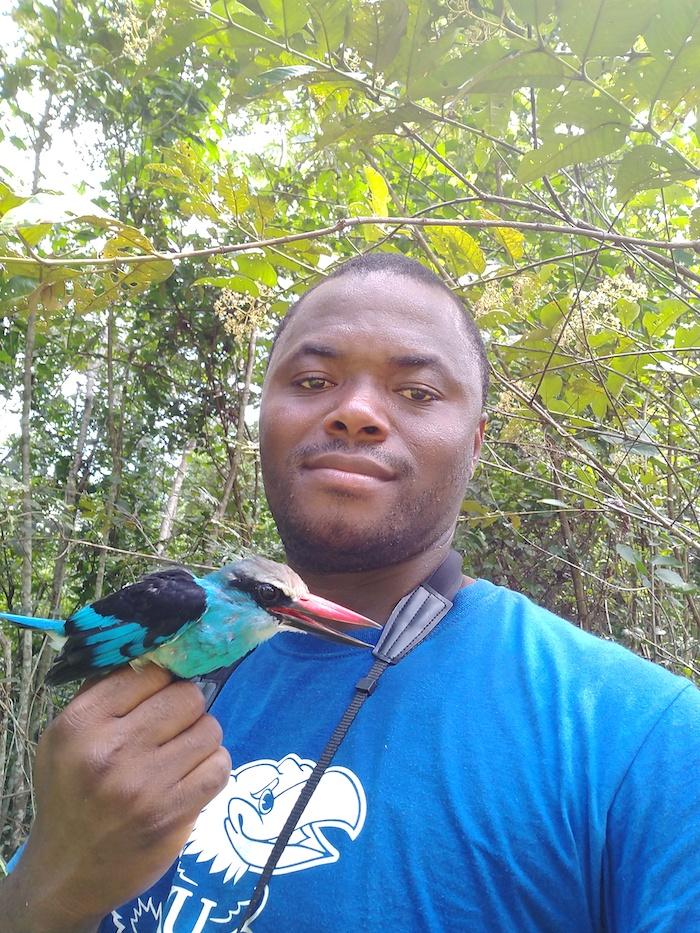 LAWRENCE — Growing up in Liberia during that country’s brutal 14-year civil war, Benedictus Freeman and his family fled into the rainforest, where they survived for years eating bush meat and foraging. The rainforest provided Freeman sustenance and protection — but more than that, the experience ignited a passion in him for understanding and preserving nature.

“At that time, I really didn’t know how important the forest would become for me — I saw the forest as a source of resources like food and shelter,” said Freeman, who today is a doctoral student in ecology & evolutionary biology at the University of Kansas and KU Biodiversity Institute. “But I developed an interest in nature there, and eventually I started studying forestry for my undergraduate degree. That actually influenced my decision to get more interested in nature and conservation.”

The rainforests that once protected Freeman and his family host one of West Africa’s flagship bird species — the White?breasted Guineafowl (Agelastes meleagrides). Now, Freeman is lead author of a new paper in the peer-reviewed journal Avian Research that projects the geographic distribution of the bird through 2050 as it shifts habitat due to climate change.

“This bird is endemic to West Africa, but it’s not fully understood — it’s poorly studied,” Freeman said. “Because of this poor history, there’s very little understanding about its range. Our study recharacterizes its distribution and helps us to understand to what extent it’s distributed across the region. The bird is threatened, and it’s of conservation concern. So that’s why it was selected for study.”

According to Freeman, the vulnerable White-breasted Guineafowl, which has appeared on Liberian postage stamps, serves as an iconic “flagship species,” conservation of which could preserve habitat of many lesser-known animals at the same time.

The KU researcher said West Africa suffers from extensive deforestation due to increasing populations, urbanization, agriculture expansion (both substance farming and industrial-scale farming of palm oil), logging and mining. Because of its exclusive dependence on the forest for habitat, the White-breasted Guineafowl is particularly susceptible to habitat loss.

“It occurs within rainforest habitats in West Africa where it feeds like regular birds, like chickens feed, and depends on insects and seeds and things,” Freeman said. “The important thing about this bird is that it’s a specialist — it’s more restricted to rainforest habitats. There is a sister species (Black Guineafowl, Agelastes niger) of the same bird that occurs on the other side of the Guinean forest, but this one is range-restricted, and it’s only found in this region. It’s not going to be found anywhere else in the world.”

Freeman hopes his research predicting the distribution of the bird in coming decades can help inform policymakers about which areas of rainforest should be prioritized for conservation.

For the new paper, Freeman and his colleagues — Daniel Jime?nez?Garci?a of Beneme?rita Universidad Auto?noma de Puebla in Mexico, Benjamin Barca of the Royal Society for the Protection of Birds in Sierra Leone and Matthew Grainger of Newcastle University in the United Kingdom — used occurrence data from the Global Biodiversity Information Facility and datasets about occurrences of the White-breasted Guineafowl in Sapo National Park in Liberia and Gola Rainforest National Park in Sierra Leone, including data collected by Freeman.

The team created maps showing current and likely future habitats where the White?breasted Guineafowl could migrate in response to a shifting climate. Unexpectedly, there was good news for the iconic bird in the findings: “The projected impacts of climate change on the geographic distribution of White-breasted Guineafowl were minimal, suggesting stability across the species’ range for the present and in the future, at least as regards climate change effects,” researchers said. “Low sensitivity to climate change in this species does match the general observation for West African birds.”

However, the team found coastal areas where the White?breasted Guineafowl is found today would be degraded by sea-level rise and resulting coastal erosion, destroying some of the species’ range.

As for Freeman, this summer he’s back in Liberia conducting more fieldwork on birds in some of the same areas his team found to be suitable for the White-breasted Guineafowl.

“We were pleased to document populations at the sites where we worked, and then we were able to collect data on other bird species,” he said. “We have some interesting records that might be species not yet known to science, but we need to do some detailed studies.”

Freeman aims to finish his doctorate at KU next year, he said. After that, he’ll look for opportunities for postdoctoral work.

“I don’t know exactly where that’s going to be,” he said. “But I’m hoping that wherever I get a good job, I can have an opportunity to work in West Africa to do more research. There’s a huge capacity gap in that area. There’s a need to have homegrown scientists involved with this kind of research specifically. So, my passion is to work there.”

The story of nanotechnology and how size really does matter

Scienmag Mar 22, 2019
Credit: World Scientific Nanotechnology is a buzz word many of us have heard but are uncertain as to what it…

The frostier the flower, the more potent the cannabis