Amanda De La Torre is studying the genome of sugar pines to find out what makes some trees resistant to the devastating effects of white pine blister rust, which kills more than 95 percent of the trees it infects 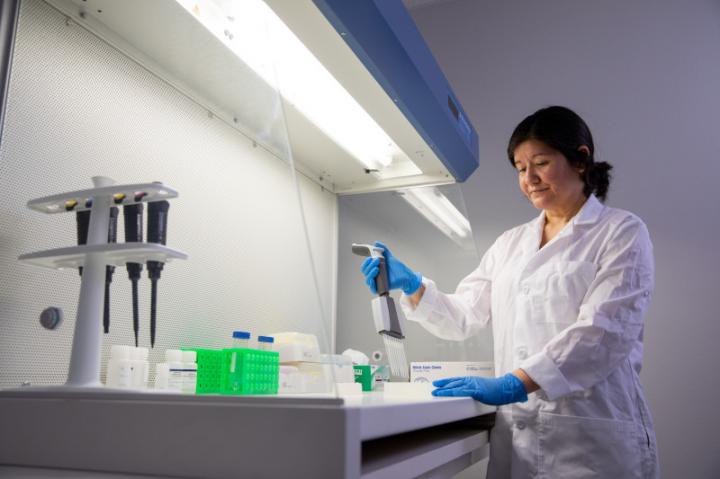 For about 100 years, a deadly disease called white pine blister rust has been spreading steadily from Canada across western forests of the United States and along the East Coast. The fungus, Cronartium ribicola, attacks five-needle pines and kills more than 95 percent of the trees it infects by cutting off pathways for water and nutrients in the cambium layer, where new growth occurs.

The U.S. Forest Service (USFS) reports about three to five percent of white pines are resistant to the devastating effects of the pathogen; however, that doesn’t mean their offspring will be immune to the disease as well. Assistant professor of forest genetics Amanda De La Torre, in the School of Forestry at Northern Arizona University, is delving deep into the genome of sugar pines – a white pine species – to find out why.

“Trees can inherit the resistance through genes. They may get those genes that allow them to survive if they are attacked by the fungus,” De La Torre said. “We also know from studies on other plant species that sometimes there are effects a mother can pass on that are not in the genes, epigenomic changes. We know very little about this in trees.”

De La Torre explains that epigenomic changes can be caused by something that the mother experienced, like a change in the environment that stressed the tree. “Maybe it got too hot or too cold unexpectedly, so those seeds may have inherited this experience of the mom. It’s not really in the genetic makeup of the seedling, but is expressed by how the next generation of trees react to the disease,” she said.

That’s why De La Torre is looking across the whole sugar pine genome for methylated sites – altered areas on the DNA – that are translated through the RNA and expressed through the plant’s reaction to the fungus.

“The reason this has not been studied before is because the sugar pine has a huge genome, several times larger than humans and probably one of the largest in plant species. The sequence, or bioinformatic computation, wasn’t good enough to deal with this amount of data in the past.”

Through an $810,000 four-year grant from the National Institute of Food and Agriculture (NIFA), De La Torre is working in partnership with assistant research professor of ecology and evolutionary biology Jill Wegrzyn at the University of Connecticut (UConn) to create a methylated map for the species.

“It will take a lot of effort because we are talking about this huge genome. Fortunately, the sugar pine genome was sequenced in 2016.”

The research involves collecting sugar pine seeds from blister rust-resilient trees and infecting them with the fungus. “We are going to take RNA samples to look at the expression, how the seedlings change after they are infected,” she said.

One of the main objectives of the research is to understand how climate is affecting the trees’ resistance.

“My idea is to find if external factors really can have an impact on how the next generation of these trees will react to disease,” De La Torre said. “We know very little about epigenomic changes in trees. My guess is that they are really important. If we can understand that, we may be able to control the external factors and have resistant trees.”

De La Torre and her team will conduct experiments in collaboration with geneticist Richard Sniezko at the USFS Dorena Genetic Research Center in Oregon, which houses disease resistance breeding programs for five-needled pines.

“With significant changes in weather patterns,” De La Torre said, “including increased periods of drought, the identification of epigenetically prone genes susceptible to environmental regulation may help predict transgenerational immune response to disease in long-generation trees. The outcomes of this research will significantly increase our understanding of the role of epigenomics in transgenerational immune responses in long-generation, economically important conifer species.”

“If you can define where the methylated sites are and link them to a functional trait, then you know which sections of the genome are affecting the tree’s reaction. The truth is that plants have a complicated response to disease. We don’t understand very well how these different mechanisms work together. It will be great to see what happens in white pine populations for the first time and how these processes come together to fight disease,” she said.

White pine blister rust is native to Asia. Researchers say the disease was introduced to North America unintentionally around the turn of the 20th century through the import of infected white pine seedlings grown in European nurseries. Sugar pines can live 400 to 500 years and are second only to giant sequoia in total volume. The appearance of yellow-orange blisters on the bark is a sign of infection and an indication that the tree likely will die.

The researchers will curate data and other resources generated by the project and share them with the community through the TreeGenes database and CartograTree application, both created by Wegrzyn’s lab.

Northern Arizona University is a higher-research institution providing exceptional educational opportunities in Arizona and beyond. NAU delivers a student-centered experience to its 31,000 students in Flagstaff, statewide and online through rigorous academic programs in a supportive, inclusive and diverse environment. Dedicated, world-renowned faculty help ensure students achieve academic excellence, experience personal growth, have meaningful research opportunities and are positioned for personal and professional success.