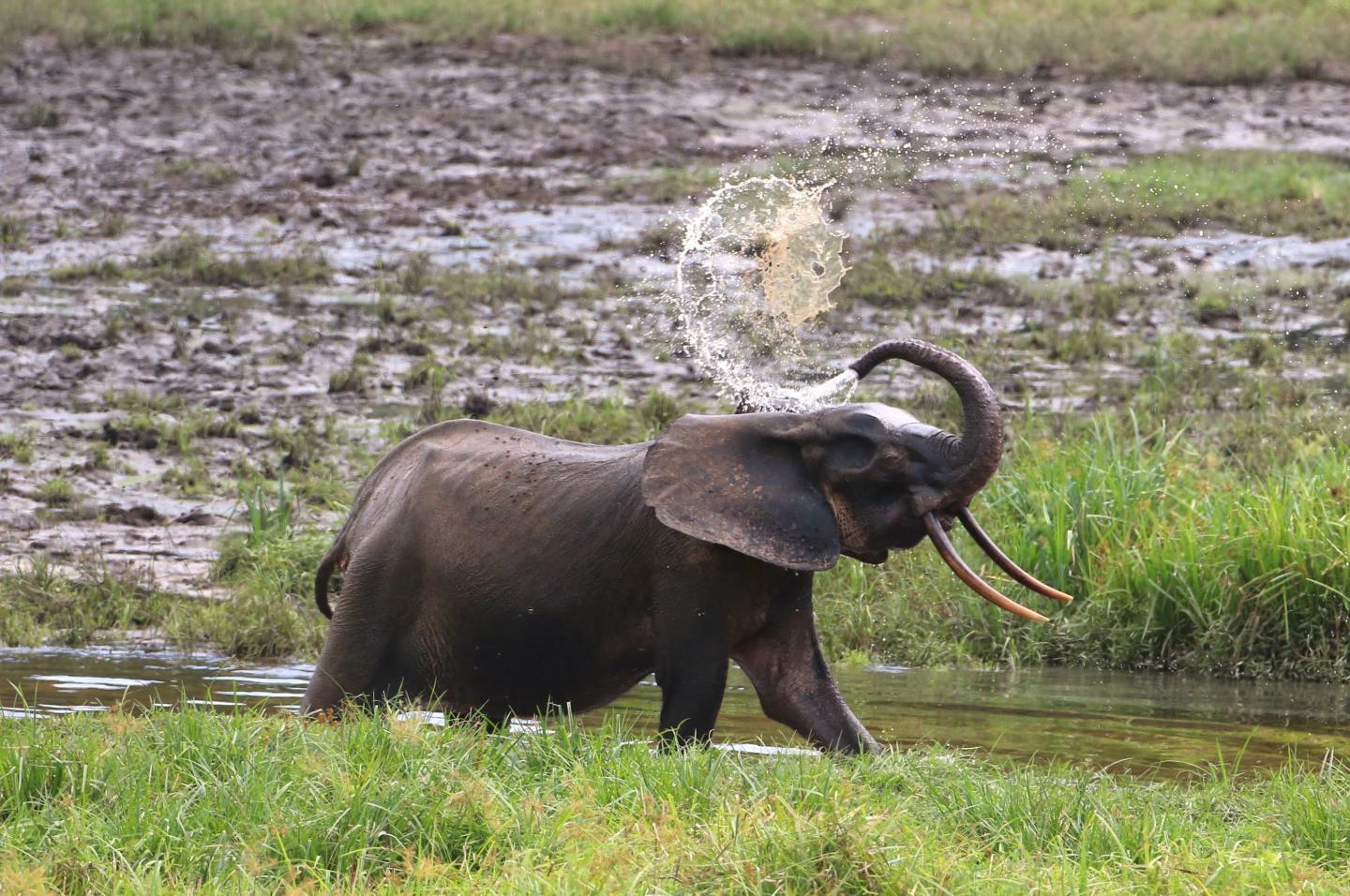 LIBREVILLE, Gabon (April 15 2021) – A team of scientists led by the Wildlife Conservation Society (WCS) and working closely with experts from the Agence Nationale des Parcs Nationaux du Gabon (ANPN) compared methodologies to count African forest elephants (Loxodonta cyclotis), which were recently acknowledged by IUCN as a separate, Critically Endangered species from African savannah elephants. The study is part of a larger initiative in partnership with Vulcan Inc. to provide the first nationwide census in Gabon for more than 30 years. The results of the census are expected later this year.

Contrary to savannah elephants (Loxodonta africana) which can be counted directly, usually through aerial survey, accurately censusing elusive forest elephants is more challenging and refinements of methods were needed. Publishing a new survey method to counting forest elephants in the journal Global Ecology and Conservation, the team compared traditional methodologies to count elephant dung piles along line transects, with spatial capture-recapture (SCR) techniques using both camera traps and DNA dung analysis. SCR estimates populations by measuring how many times and in what location individual animals are recounted.

Said the study’s lead author, Alice Laguardia of WCS’s Gabon Program: “The more accurately we can count forest elephants, the more we can measure whether conservation efforts are successful. We are hopeful that the results of this study will help governments and conservation partners protect this Critically Endangered species throughout its range.”

Researchers assessed the performance of the methodologies to three relatively large forest elephant populations in Gabon. They found that the SCR method that used DNA sampling of dung was comparable in accuracy to the line transect method but less expensive on larger scales.

Stephanie Bourgeois, coauthor and geneticist at ANPN, said: “Testing of this new DNA approach has been made possible by the recent development of novel genetics techniques by ANPN and the creation of a new genetics lab in Gabon enabling to perform all DNA analyses in-country.”

SCR Camera trap surveys were more precise on smaller scales but more expensive. The authors recommend that the use of both SCR methods, and their development, continue. They say that future findings and improvements should be compiled across studies to ensure their robust evolution as an option for monitoring the African forest elephant across its range and inform strategies and action for its conservation.

“As long as ivory is a precious commodity, elephants will be at risk,” said Lee White, the Gabonese Minister of Water, Forests, the Seas, the Environment, charged with Climate Change & Land Use Planning. “In Africa there is a clear link between environmental governance, peace and security. Countries that have lost their elephant populations have all too often descended into civil strife. Through the results of this study we hope to obtain a clear picture of the trend of poaching and elephant populations in all of Gabon.”

“Vulcan recognizes the significant role of accurate population data for conservation management and policy decisions,” said Ted Schmitt, director, conservation at Vulcan Inc. “By providing timely census data, we can fill critical knowledge gaps and enable prioritization of conservation resources. We are pleased to be part of this effort with Wildlife Conservation Society and the government of Gabon to help preserve this important species.”

Funding for this critical work was provided by Vulcan Inc., a Seattle company founded by the late philanthropist Paul G. Allen and his sister Jody Allen, who currently serves as chair.