For these critically endangered marine turtles, climate change could be a knockout blow 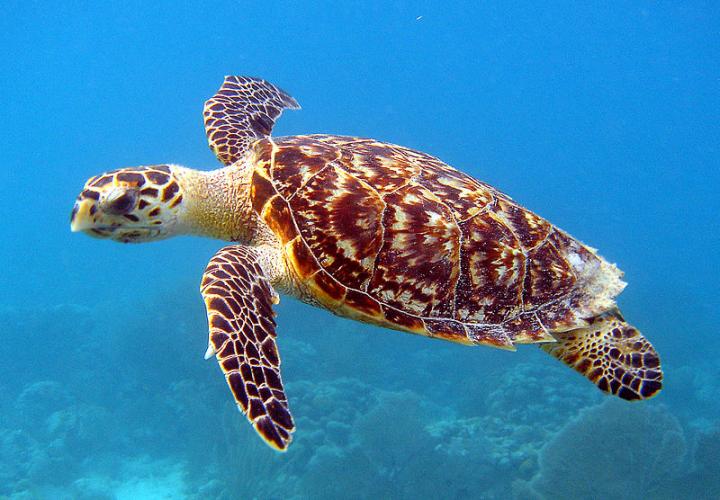 TALLAHASSEE, Fla. — Hawksbill turtles aren’t the only marine turtles threatened by the destabilizing effects of climate change, but a new study from researchers at Florida State University shows that this critically endangered species could be at particular risk.

In a study published in the journal PLOS ONE, researchers from FSU’s Department of Earth, Ocean and Atmospheric Science suggest that projected increases in air temperatures, rainfall inundation and blistering solar radiation could significantly reduce hawksbill hatching success at a selection of major nesting beaches.

“Marine turtles have been around for millions of years, and during this time they have adapted to substantial climatic changes,” said Assistant Professor of Oceanography Mariana Fuentes, co-author of the study. “In the past they have adapted by shifting their nesting grounds and nesting season to align with more favorable conditions. However, increasing impacts to nesting habitats from coastal construction, storms and sea level rise are jeopardizing their ability to adapt.”

To evaluate climate change’s effects on hawksbill hatching success, FSU researchers analyzed more than 5,000 nests from the five Brazilian beaches where a majority of the region’s hawksbill nesting occurs. The team focused specifically on five climatic variables — air temperature, rainfall, humidity, solar radiation and wind speed — in order to render a more comprehensive model of the various and subtle effects of a changing climate on the sensitive incubation process.

As reptiles, marine turtles’ body temperature regulation relies on external sources of heat. That makes hawksbills and their cousins especially dependent upon and responsive to air temperature. Nowhere is that responsiveness more apparent than in marine turtle nests, where extreme temperature fluctuations can influence egg incubation, dictate sex ratios and determine hatching success.

For some marine turtle species, rising temperatures may not necessarily mean less successful incubation. For example, a study from Montero and Fuentes published earlier this year revealed that, for loggerhead turtles in the temperate nesting beaches of North Florida, changing conditions could yield potential short-term increases in hatching success by 1 to 7.6 percent.

The outlook for the hawksbills, however, is not as rosy.

Montero and Fuentes found that rising air temperatures, accompanied by increased rainfall and solar radiation, are projected to reduce overall hatching success at the Brazilian nesting sites by up to 11 percent by the year 2100. Higher temperatures may warm nests beyond the threshold for healthy incubation, they said, and increased rainfall could saturate the soil and suffocate the embryos.

If the turtles do incubate successfully and hatch, they then have to contend with skyrocketing solar radiation, which could bake the sand and cause the nests to cave in — a major hazard for the hatchlings as they seek the safety of the open sea.

While that may seem a dire and difficult future for a species whose numbers are already dwindling, Montero said there’s still time for humans to soften the blow.

Maria A.G. dei Marcovaldi, Milagros Lopez-Mendilaharsu, Alexsandro S. Santos and Armando J. B. Santos from the Fundação Pró-Tamar in Brazil contributed to this research. The study was supported by grants from the Sea Turtle License Plate Grants Program.

Is early physical therapy associated with less opioid use in patients with musculoskeletal pain?

Beyond 1 and 0: Engineers boost potential for creating successor to shrinking…

What happens when your favorite PBS hosts eat miracle berries?