For oxygen-deprived newborns, rewarming after cooling therapy can trigger seizures

Oxygen-deprived newborns who undergo cooling therapy to protect their brains are at an elevated risk of seizures and brain damage during the rewarming period, which could be a precursor of disability or death, a new study by a team of researchers led by a UT Southwestern pediatrician suggests. The finding, published online in JAMA Neurology, could lead to better ways to protect these vulnerable patients during an often overlooked yet critical period of cooling – or hypothermia – therapy. 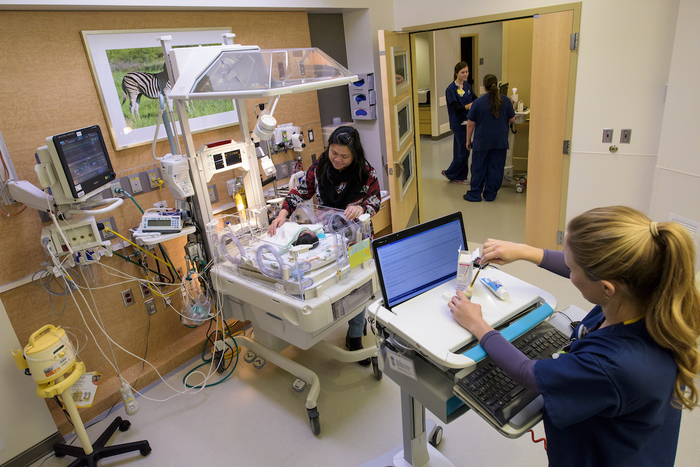 Oxygen-deprived newborns who undergo cooling therapy to protect their brains are at an elevated risk of seizures and brain damage during the rewarming period, which could be a precursor of disability or death, a new study by a team of researchers led by a UT Southwestern pediatrician suggests. The finding, published online in JAMA Neurology, could lead to better ways to protect these vulnerable patients during an often overlooked yet critical period of cooling – or hypothermia – therapy.

“A wealth of evidence has shown that cooling babies who don’t receive enough oxygen during birth can improve their neurodevelopmental outcomes, but few studies have looked at events that occur as they are rewarmed to a normal body temperature,” said study leader Lina Chalak, M.D., MSCS, Professor of Pediatrics and Psychiatry at UT Southwestern, and Associate Division Chief of Neonatology and founding Medical Director of the Neonatal Neurology Program at Parkland Hospital. “We’re showing that there’s a significantly elevated risk of seizures during the rewarming period, which typically go unnoticed and can cause long-term harm.”

Millions of newborns worldwide are affected by neonatal hypoxic-ischemic encephalopathy (HIE), brain damage initially caused by a lack of oxygen during birth. Although the World Health Organization estimates that birth asphyxia is responsible for nearly a quarter of all neonatal deaths, those babies that survive oxygen deprivation are often left with neurological injuries, Dr. Chalak explained.

To help improve outcomes, babies diagnosed with HIE are treated with hypothermia, using a cooling blanket that brings the body temperature down to as low as 33.5°C, said Dr. Chalak – a treatment implemented 15 years ago by the National Institutes of Health’s (NIH) Neonatal Research Network, of which UT Southwestern has long been a member.

Initial studies showed that during cooling, babies with HIE commonly have symptomless seizures – neurological events that can further damage the brain – prompting electroencephalographic (EEG) monitoring to become a standard part of the hypothermia protocol. However, Dr. Chalak explained, babies typically haven’t been monitored during the rewarming period, in which the temperature of the blanket is increased by 0.5°C every hour until babies reach a normal body temperature.

To better understand seizure risk during rewarming, Dr. Chalak and colleagues from 21 different institutions in the Neonatal Research Network studied 120 babies who were enrolled in another study that compared two different cooling protocols, one longer and colder than the other. In Dallas, patients were enrolled at Parkland Health & Hospital System, with follow-ups at Children’s Health. As part of the new study, the babies were also monitored with EEG to check for seizures both during the cooling and the rewarming phases of hypothermia.

When the researchers compared data from the last 12 hours of cooling and the first 12 hours of rewarming, they found that rewarming increased the odds of seizures about three-fold. In addition, babies who had seizures during rewarming were about twice as likely to die or have a neurological disability by age 2, compared with those who didn’t have seizures during this period. This finding held true even after adjusting for differences in medical centers and the newborns’ HIE severity.

Although it’s not known how to prevent seizures from occurring in babies with HIE, treating seizures when they do occur can help prevent further brain damage, Dr. Chalak said. Consequently, monitoring during both cooling and rewarming can help protect these young patients’ brains from further insults while they heal.

“This study is telling us that there’s an untapped opportunity to improve care for these babies during rewarming by making monitoring a standard part of the protocol,” Dr. Chalak said.

Roy J. Heyne, M.D., Professor of Pediatrics at UTSW, contributed to the study, which was funded by the Eunice Kennedy Shriver National Institute of Child Health and Human Development of the NIH. Dr. Chalak also received funding from NIH grant R01NS102617 of the National Institute of Neurological Disorders and Stroke.

UT Southwestern, one of the nation’s premier academic medical centers, integrates pioneering biomedical research with exceptional clinical care and education. The institution’s faculty has received six Nobel Prizes and includes 25 members of the National Academy of Sciences, 16 members of the National Academy of Medicine, and 14 Howard Hughes Medical Institute Investigators. The full-time faculty of more than 2,800 is responsible for groundbreaking medical advances and is committed to translating science-driven research quickly to new clinical treatments. UT Southwestern physicians provide care in about 80 specialties to more than 117,000 hospitalized patients, more than 360,000 emergency room cases, and oversee nearly 3 million outpatient visits a year.