Flying the final approach to Tranquility Base 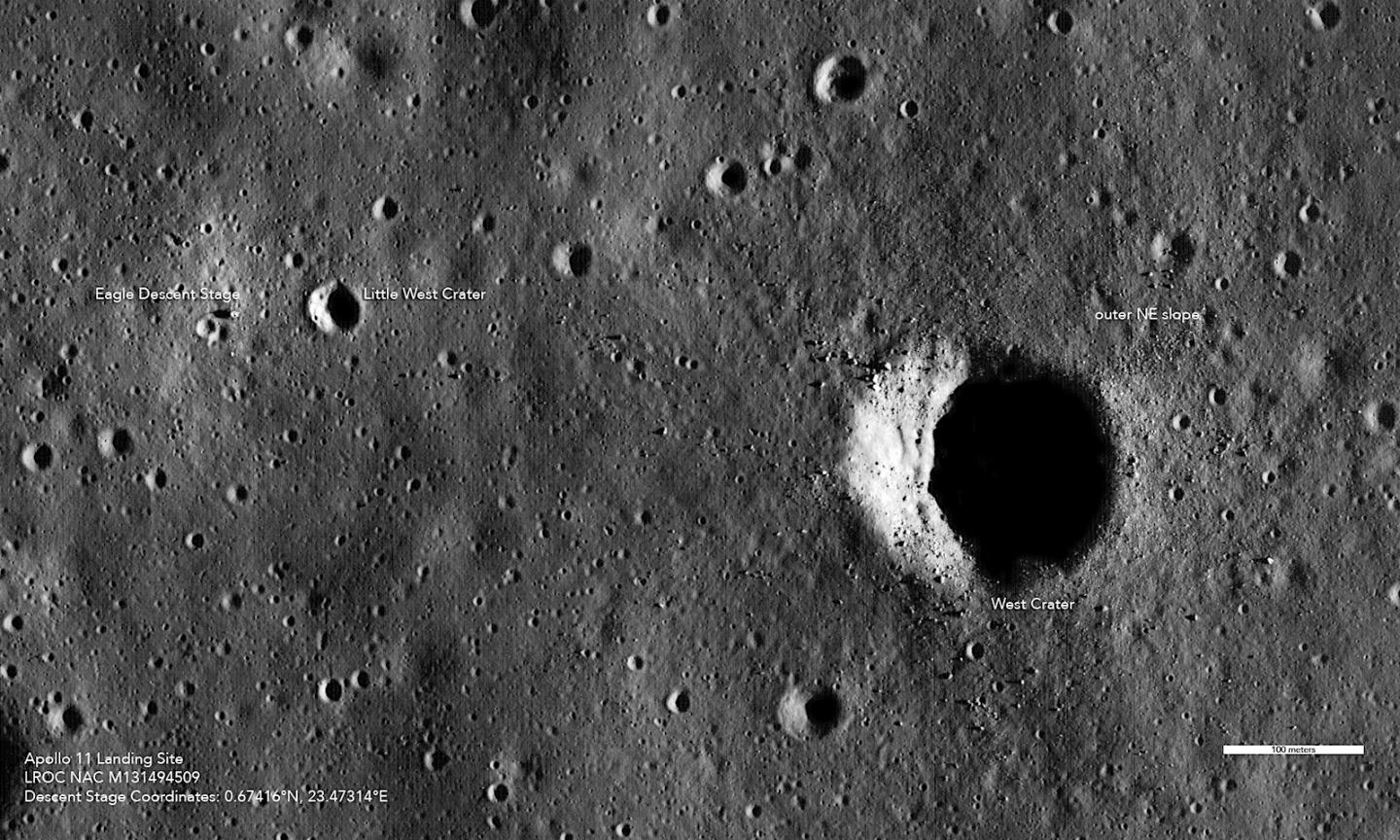 As the Apollo 11 Lunar Module approached the Moon’s surface for the first manned landing, commander Neil Armstrong switched off the autopilot and flew the spacecraft manuallly to a landing.

A new video, created at Arizona State University’s School of Earth and Space Exploration, shows what Armstrong saw out his window as the lander descended — and you’ll see for yourself why he took over control.

A team led by Mark Robinson, principal investigator for the Lunar Reconnaissance Orbiter Camera (LROC) and professor in the School, recreated the view in a striking video. They used the crew’s voice recording, the timings, a video taken on film, and images taken from lunar orbit by the LRO Camera over the last 10 years.

Said Robinson, “The only visual record of the actual Apollo 11 landing is from a 16mm time-lapse movie camera, running at 6 frames a second and mounted in Buzz Aldrin’s window.” Edwin “Buzz” Aldrin was designated as the LM pilot, although for the actual landing his role was to announce the LM’s altitude and rates of descent and forward motion. He stood on the right side of the cabin.

“Due to the small size of the lander windows and the angle at which the movie camera was mounted, what mission commander Neil Armstrong saw as he flew the LM to the landing was not recorded,” Robinson explained. Armstrong’s place was on the cabin’s left side.

Robinson said, “From this trajectory information, and high resolution LROC Narrow-Angle Camera images and topography, we simulated what Armstrong saw in those final minutes as he guided the LM down to the surface of the Moon.”

As the video begins, Armstrong could see the autopilot was aiming to land on the rocky flank of West Crater (625 feet wide). This caused him to take over manual control and fly horizontally, searching for a safe landing spot. At the time, only Armstrong saw the hazard, and he was too busy flying the LM to discuss the situation with mission control.

After flying over the hazards presented by the bouldery flank of West Crater, Armstrong spotted a safe landing site about 1,600 feet ahead where he carefully descended to the surface. Just before landing, the LM flew over what was later called Little West Crater (135 feet wide). After landing Armstrong visited and photographed this crater during his extravehicular activity.

“Of course, during the landing he was able to lean forward and back and turn his head to gain a view that was better than the simple, fixed viewpoint presented here,” said Robinson. “However, our simulated movie lets you relive those dramatic moments.”

Robinson points out that because LROC’s images were taken almost 50 years after the actual landing, the video shows the lander’s descent stage on the surface. (It was used as a launch pad when the astronauts blasted off for their return to Earth.) And the video shows where they disturbed the lunar soil as they walked: look for dark thread-like paths.

“Obviously,” says Robinson, “these weren’t visible to Armstrong during the landing approach!”

Germ-free lungs of newborn mice are partially protected against hyperoxia

Scienmag Nov 21, 2019
A first-of-its-kind newborn mouse model will permit study of how to protect extremely low birth-weight infants from…

Master regulator in mitochondria is critical for muscle function and…