Fly researchers find another layer to the code of life

DURHAM, N.C. — A new examination of the way different tissues read information from genes has discovered that the brain and testes appear to be extraordinarily open to the use of many different kinds of code to produce a given protein. 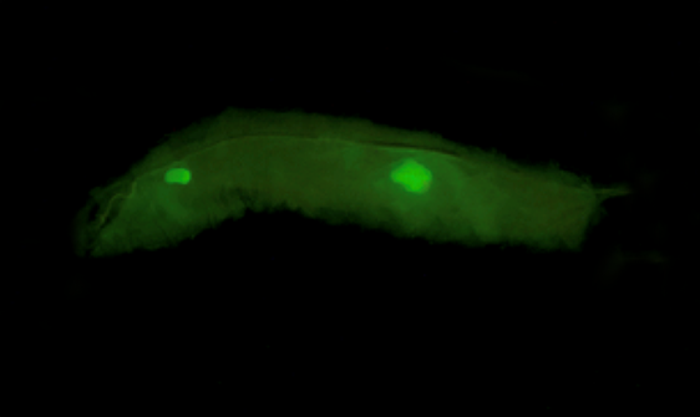 DURHAM, N.C. — A new examination of the way different tissues read information from genes has discovered that the brain and testes appear to be extraordinarily open to the use of many different kinds of code to produce a given protein.

In fact, the testes of both fruit flies and humans seem to be enriched in protein products of these rarely-used pieces of genetic code. The researchers say the use of rare pieces of code may be another layer of control in the genome that could be essential to fertility and evolutionary innovation.

A decade after solving the structure of DNA as a double helix of the bases A,C, T and G, Francis Crick went on to decode the intermediate step by which three of these letters are translated into a “codon,” the recipe for a single amino acid, the building block of protein.

What was striking at the time and still somewhat puzzling is that this layer of life’s code used 61 different three-letter codons to produce just 20 amino acids, meaning many codons were being used to describe the same thing.

“We’re taught in our biology classes that when you change from one version of the codon to the other, and it doesn’t change the amino acid, that’s called a silent mutation. And that implies that it doesn’t matter,” said Don Fox, an associate professor of pharmacology and cancer biology in the Duke School of Medicine.

“Yet when researchers have sequenced all these different organisms, they found a hierarchy,” Fox said. “Some codons are really frequent and some are really rare.” And that distribution of codons can vary from one kind of tissue in an organism to another.

Fox wondered if the rarities play a role in how, say, a liver cell does liver things and how a bone cell does bone things.

Fox and his team, headed by PhD student Scott Allen, wanted to zoom in on the rare codons, using their preferred model Drosophila melanogaster, the laboratory fruit fly. A growing body of work has shown that dissimilar tissues have varying ‘codon bias’ — that is, different frequencies of synonymous codons occurring in different tissues. Rare codons are known to slow down and even stop protein production and “genes with a lot of these rare codons make a lot less protein,” Fox said.

Fox was collaborating with colleague Christopher Counter, the George Barth Geller Distinguished Professor of Pharmacology at Duke to understand a gene called KRAS, which is known to be a bad actor in pancreatic cancer especially, and which carries a lot of rare codons. Why, they wondered, would a cancer mutation have slowed down protein production, when normally a cancerous mutation makes more of something.

“It turns out, the way KRAS is designed, it should be very hard to make any of it,” Fox said.

Fox’s team developed a new way of analyzing tissue-specific codon usage to look at where and how rare codons can be used in the fruit fly, which has perhaps the best-known genome in science. They ran a series of experiments to vary which codons were included in the KRAS gene and found that rare codons had a dramatic effect on how KRAS controls signaling between cells.

“I realized from this cancer collaboration that we could take similar approaches and apply them to my primary research question, which is how tissues know what they are,” Fox said.

In further experiments, they found that testes in flies — and in humans — are more tolerant of a high diversity of codons, but fly ovaries are not. The fly brain was also more tolerant of diverse codons. The work appeared May 6 in the open access journal eLife.

One particular gene with a high number of rare codons, RpL10Aa, is evolutionarily newer and helps to build the ribosome, the protein-assembly machinery in the cell. Fox said it appears that this gene’s rare codons serve to limit its activity to just the more tolerant testes, and that, in turn, may be something critical to fertility.

“The way the testes seem to permit almost any gene being expressed, perhaps that makes it a breeding ground, if you will, for new genes,” Fox said. “The testes seems to be a place where younger genes tend to first be expressed. So we think it’s sort of this more permissive tissue, and it lets new genes take hold.”

“What we think we’re seeing is that rare codons are a way to limit the activity of this evolutionarily young gene to the testes,” Fox said. “That would make rare codons yet another layer of control and fine-tuning in the genes.”

The editors of eLife said “the work breaks new ground in identifying codon usage as a basis for tissue-specific gene expression in animals.”