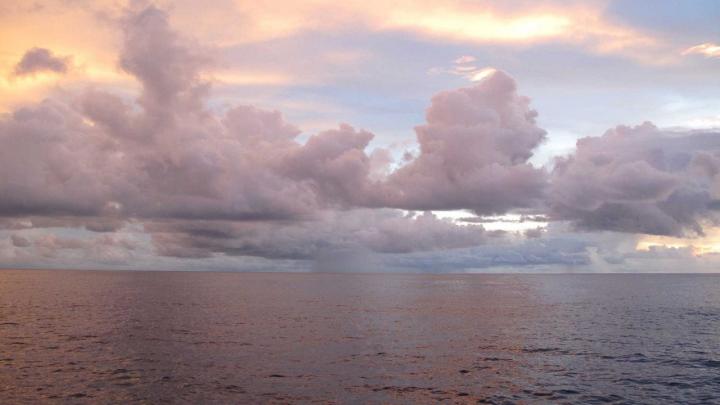 A key component of the Gulf Stream has markedly slowed over the past century–that’s the conclusion of a new research paper in Nature Communications published on August 7. The study develops a method of tracking the strength of near-shore ocean currents using measurements made at the coast, offering the potential to reduce one of the biggest uncertainties related to observations of climate change over the past century.

“In the ocean, almost everything is connected,” said Christopher Piecuch, an assistant scientist in the Physical Oceanography Department at the Woods Hole Oceanographic Institution (WHOI) and author of the study. “We can use those connections to look at things in the past or far from shore, giving us a more complete view of the ocean and how it changes across space and time.”

Piecuch, who specializes in coastal and regional sea level change, used a connection between coastal sea level and the strength of near-shore currents to trace the evolution of the Florida Current, which forms the beginning of the Gulf Stream. The Gulf Stream flows north along the Southeast Atlantic Coast of the United States and eventually east into the North Atlantic Ocean, carrying heat, salt, momentum, and other properties that influence Earth’s climate. Because nearly continuous records of sea level stretch back more than a century along Florida’s Atlantic Coast and in some parts of the Caribbean, he was able to use mathematical models and simple physics to extend the reach of direct measurements of the Gulf Stream to conclude that it has weakened steadily and is weaker now than at any other point in the past 110 years.

One of the biggest uncertainties in climate models is the behavior of ocean currents either leading to or responding to changes in Earth’s climate. Of these, one of the most important is the Atlantic Meridional Overturning Circulation, or AMOC, which is a large system or “conveyor belt” of ocean currents in the Atlantic that includes the Gulf Stream and that helps regulate global climate. Piecuch’s analysis agrees with relationships seen in models between the deeper branches of the AMOC and the Gulf Stream, and it corroborates studies suggesting that the deeper branches of AMOC have slowed in recent years. His method also offers the potential to monitor ocean currents like the Gulf Stream from the coast, complementing existing but difficult-to-maintain moored instruments and expensive research cruises.

“If we can monitor something over the horizon by making measurements from shore, then that’s a win for science and potentially for society,” said Piecuch.

The Woods Hole Oceanographic Institution is a private, non-profit organization on Cape Cod, Mass., dedicated to marine research, engineering, and higher education. Established in 1930 on a recommendation from the National Academy of Sciences, its primary mission is to understand the ocean and its interaction with the Earth as a whole, and to communicate a basic understanding of the ocean’s role in the changing global environment. For more information, please visit http://www.whoi.edu.

The Florida Current, which forms the start of the Gulf Stream, has slowed over the past century and is the slowest it has been at any point in the past 110 years.

Historical analysis of the current was made using sea level records from Florida and the Caribbean.

Slowing of the Florida Current relates to the strength of the Gulf Stream and the much broader system of currents known as the Atlantic Meridional Overturning Circulation (AMOC) that helps regulate global climate.

Understanding past changes in ocean currents helps reduce one of the biggest uncertainties in observations of climate change over the past century.