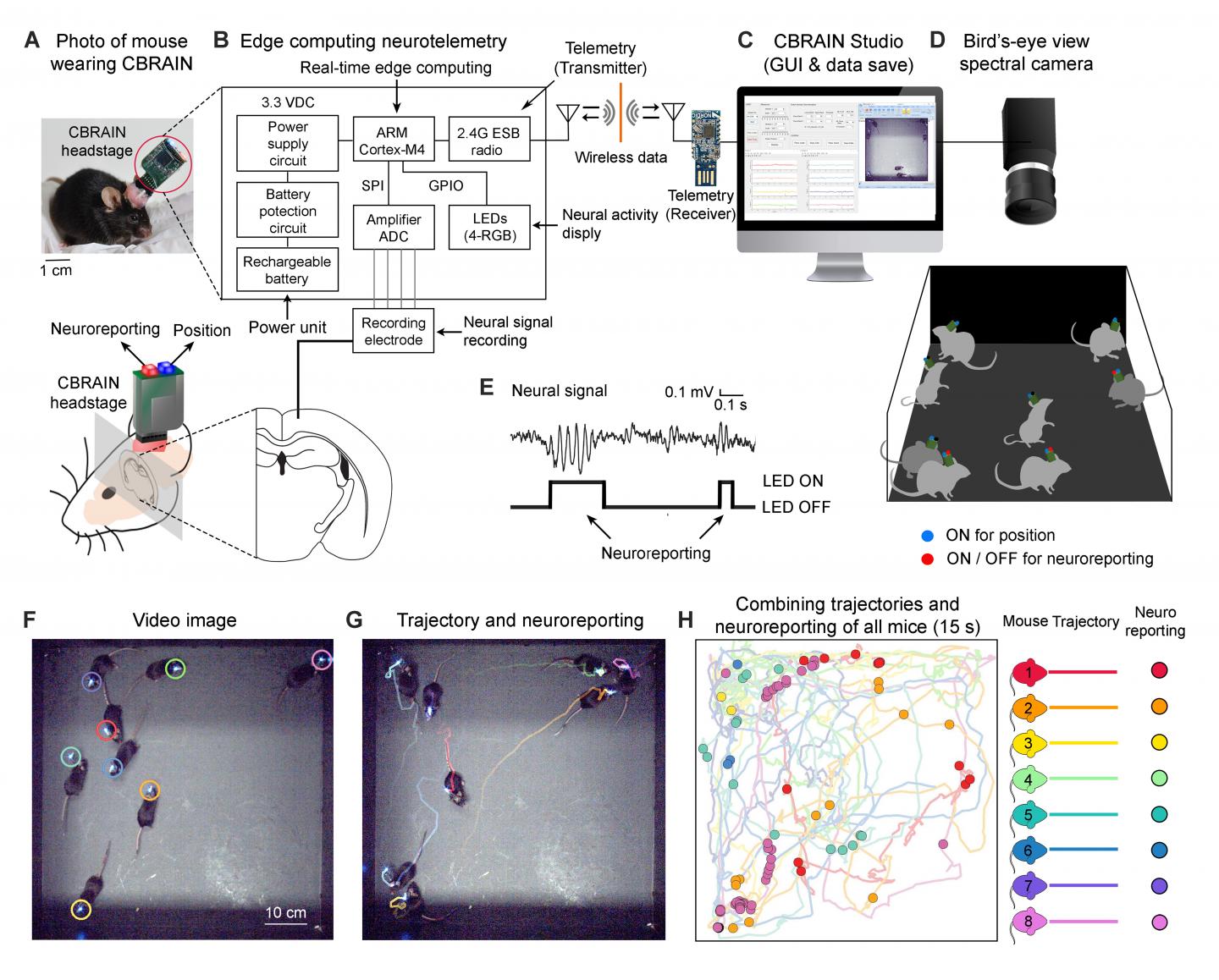 Living in a group has clear benefits. As a member of a societal group, one can share resources with the others, seek protection from predators, and forage in an efficient manner. In a 2020 paper published in Science Advances, the neuroscientist Jee Hyun Choi and her student Jisoo Kim of the Brain Science Institute in the Korea Institute of Science and Technology (KIST) argue that there are much more stories about the advantages of group living and social behaviors to the mammalian brain yet to be discovered. Their research was conducted using CBRAIN (Collective Brain Research Aided by Illuminating Neural activity), a unique neuro-telemetric device equipped with LED lights, which enables the measurement and real-time analysis of collective brain activities.

While many experiments were performed to determine the individual behaviors and stances under cost-benefit schemes, the question of how a group of animals form specific social behaviors has been receiving growing interests from the neuroscience community. Understanding how the individuals strategize to produce a concrete group behavior is central to understanding the social groups and their behavioral phenotypes. For instance, recent studies have found that the overall risk imposed on the predators during successful predation attempts is reduced when predation was coordinated as a group.

“In nature, animals are likely to encounter several threats during which behaving as a group may not be beneficial for all group members,” explains the senior author Jee Hyun Choi. “Indeed, forming a tight cluster may make some members difficult to avoid predators effectively. We aim to find the collective brain activities which represent behavioral phenotypes emerging from the group in a complex environment and render the brain-behavior link characterized among the group members.”

In collaboration with Sung Q Lee of the ETRI in South Korea, the research team developed CBRAIN, a wireless recording device with an edge-illuminated LED that fits on the head of a mouse. This tiny device was implanted in the subcortical brain to collect the voltage signals from specific sub-region of the amygdala called the basolateral amygdala (BLA), which is a brain area known to be highly sensitive to emotional stimuli such as stress and anxiety. When the frequency-specific rhythmic activity on the board occurs during a real-time scanning of the neural activities, the LED on the device is lightened up. These rhythmic events, along with the signals from a group of mice, are transmitted to a receiver. CBRAIN’s ability to generate a live report of collective brain activities is striking in contrast to other neural recording devices that analyze the signals after all experiments are completed.

Choi and her team developed experimental protocols to confirm the electrode coordinates and calibrated transient fast rhythms in BLA comprised of the gamma frequency range, called the gamma bursts, across mice. The researchers studied this bursting phenomenon during active and passive displays of fear when a large group of mice was under attack by a spider-like robot. Using CBRAIN, they observed that the occurrence of the gamma bursts during fear-driven behaviors were dependent on the social situations. Mice displayed less gamma bursts when they encountered the robot as a group, and the mice avoided and defended themselves against the robot in a group, just as they do in the nature.

Post-hoc analysis of the movement trajectories computed by deep learning tools revealed that the forms of aggregation are correlated with the gamma activities. While the mice at the edge of the cluster showed higher gamma activity, those located inside the group showed the level of gamma activity similar to the level when no robot was present. “The reduction of gamma bursts in amygdala might reflect the social buffering effect resulting from being together,” said Jisoo Kim, the first author of the paper. “However, testing the activity in various ecological situations and different population structures is required to reach a definitive conclusion.”

With respect to a newly developed technology and the prospect of socio-behavioral neuroscience, many neuroscientists are optimistic. “We analyze the data acquired by CBRAIN in a way identical to that of conventional neural recordings, but direct observation without first having to record and inspect data gives us a greater degree of freedom in discovering functions of specific brain activities,” concludes Choi. “I believe this work serves as an exemplary study highlighting the efficacy of real-time edge-lighting neural recordings of individuals in a group, and the instant linking of a brain and behaviors will expand our understanding of the motives behind complex social behaviors.”