For years, researchers have been working to identify risk factors and treatments to help slow the progression of Alzheimer’s disease. 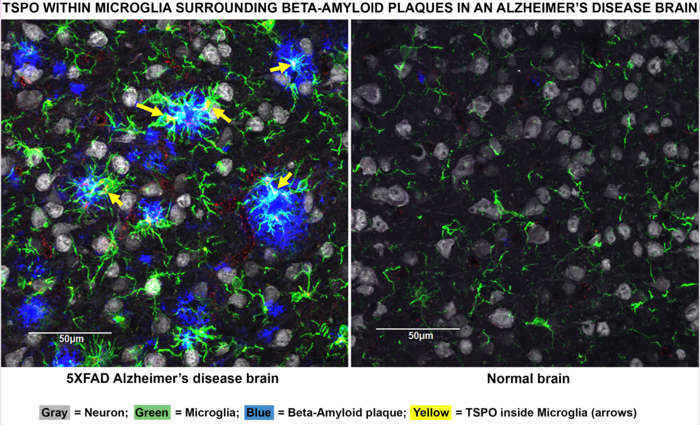 For years, researchers have been working to identify risk factors and treatments to help slow the progression of Alzheimer’s disease.

Failed clinical trials targeting Beta-amyloid plaques, which are found in the brains of people with Alzheimer’s disease, have led researchers to search for other targets to help the 6.5 million Americans currently living with the debilitating brain disorder.

Researchers at the Robert Stempel College of Public Health & Social Work at Florida International University are helping to identify those new targets. Supported by a new supplement grant from the National Institutes of Health (NIH), Tomás R. Guilarte and his team of researchers are zeroing in on the translocator protein 18 kDa (TSPO). The protein is nearly non-detectable in healthy brains but increases with neurodegenerative diseases like Alzheimer’s disease.

Guilarte knows the protein well – he has been working with it for over 25 years.  His early work was related to the validation and application of TSPO as a biomarker of brain injury and neuroinflammation. The protein is now used in brain imaging studies throughout the world to identify disease, track disease progression and assess the effectiveness of treatments.

During the last decade, his laboratory has worked to understand the function of TSPO in microglia – cells that work as the brain’s vacuum cleaner – and its potential role in Alzheimer’s disease. Microglia proliferate and migrate to sites of injury or infection to clean up debris from dead cells. Studies and evidence have shown that neuroinflammation, and the activation of microglia, play a critical role in the initiation and progression of Alzheimer’s disease. The mechanism for this association is not fully known, and that’s where Guilarte’s research team comes in.

“We want to understand if the increase in TSPO levels in the brain of Alzheimer’s disease subjects is helpful or harmful for the progression of the disease,” said Guilarte, who serves as the principal investigator of the grant and is dean and professor at Stempel College. “Our hypothesis is that an increase in TSPO may be harmful and help with the progression of the disease.”

He adds that confirmation of this possibility would be a significant discovery as TSPO can potentially be targeted with available drugs.

Recently, his team discovered an association between TSPO and NADPH Oxidase, an enzyme highly expressed in microglia that produces reactive oxygen species (ROS). An imbalance in ROS production can result in oxidative stress—a major player in the development of Alzheimer’s disease.

“In biology, proteins and cellular processes are designed to be helpful, but there are circumstances where they could become harmful. So, this could be a mechanism by which TSPO may become harmful,” Guilarte said.

Under the supplement grant, his team will use state-of-the-art molecular and cellular techniques to further explore the role of TSPO in microglia. They will create models that exhibit features of Alzheimer’s disease but with deletion of the TSPO gene. This will allow them to compare mouse models and examine for differences in the progression of the disease.

The team also is working with Francisco Lopera and Carlos Andrés Villegas, at the University of Antioquia in Medellin, Colombia, who will help to translate the studies from the laboratory to human tissue. Lopera, a neurologist, is world-renowned for his studies on a large cohort of Alzheimer’s subjects in Colombia who carry a gene mutation for early-onset Alzheimer’s disease.

“The availability of brain tissue samples from these Alzheimer’s patients is critically important in demonstrating that the findings from laboratory models of the disease also are present in humans with the disease,” Guilarte said.

An important link in this collaboration is Daniel Martinez Perez, a doctoral student in Guilarte’s lab that received his master’s degree from the neuroscience program led by Lopera.

Martinez is currently performing the TSPO studies in brain tissue from an Alzheimer’s animal model and from the Alzheimer’s subjects that have been followed by Lopera. This is an example of the global reach and collaborations Stempel College has developed in Colombia.

“What is surprising and amazing to me is that there is a lot more to be learned about this disease. There are still many questions that need to be answered,” Martinez said. “Together with the researchers from the University of Antioquia, we will be able to advance research and hopefully, one day, improve outcomes for Alzheimer’s patients.”