A new study published in PeerJ uses modern methods to understand the preservation of unique ichthyosaur fossils. One complete animal and one tail are the first to preserve outer body shape in the last, large group of ichthyosaurs. 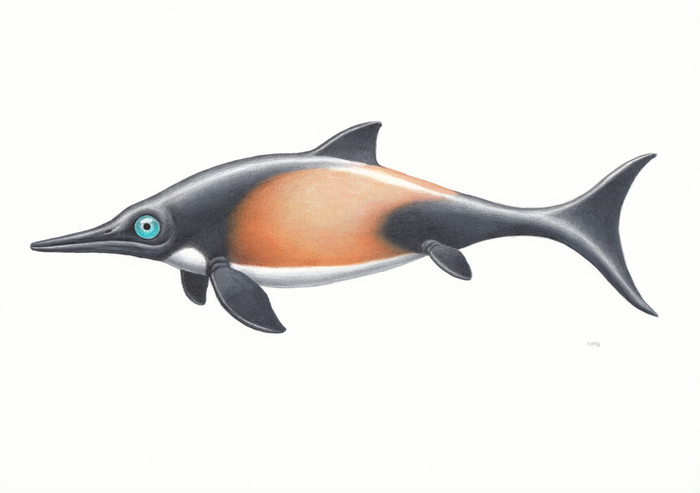 A new study published in PeerJ uses modern methods to understand the preservation of unique ichthyosaur fossils. One complete animal and one tail are the first to preserve outer body shape in the last, large group of ichthyosaurs.

Ichthyosaurs were marine reptiles living in the Age of dinosaurs. Their fossils are found all over the world, and they are famous for having a fish-like shape resembling today’s dolphins.

The Solnhofen area in Southern Germany is famous for its fossils from the Late Jurassic, which includes Archaeopteryx, usually recognized as the first bird, and numerous other animals, many of them preserved with soft tissues in addition to skeletons and teeth, which is rare in the fossil record.

The new peer-reviewed paper describes two ichthyosaur specimens from the Solnhofen area, approximately 150 million years old. They are housed in the Jura-Museum, owned by the Bishops Seminar Eichstätt. One ichthyosaur is a complete specimen, with the internal skeleton and an outline of the soft tissue around the body. The other is a complete tail fin. It is preserved with the tail vertebrae and the soft tissues around, confirming that ichthyosaurs also in this group had a moon-shaped tail, like their ancestors.

The research was carried out by a cross-disciplinary team of scientists. Lene Liebe Delsett, the lead author, and Jørn Hurum, have worked with marine reptiles for several years at the Natural History Museum in Oslo, Norway. Martina Kölbl-Ebert is a specialist on the Solnhofen area and its fauna. They worked with mineralogist Henrik Friis, who analyzed the soft tissue samples in order to see what it contained.

During or after death, the ichthyosaur landed on its back and side on the seafloor, and was covered in fine sediments. Little oxygen and quite a lot of luck preserved it until it was found and excavated in 2009. In the paper, the scientists do a first description of the specimen and start the process of understanding its soft tissue. In order to do so, they took small samples from the soft tissue in the tail and looked at it via X-ray crystallography and a scanning electron microscope. Because the skeletons and the rock they are preserved in, have almost the same colour, UV light was used for studying the shape of the bones to understand which type of ichthyosaur these are. They found that phosphate found in the tissues of the ichthyosaurs likely contributed to the preservation.It is not yet possible to identify all of the fossilized tissue types in the ichthyosaur, but the new study confidently confirms the preservation of skin and possibly connective tissue.  However, the major part of the matter that surrounds and covers the specimen is probably decomposed blubber.