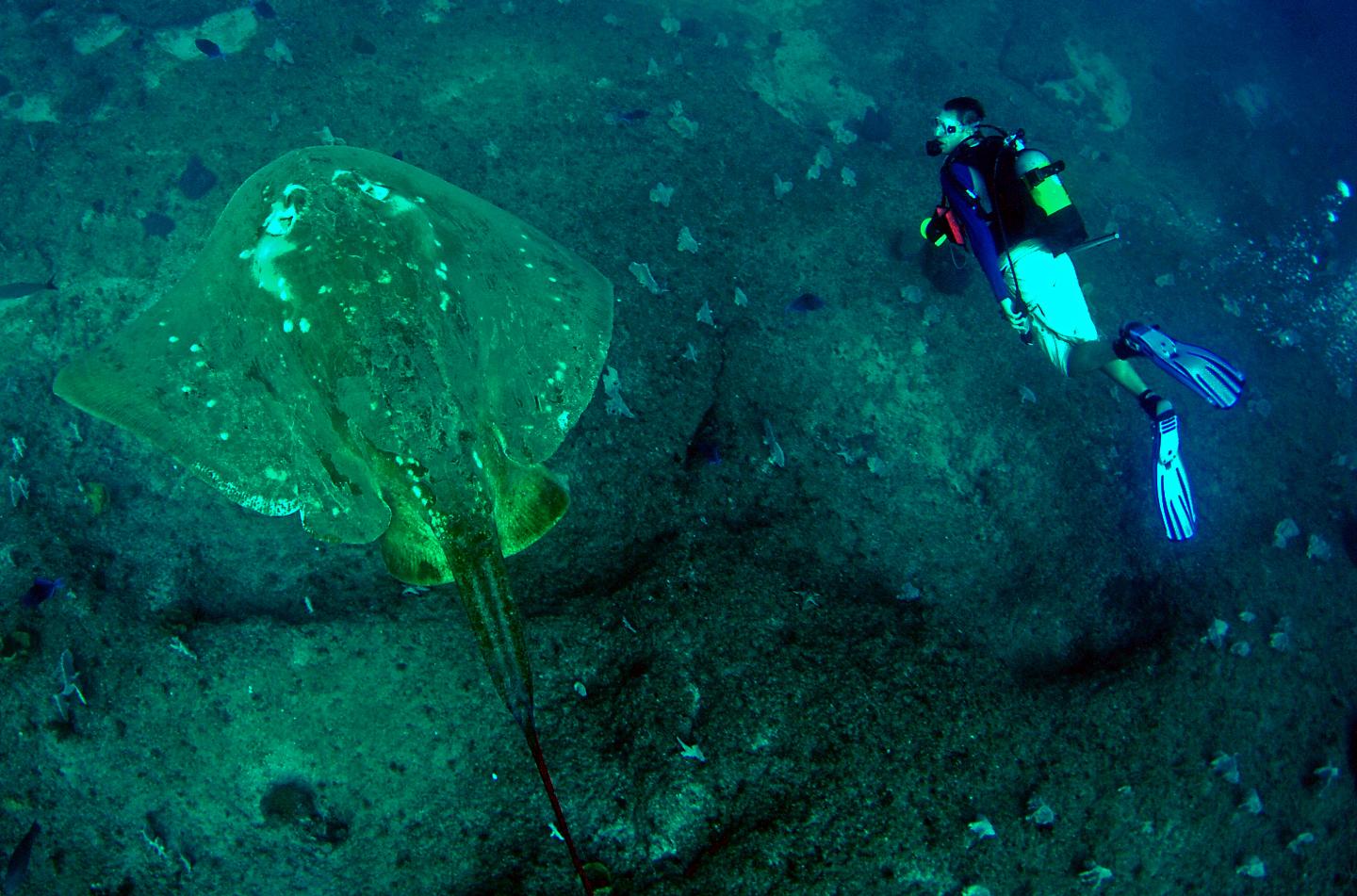 Smalleye stingrays are the largest marine stingrays on record, reaching disc widths of up to 222 cm, and yet almost nothing is known about them. Scientists from the Marine Megafauna Foundation have for the first time used photo IDs to study this elusive animal in southern Mozambique, one of the only locations where it is regularly seen in the wild. Their findings are published today in the journal PeerJ.

“We reported the first sightings of smalleye stingray in 2004 and have since been racing against the clock to learn more about their ecology before it is too late”, said Dr Andrea Marshall, co-founder and principal scientist of the Marine Megafauna Foundation. 31% percent of the world’s sharks and rays are threatened with extinction according to the IUCN Red List of Threatened Species ? due to lack of scientific effort and information, it has not been possible to evaluable the conservation status of smalleye stingrays to date. “This species of ray is likely in trouble too but we can’t protect what we don’t know much about. Our study is an important first step in understanding more about the animal’s ecology and behaviour”, she added.

“These mysterious giants are thought to be patchily distributed across the Indian Ocean and Western Pacific, but southern Mozambique is probably the best location to encounter them on inshore reefs”, Marshall added.

The marine biologists tested whether photographs of the stingrays’ (Megatrygon microps) white dorsal spots could be used to distinguish and track individuals over long periods of time.

“Through local dive centers, we called on tourists to help us collect images of this solitary stingray. Fortunately for us, southern Mozambique and its rich marine life attract many passionate scuba divers, most of which own GoPros or other lightweight cameras and will happily make their images and footage available for research”, said Atlantine Boggio-Pasqua who volunteered with the Tofo-based foundation.

She added: “Their contributions proved immensely valuable, we managed to gather more than 140 photographs suitable for comparison and identification, with some images dating as far back as 2003.”

The team was able to visually identify 70 different individuals, including 15 that had been seen on several occasions in the area. The dorsal spot patterns looked unchanged over the years indicating they may be permanent markings like in manta rays.

Boggio-Pasqua said: “Smalleye stingrays may look intimidating at first glance with their large, razor-sharp tail spines, but they’re actually really charismatic and easy to approach. We hope to receive many photo and video contributions from citizen scientists in future. They could tell us more about the species’ habitat preference as well as feeding and cleaning behavior.”

The encountered stingrays were often spotted at cleaning stations where reef bannerfish and other small fish appeared to be removing parasites from the rays’ skin.

The photographic study also provided a glimpse into the migratory behaviour of Megatrygon microps. Some individuals traveled hundreds of kilometers along the coastline, including a near-term pregnant female which traveled from Tofo to the Bazaruto Archipelago and back (200km in a minimum of 102 days and a total 400km return trip). She returned to Tofo, no longer visibly pregnant, suggesting this individual had pupped during her journey.

This proved to be the longest straight-line distance ever recorded for any species of whiptail stingrays (Dasyatidae family). Unlike other stingrays, smalleye stingrays are rarely seen resting on the seabed and are thought to be semi-pelagic.

Smalleye stingrays are likely under threat from increasing fishing pressures. Targeted and incidental catch in coastal gillnets and industrial purse seiners operating offshore are an ongoing issue in Mozambique.

“There are so many questions that remain unanswered about this rare species. Where do they live, how fast do they mature and how do they reproduce? Filling these knowledge gaps is crucial to figuring out how to protect them properly in Mozambique and other parts of the Indian Ocean”, concluded Dr Marshall.

Addressing the lack of available data will eventually allow scientists to formally assess the species’ conservation status in the IUCN Red List and inform management practices.

The study by Atlantine Boggio-Pasqua, Anna Flam and Andrea Marshall, titled ‘Spotting the “small eyes”: using photo-ID methodology to study a wild population of smalleye stingrays (Megatrygon microps) in southern Mozambique’ is published in the journal PeerJ on 11 June 2019 and is freely available here: https://peerj.com/articles/7110/

The family of whiptail stingrays (Dasyatidae) comprises more than 80 species including the smalleye stingray. Most species are significantly less mobile than Megatrygon microps.

For questions about this study and to arrange an interview, please contact:

The Marine Megafauna Foundation (MMF) was created in 2009 to research, protect and conserve the populations of threatened marine megafauna around the world.

Stressed corals set up progeny for a better life