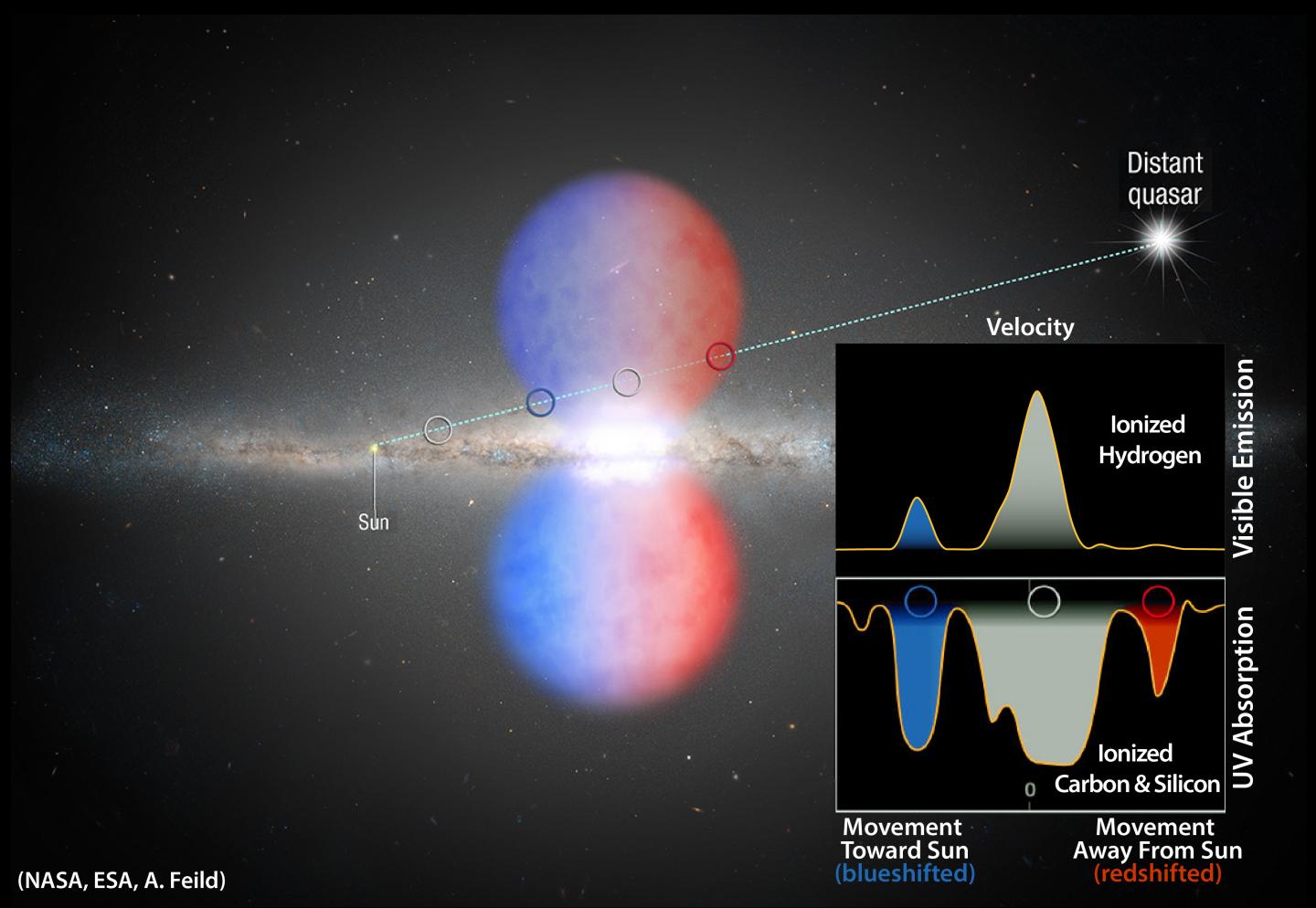 MADISON -Using the Wisconsin H-Alpha Mapper telescope, astronomers have for the first time measured the Fermi Bubbles in the visible light spectrum. The Fermi Bubbles are two enormous outflows of high-energy gas that emanate from the Milky Way and the finding refines our understanding of the properties of these mysterious blobs.

The research team from the University of Wisconsin-Madison, UW-Whitewater and Embry-Riddle Aeronautical University measured the emission of light from hydrogen and nitrogen in the Fermi Bubbles at the same position as recent ultraviolet absorption measurements made by the Hubble Telescope.

“We combined those two measurements of emission and absorption to estimate the density, pressure and temperature of the ionized gas, and that lets us better understand where this gas is coming from,” says Dhanesh Krishnarao, lead author of the new study and an astronomy graduate student at UW-Madison.

The researchers announced their findings June 3 at the 236th meeting of the American Astronomical Society, which was held virtually for the first time since 1899, in response to the COVID-19 pandemic.

Extending 25,000 light years both above and below the center of the Milky Way, the Fermi Bubbles were discovered in 2010 by the Fermi Gamma Ray Telescope. These faint but highly energetic outflows of gas are racing away from the center of the Milky Way at millions of miles per hour. But while the origin of the phenomenon has been inferred to date back several million years ago, the events that produced the bubbles remain a mystery.

Now, with new measurements of the density and pressure of the ionized gas, researchers can test models of the Fermi Bubbles against observations.

“The other significant thing is that we now have the possibility of measuring the density and pressure and the velocity structure in many locations,” with the all-sky WHAM telescope, says Bob Benjamin, a professor of astronomy at UW-Whitewater and co-author of the study. “We can do an extensive mapping effort across the Fermi Bubbles above and below the plane of the galaxy to see if the models that people have developed are holding up. Because, unlike the ultraviolet data, we’re not limited to just specific lines of sight.”

Matt Haffner, professor of physics and astronomy at Embry-Riddle Aeronautical University and a co-author of the report, says the work demonstrates the usefulness of the WHAM telescope, developed at UW-Madison, to tell us more about the workings of the Milky Way. The central region of our home galaxy has long been difficult to study because of gas blocking out view, but WHAM has provided new opportunities to gather the kind of information we have for distant galaxies.

“There are regions of the galaxy we can target with very sensitive instruments like WHAM to get this kind of new information toward the center that previously we are only able to do in the infrared and radio,” says Haffner. “We can make comparisons to other galaxies by making the same kind of measurements towards the center of the Milky Way.”