For over ten years the IceCube Observatory in the Antarctic has been monitoring the light traces of extragalactic neutrinos. While evaluating the observatory’s data, an international research team led by the Technical University of Munich (TUM) discovered a high-energy neutrino radiation source in the active galaxy NGC 1068, also known as Messier 77. 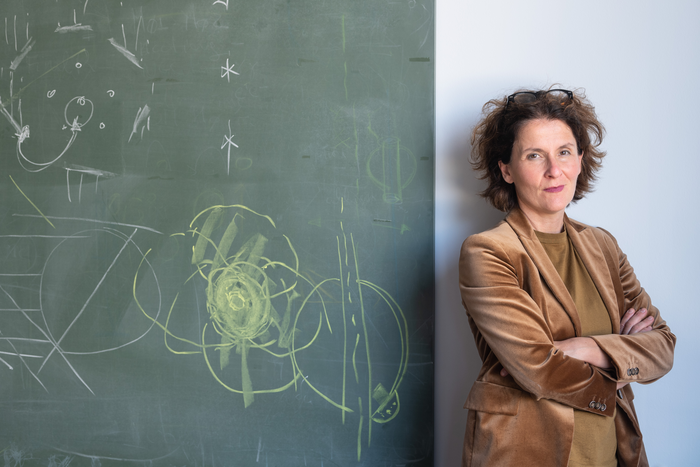 For over ten years the IceCube Observatory in the Antarctic has been monitoring the light traces of extragalactic neutrinos. While evaluating the observatory’s data, an international research team led by the Technical University of Munich (TUM) discovered a high-energy neutrino radiation source in the active galaxy NGC 1068, also known as Messier 77.

The universe is full of mysteries. One of these mysteries involves active galaxies with gigantic black holes located at their centers. “Today we still don’t know exactly what processes take place there,” says Elisa Resconi, Professor for Experimental Physics with Cosmic Particles at TUM. Now her team has made a major step towards solving this puzzle: The astrophysicists have discovered a high-energy neutrino source in the spiral galaxy NGC 1068.

It’s very difficult to investigate the active centers of galaxies using telescopes which detect visible light or gamma or X-ray radiation from space, because clouds of cosmic dust and hot plasma absorb the radiation. Only neutrinos can escape the infernos at the edges of black holes; these neutrinos have no electric charge and almost no mass. They permeate space without being deflected by electromagnetic fields or absorbed. This makes them very difficult to detect.

The greatest obstacle in neutrino astronomy has until now been the separation of the very weak signal from the strong background noise created by particle impacts from the earth’s atmosphere. It took many years of measurements using the IceCube Neutrino Observatory and new statistical methods to make it possible for Resconi and her team to accumulate enough neutrino events for their discovery.

Detective work in the eternal ice

The IceCube telescope, located in the ice of the Antarctic, has been detecting the light traces resulting from incident neutrinos since 2011. “Based on their energy and their angle of incidence we can reconstruct where they come from,” says TUM scientist Dr. Theo Glauch. “The statistical evaluation shows a highly significant cluster of neutrino impacts coming from the direction of the active galaxy NGC 1068. This means we can assume with a probability bordering on certainty that the high-energy neutrino radiation comes from this galaxy.”

The spiral galaxy, 47 million lightyears away, was discovered as early as the 18th century. NGC 1068 – also known as Messier 77 – resembles our galaxy in shape and size, but has a highly luminous center which is brighter than the entire Milky Way, although the center is only approximately the size of our solar system. This center contains an “active core”: a gigantic black whole with a mass of about one hundred million times that of our sun, which is absorbing large amounts of material.

But how and where are neutrinos generated there? “We have a clear scenario,” says Resconi. “We think the high-energy neutrinos are the result of extreme acceleration which the matter in the vicinity of the black hole undergoes, raising it to very high energies. We know from particle accelerator experiments that high-energy protons generate neutrinos when they collide with other particles. In other words: We’ve found a cosmic accelerator.”

NGC 1068 is the statistically most significant source of high-energy neutrinos to be discovered as yet. More data will be necessary in order to be able to localize and investigate weaker and more distant neutrino sources, says Resconi, who recently launched an international initiative for the construction of a neutrino telescope several cubic kilometers in size in the northeast Pacific, the Pacific Ocean Neutrino Experiment, P-ONE. Together with the planned second-generation IceCube observatory – IceCube Gen2 – it will provide the data for the neutrino astronomy of the future.

IceCube Collaboration: Evidence for neutrino emission from the nearby active galaxy NGC 1068