Fire-spawned forest fungi hide out in other organisms, study finds 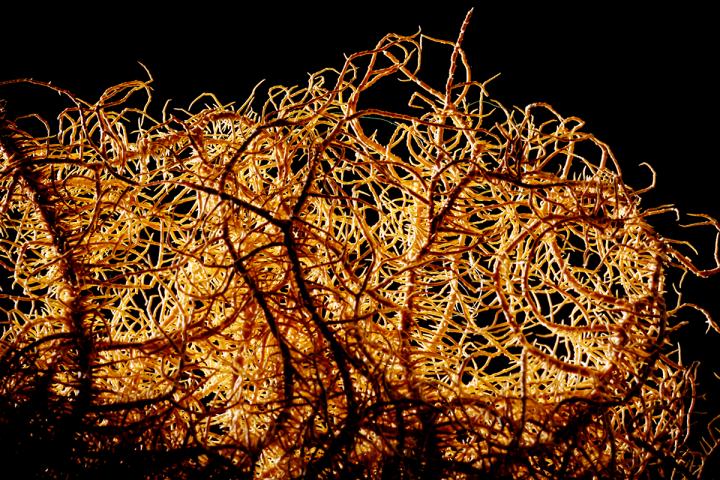 CHAMPAIGN, Ill. — When a wildfire obliterates a forest, the first life to rise from the ashes is usually a fungus – one of several species that cannot complete its life cycle in the absence of fire. Scientists have long argued about where and how such pyrophilous (fire-loving) fungi survive, sometimes for decades, between fires. A new study finds that some of these fungi hide out in the tissues of mosses and lichens.

The findings appear in the journal Fungal Ecology.

“We have this specific group of fungi that we see after a fire; they never occur before a fire,” said study co-author Andrew Miller, a mycologist with the Illinois Natural History Survey at the University of Illinois. “You’re only going to see the fruiting bodies – what most people recognize as a mushroom – after a fire.”

Scientists have come up with several hypotheses to explain where pyrophilous fungi live when they’re not reproductively active, Miller said. Some think the spores drift into a newly burned zone from elsewhere, but how those spores could develop in the absence of fire isn’t clear, he said. Some suggest the fungus is present in the soil, either as a spore or a storage organ that somehow lasts for decades between fires and isn’t consumed by fire.

“Our hypothesis was that some fungi are present in the pre-fire system in the bodies of mosses and lichens,” Miller said. “Then they become reproductive when the moss or lichen burns up.”

To test this hypothesis, Miller and his colleagues collected mosses, lichens and soil samples from burned and unburned areas in and around the Great Smoky Mountains National Park after a 2016 wildfire. Illinois postdoctoral scientist Daniel Raudabaugh led the research with Miller and University of Tennessee ecology and evolutionary biology professors Brandon Matheny and Karen W. Hughes.

Another possibility is that some of the fungal spores from the burned areas drifted into the unburned zones, leaving a DNA “signature” in the soil, Hughes said. The DNA might persist there longer than the spores could survive in the soil, she said.

“I see the moss or lichen as a protective capsule that gets burned away in a fire and the fungus is not severely harmed,” Raudabaugh said. “It will burn that outer coating off, and the fungus falls onto the soil and then starts growing.”

The researchers say there is more to learn about how the fungi persist in the environment.

“There are some things that we still don’t understand, such as how pyrophilous fungi live for decades inside mosses and lichens between fire events,” Matheny said. “However, evidence suggests that these fungi have taken up residence inside these other organisms on the forest floor, tree trunks or tree canopy, which has contributed to their lack of detection by traditional means.”

The Illinois Natural History Survey is a division of the Prairie Research Institute at the U. of I.

The paper “Where are they hiding? Testing the body snatchers hypothesis in pyrophilous fungi” is available online and from the U. of I. News Bureau.

How is physical activity associated with fracture risk in older women?

Use of emergency CPR device rising despite lack of evidence

Scienmag Mar 4, 2019
A new study by SISSA identifies the gene which regulates the production ratio of neurons and support cells during…