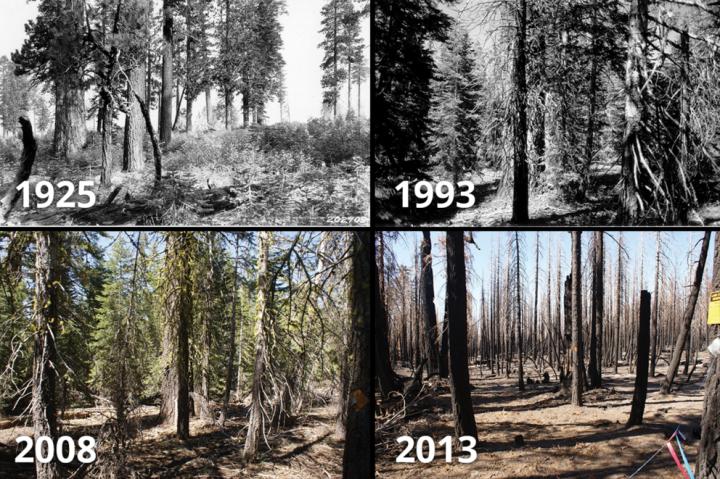 Firefighters battling wildfires in the western United States use a variety of suppression tactics to get the flames under control. Prescribed burns, or controlled fires intentionally set to clear shrubs and forest litter before a wildfire ever ignites, can make fire suppression operations almost three times as effective in limiting wildfire severity, according to a new study by researchers from Penn State, the U.S. National Park Service and the U.S. Forest Service.

“A lot happens once a fire starts burning,” said Lucas Harris, a postdoctoral scholar in geography at Penn State. “Crews on the ground remove vegetation and construct fire lines, and planes and helicopters drop flame retardant to stop the spread of the fire. In this study, we measured the effectiveness of suppression operations and previous prescribed fires on fire severity, which is something that really hasn’t been done before.”

The researchers measured tree mortality in Lassen Volcanic National Park, California, one year after the 2012 Reading Fire burned more than 28,000 acres in the park and nearby communities. They combined this data with data on fuels, vegetation and previous prescribed fires, and they worked with fire managers to reconstruct the suppression operations that took place during the fire.

The researchers classified the fire suppression operations as being of low, moderate or high intensity and ran computer simulations to determine tree mortality rates in the forest with and without operations. They ran similar computer models to measure the impact of prescribed burns. They report their findings in the International Journal of Wildland Fire.

“We know that prescribed fires reduce the potential for the next fire in areas where they’re used, and firefighters know them (these areas) as places where fire activity will be reduced and can use those areas as anchors to try to catch wildfires before they spread,” said Alan Taylor, professor of geography and ecology and associate in the Earth and Environmental Systems Institute at Penn State. “Prior to this study, no one looked at the combined effectiveness of fire suppression operations and prescribed fires and quantified how important this interaction is in terms of fire severity. Those operations wouldn’t have been as successful without the prescribed burns.”

The study results show that prescribed fires have a strong moderating effect and help to provide good anchor points for operations during a wildfire, Harris added.

Harris and Taylor attributed the success of the study to Taylor’s long-standing working relationships with local and federal partners in the area, especially with fire managers from the U.S. National Park Service and the U.S. Forest Service. They hope to continue working with these partners to conduct similar studies in other areas of California and the American West.

“This research demonstrates that the strategy of using prescribed fire to reduce potential fire activity and to facilitate fire suppression strategies works,” said Taylor. “Fire managers have known that prescribed fire works, but they haven’t been able to say how well it works. Here we’re saying that it works really well.”