A Brazilian study shows that the number of fires detected in the entire Amazon region between 2003 and 2020 was influenced more by uncontrolled human use of fire than by drought. According to the researchers, burning of vegetation to prepare areas for pasture and deforestation rather than extreme water deficits were the main cause of fire in most years with large numbers of fires. 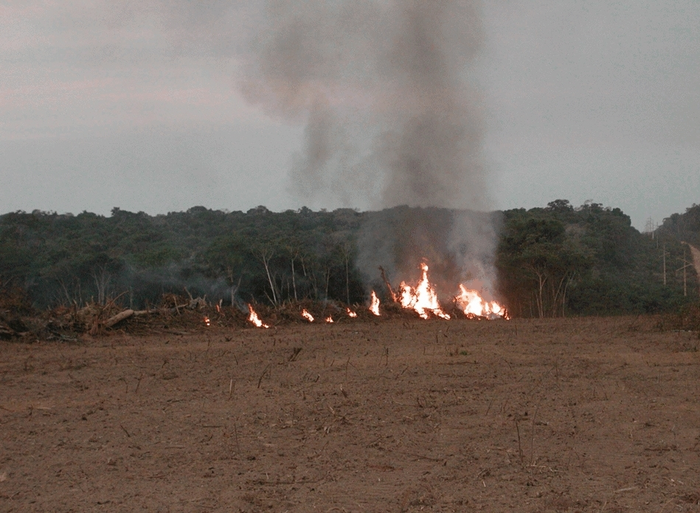 A Brazilian study shows that the number of fires detected in the entire Amazon region between 2003 and 2020 was influenced more by uncontrolled human use of fire than by drought. According to the researchers, burning of vegetation to prepare areas for pasture and deforestation rather than extreme water deficits were the main cause of fire in most years with large numbers of fires.

On average, pasture and other agricultural land accounted for 32% of annual burned areas in the Amazon, followed by natural grasslands with 29% and old-growth forests with 16%.

Of the nine countries with areas of Amazon Rainforest, Brazil and Bolivia accounted together for most of the fires detected in the region annually, with more than half and about a third respectively.

The lion’s share of the Amazon is in Brazil (63%), but the lowland tropical rainforest biome also extends into Bolivia, Colombia, Ecuador, Guyana, French Guiana, Peru, Suriname and Venezuela, each with between 9% and 6.5% of the total area, which is 6.67 million square kilometers.

An article on the study is published in a special issue of Global Ecology and Biogeography on the increasing threat posed to the world’s forests by fire.

The number of fires in the Brazilian Amazon is on the rise again. In the first nine months of 2022, especially in August and September, it was the highest since 2010, when 102,409 fires were detected, according to INPE. At the same time, since 2019 deforestation in the biome has reached the highest levels since 2009, surpassing 10,000 square kilometers per year. The trend continues, judging by the statistics available from DETER, INPE’s deforestation alert platform.

“The scientific literature on fire in the Amazon has tended to focus on the Brazilian portion of the biome. We extended the scope to the other countries in order to find out where fire is most critical and merits attention, particularly in light of the different land uses and types of plant cover. We concluded that fire is used in agriculture to renew the vegetation, mainly in pasturelands and especially in Brazil, but without proper fire management, heightening the risk of fire escaping into adjacent forest and causing wildfires,” said Marcus Vinicius de Freitas Silveira, a PhD candidate in INPE’s Earth Observation and Geoinformatics Division (DIOTG) and first author of the article.

For Luiz Eduardo Oliveira e Cruz de Aragão, head of DIOTG-INPE and last author of the article, the study innovates by taking all of Amazonia and almost 20 years of data as its scope. “By analyzing this long period, we were able to identify anomalies in the time series, such as 2020. The results show dissemination of the use of fire throughout the Amazon, both in clearing and burning the forest and for continuing management of pasturelands,” he said.

Aragão is the leader of the Tropical Ecosystems and Environmental Sciences (TREES) Laboratory and a participant in the FAPESP Research Program on Global Climate Change (RPGCC), which sponsored the study. Funding for the study was provided via three projects (16/02018-2, 20/16457-3 and 20/15230-5).

As noted by Aragão, 2020 is an “anomaly in the time series”. According to the study, environmental control operations in the region weakened in 2020, which followed the infamous 2019 Amazon fire season and was also a period when the COVID-19 pandemic was surging. In 2020, the total burned area in the Amazon was the largest since 2010, and burned area per active fire was the second highest of the time series despite a much lower area with an anomalously acute water deficit in comparison to the 2015-16 mega-drought, the authors write.

Another important Brazilian biome, the Pantanal – the world’s largest wetlands, with an area of 250,000 square kilometers, parts of which are in Argentina and Paraguay – was also devastated by unprecedented burning in 2020. The water surface area fell 34% more than the annual average in 2020, according to an article published in July 2022. Besides Aragão, its authors include Liana Anderson, penultimate author of the article on fire in the Amazon.

As in the tropical rainforest, the fires in the Pantanal were a consequence of the intensification of fire-related human activities, with 70% occurring on rural properties, 5% on Indigenous reserves and 10% in protected areas, according to the study, which was also supported by FAPESP.

For Anderson, the main short-term action required to reduce the risk of forest fires in the Amazon is eradicating illegal deforestation in the region and tackling the land grab problem. “Alongside this, training and dissemination of fire-free land management techniques are crucial to minimize the growing risk of major fires. Both the increasingly fragmented landscape and the warmer climate with less rain lead to heightened flammability,” she said.

Fires increased by 18% between January and September compared with the first nine months of 2021 in Maranhão, a Brazilian state located in the transition zone between the Amazon and the Cerrado, the country’s second-largest biome and also threatened in various ways. “As noted in our article, recent fire activity in the region is closely linked to deforestation, which has increased because of the weakening of both federal and state environmental controls,” said Celso Silva-Junior, affiliated with the State University of Maranhão (UEMA) and second author of the article.

Fire is one of the main types of disturbance responsible for degradation in the Amazon, with negative impacts on forest structure and dynamics, primarily because it impairs the forest’s capacity to capture carbon and releases stored carbon.

Fire also damages the health of the people who live in the region by intensifying air pollution and increases hospitalizations due to respiratory disease. According to a report produced by the Health Policy Research Institute (IEPS) in partnership with the Amazon Environmental Research Institute (IPAM) and Human Rights Watch, burning associated with deforestation in the Amazon led to 2,195 hospitalizations for treatment of respiratory disease in 2019, with 49% involving people aged 60 or more, and 21% involving babies up to a year old.

Pollution by smoke from forest fires in the Amazon, added to the dirt already in the air in big cities as well as low cloud, was responsible for changing day into night in São Paulo on August 19, 2019, despite the distance of 2,700 km to Manaus, the capital of Amazonas state (more at: agencia.fapesp.br/31290/).

In the most recent Global Ecology and Biogeography article, the researchers describe their analysis of time series for 2003-2020 compiled from records of active fires and burned areas, cross-referencing these to annual data for land use and cover, measuring the areas with anomalous levels of fire, drought and deforestation for every year, and identifying the spatial distribution of these anomalies in 2020, all based on a 10 km x 10 km grid covering the entire Amazon region.

The results showed that Brazil alone accounted on average for 73% of annual active fire detections in the Amazon between 2003 and 2020, followed by Bolivia with 14.5% and Peru with 5.3%.

When annual active fire detections in each Amazon region were divided by the total area of the region, the authors found that the highest density occurred in Bolivia, with an average of six active fires per 100 square kilometers per year, followed by Brazil with three.

In Brazil and Bolivia, active fires were more numerous in the 2000s and then fell, bottoming out in 2013-14 and rising again thereafter.

Cropland and pasture, natural grasslands, old-growth forests and wetlands other than flooded forests were the types of land use and cover that burned the most in the entire Amazon during the period, accounting respectively for 32%, 29%, 16% and 13% of total annual burned area on average.

Agricultural land also accounted for the largest proportion of total annual burned area in Brazil (48%) and Peru (51%). Old-growth forests burned most in Ecuador (76%), wetlands other than flooded forests in French Guiana (46.5%), and natural grasslands in the remaining Amazon regions (40% or more).

“Fire is used to prepare areas for crops or pasture, but fire is a hazard not only for the forest and its biodiversity but also for the sustainability of agriculture itself,” Aragão said. “The solution would be to develop strategic land use planning in all tiers of government and sectors of society, with training and assistance to use more advanced techniques.”

Amazon fires in the 21st century: The year of 2020 in evidence