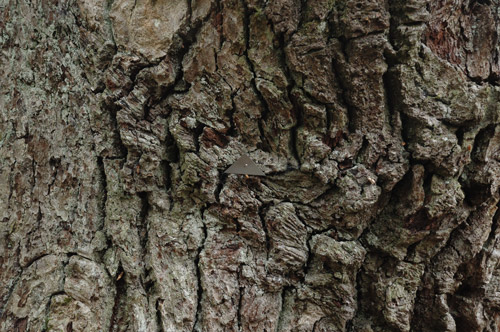 Spot the triangle! Against the complex bark of an oak tree, the artificial 'moth' is hard to find for birds and humans alike

Have you ever looked for something in a teenager's bedroom? Tough, isn't it? Everyday experience tells us that when the background is cluttered, it's harder to find an object. But how should we define "complexity" and can we apply the same concepts to other animals?

University of Bristol PhD student Feng Xiao and her supervisor, Professor Innes Cuthill, from the School of Biological Sciences, set about investigating this by giving the same visual search task to birds and humans. Their findings are published today in Proceedings of the Royal Society.

In the Leigh Woods nature reserve, on the other side of the famous Clifton Suspension Bridge from Bristol, they pinned identical artificial 'moths' to different trees.

The 'moths' were made of coloured paper that matched the average colour of the trees in the woodland and so were quite hard to spot. Being identical, the difficulty of finding these artificial prey varied only with the bark of the tree they were pinned to.

For birds, there was a dead mealworm under each paper triangle – the researchers checked the prey regularly and if the mealworm had gone then they knew that birds had spotted the prey.

To determine humans' ability to find the targets, they got volunteers to walk, separately and slowly, along the meandering path through the woods, searching for the paper triangles.

The volunteers were given a laser rangefinder so, if they spotted a 'moth', they stopped and fired the laser, giving the researchers the detection distance.

'Moths' that were hard to find were either missed altogether or only spotted when close up.

Professor Cuthill said: "Even though birds have very different, and better, colour vision than us, the results from birds and humans were similar.

"'The 'moths' that birds failed to find and eat tended to be the ones people missed or had to be very near in order to spot.

"Surprisingly the difference in colour between the ‘moths’ and the bark they were pinned to was not the main predictor of detectability, it was the complexity of the bark's texture.

"Moreover, a measure of visual complexity from the computer vision literature was the best predictor of search difficulty.

"This measure, 'feature congestion', has been used successfully in designing dashboards and pilot cockpit displays so that the important dials and warning lights are easy to spot."

The researchers have also shown that the same measures work for natural backgrounds and for other species.