Scientists around the world are researching how anti-cancer drugs can most efficiently reach the tumours they target. One possibility is to use modified bacteria as “ferries” to carry the drugs through the bloodstream to the tumours. Researchers at ETH Zurich have now succeeded in controlling certain bacteria so that they can effectively cross the blood vessel wall and infiltrate tumour tissue. 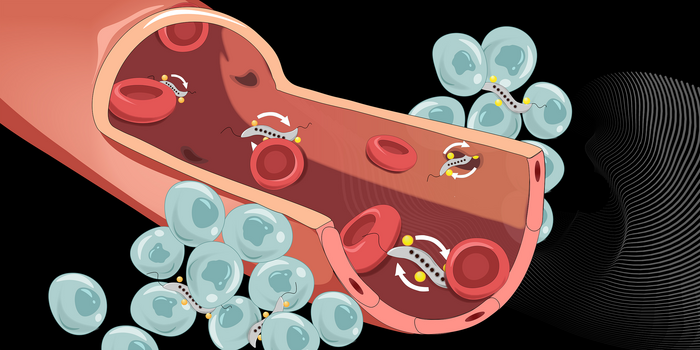 Scientists around the world are researching how anti-cancer drugs can most efficiently reach the tumours they target. One possibility is to use modified bacteria as “ferries” to carry the drugs through the bloodstream to the tumours. Researchers at ETH Zurich have now succeeded in controlling certain bacteria so that they can effectively cross the blood vessel wall and infiltrate tumour tissue.

Led by Simone Schürle, Professor of Responsive Biomedical Systems, the ETH Zurich researchers chose to work with bacteria that are naturally magnetic due to iron oxide particles they contain. These bacteria of the genus Magnetospirillum respond to magnetic fields and can be controlled by magnets from outside the body; for more on this, see an earlier article in ETH News [https://ethz.ch/en/news-and-events/eth-news/news/2020/12/magnetic-bacteria-as-micropumps.html].

The second and most critical reason is that bacteria driven by the rotating magnetic field are constantly in motion, travelling along the vascular wall. This makes them more likely to encounter the gaps that briefly open between vessel wall cells compared to other propulsion types, in which the bacteria’s motion is less explorative. And third, unlike other methods, the bacteria do not need to be tracked via imaging. Once the magnetic field is positioned over the tumour, it does not need to be readjusted.

“We make use of the bacteria’s natural and autonomous locomotion as well,” Schürle explains. “Once the bacteria have passed through the blood vessel wall and are in the tumour, they can independently migrate deep into its interior.” For this reason, the scientists use the propulsion via the external magnetic field for just one hour – long enough for the bacteria to efficiently pass through the vascular wall and reach the tumour.

Such bacteria could carry anti-cancer drugs in the future. In their cell culture studies, the ETH Zurich researchers simulated this application by attaching liposomes (nanospheres of fat-like substances) to the bacteria. They tagged these liposomes with a fluorescent dye, which allowed them to demonstrate in the Petri dish that the bacteria had indeed delivered their “cargo” inside the cancerous tissue, where it accumulated. In a future medical application, the liposomes would be filled with a drug.

Using bacteria as ferries for drugs is one of two ways that bacteria can help in the fight against cancer. The other approach is over a hundred years old and currently experiencing a revival: using the natural propensity of certain species of bacteria to damage tumour cells. This may involve several mechanisms. In any case, it is known that the bacteria stimulate certain cells of the immune system, which then eliminate the tumour.

Multiple research projects are currently investigating the efficacy of E. coli bacteria against tumours. Today, it is possible to modify bacteria using synthetic biology to optimise their therapeutic effect, reduce side effects and make them safer.

Yet to use the inherent properties of bacteria in cancer therapy, the question of how these bacteria can reach the tumour efficiently still remains. While it is possible to inject the bacteria directly into tumours near the surface of the body, this is not possible for tumours deep inside the body. That is where Professor Schürle’s microrobotic control comes in. “We believe we can use our engineering approach to increase the efficacy of bacterial cancer therapy,” she says.

E. coli used in the cancer studies is not magnetic and thus cannot be propelled and controlled by a magnetic field. In general, magnetic responsiveness is a very rare phenomenon among bacteria. Magnetospirillum is one of the few genera of bacteria that have this property.

Schürle therefore wants to make E. coli bacteria magnetic as well. This could one day make it possible to use a magnetic field to control clinically used therapeutic bacteria that have no natural magnetism.