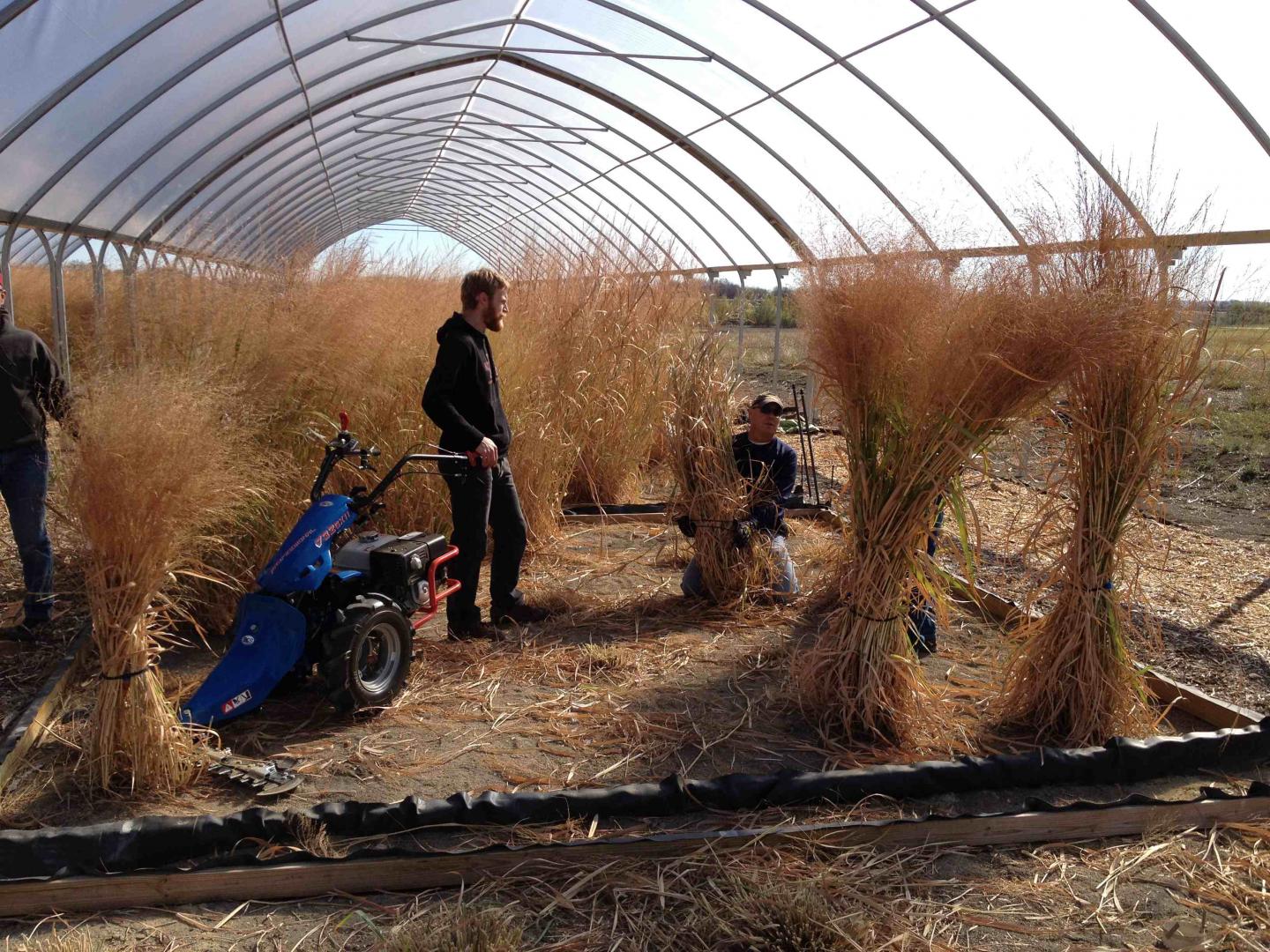 Gardeners and farmers around the country recognize that crop varieties grow best in certain regions. Most plant species have adapted to their local environments; for example, crop and ornamental seeds sold for the upper Midwest are often very different than those bred for Texas. Identifying and breeding varieties that have high productivity across a range of environments is becoming increasingly important for food, fuel and other applications, and breeders aren’t interested in waiting decades to develop new crops.

One example is an ongoing collaborative effort to improve the emerging bioenergy crop switchgrass (Panicum virgatum), which has established 10 experimental gardens located in eight states spread across 1,100 miles. Switchgrass is a perennial grass that quickly grows in a variety of soils and water conditions, standing taller than basketball star LeBron James. In each garden, switchgrass plants clonally propagated from cuttings represent a diverse collection sourced from half of the United States.

As reported January 27, 2021 in Nature, the team led by researchers at the University of Texas (UT) at Austin, the HudsonAlpha Institute for Biotechnology (HudsonAlpha), and the U.S. Department of Energy (DOE) Joint Genome Institute (JGI), a DOE Office of Science User Facility located at Lawrence Berkeley National Laboratory (Berkeley Lab), has produced a high-quality reference sequence of the complex switchgrass genome using samples collected at these gardens. Building off this work, researchers at all four DOE Bioenergy Research Centers (BRCs)–the Great Lakes Bioenergy Research Center (GLBRC), the Center for Bioenergy Innovation, the Center for Advanced Bioenergy & Bioproducts Institute, and the Joint BioEnergy Institute–have expanded the network of common gardens and are exploring improvements to switchgrass through more targeted genome editing techniques to customize the crop for additional end products.

The genetic diversity within this set of plants, each with a fully-sequenced genome, and these gardens allow researchers to test what genes affect the plant’s adaptability to various environmental conditions. “To accelerate breeding for bioenergy, we need to make connections between the plant’s traits and genetic diversity,” said John Lovell, an evolutionary biologist at HudsonAlpha and first author of the study. “For that, it’s necessary to have the plant’s genome as a reference. Additionally, having the gardens as a resource helps breeders find genetic regions of interest.” The combination of field data and genetic information has allowed the research team to associate climate adaptations with switchgrass biology, information that could be useful toward the DOE’s interest in harnessing the crop as a versatile candidate biomass feedstock for producing sustainable alternative fuels.

Common Gardens Are A Community Effort

The common gardens began nearly a decade ago with a proposal from UT-Austin’s Tom Juenger, a longtime JGI collaborator and a senior author on this study. The use of switchgrass as a feedstock for biomass-based fuels was initially fostered by DOE’s Bioenergy Research Centers, which initiated the sequencing of the switchgrass genome. DOE’s Billion Ton Report, identified potential switchgrass production areas across the U.S., guiding the location of the common gardens. “Gardeners and farmers fully understand that when you move plants outside of their native habitat or cold hardiness zones, they have different levels of performance,” Juenger said. “The novelty here is that we’re trying to actually figure out what’s causing those differences rather than just observing them. Can we quantify them? Can we tie them to the genome? We can use common garden plantings of clonally propagated plants to address these questions.”

Multiple collection methods were applied to gather the diversity of switchgrass plants represented in the gardens. “Tom gave me a truck and I drove all over Texas with a shovel,” recalled study co-author David Lowry, who started as a postdoctoral fellow in the Juenger lab and continues to work on the project from a lab at Michigan State University that is affiliated with the GLBRC. Additional samples came from U.S. Department of Agriculture stock centers, collaborators, and collections at other field sites. “This paper is a combination of really cutting-edge genomics and genetic analysis with large scale data collection,” he added.

Jeremy Schmutz, head of the JGI Plant Program, drew parallels between these common gardens and those previously grown for the DOE candidate feedstock poplar. “You’re collecting natural diversity and you’re planting natural diversity in multiple locations, and then you are extracting links between the genetic variation and phenotypic performance,” he said. Both switchgrass and poplar are JGI Flagship Plants.

Switchgrass has a large polyploid genome, which means most genes are found as multiple copies across the chromosomes. “In the past, we needed model systems to test genetic hypotheses in species with large and complex genomes,” said Lovell. “However, new sequencing technologies have allowed us to build the necessary genome resources to directly test for genes involved in biomass yield and climate adaptation in switchgrass, despite its physical size and genome complexity.”

Work on the switchgrass genome sequence started more than a decade ago. As sequencing technologies have advanced, assembly and annotation of the genome sequence has improved in parallel. For example, the current version of the genome is assembled into sequences of 5.5 million basepair (bp) in length, while the previous version had an average of 25,000 bp pieces. That’s the difference between assembling a 10,000-piece puzzle and doing the same puzzle with just 50 pieces.

The combination of new genetic tools and experimental gardens allow researchers to detect climate-gene matches, which can be exploited for accelerated crop improvement. “Because of the DOE’s long-term investment and the effort that has gone into this, people are going to be able to model further research on this complex species and also at the same time, take advantage of what we can do now with genomics to really make inroads into plant biology and improvements of switchgrass as the crop species,” Schmutz said.

The switchgrass genotypes that were planted into the common gardens were sequenced and assembled by the JGI, allowing the research team to conduct association mapping, linking genes to traits. One of the team’s findings is that the performance of switchgrass across the garden sites depended on the origin or collection location of the individual switchgrass plants. They were able to identify many regions in the switchgrass genome that are associated with genetic differences that lead to productivity in different environments.

For example, many plants collected from native habitats in Texas and other southern locales did not survive the cold winter of 2019 at the most northern common garden in South Dakota. Conversely, upper Midwest native switchgrass plants performed poorly at the southern common gardens in Texas. This reciprocal home site advantage is direct evidence of climatic adaptation. The team’s database of genes that underlie adaptation to climate provides breeders with a strong foundation to improve crop productivity under specific climates.

Sourcing plants from so many parts of the country also helped the team understand why some switchgrass plants from the Northeast have traits similar to those from the Midwest, even though their genomes were very different.

The high quality reference genome sequence of switchgrass is available on the JGI plant data portal Phytozome. This version can help breeders identify genomic regions of interest and directly introduce these features into new crop varieties. “It’s going to be important to have all this information in order to facilitate breeding going forward,” noted Lowry.

The team has received additional DOE funding to continue maintaining the gardens, which excites Juenger. “There will be a continuation of collecting data and information from these existing plantings, and then trying to leverage these discoveries to better understand how plants tolerate stresses and challenges in the natural environment,” he said. “There aren’t many efforts that have been able to study native perennial plants with these genetic and genomic resources, interweaved with this long longitudinal study perspective. Although it’s been this enormous investment to set up these gardens, we have them to study for a number of years. And that’s a real benefit for the research program.”

DOE’s Office of Science is the largest supporter of basic research in the physical sciences in the United States, and is working to address some of the most pressing challenges of our time. For more information, please visit science.energy.gov.