‘Fettuccine’ may be most obvious sign of life on Mars, researchers report 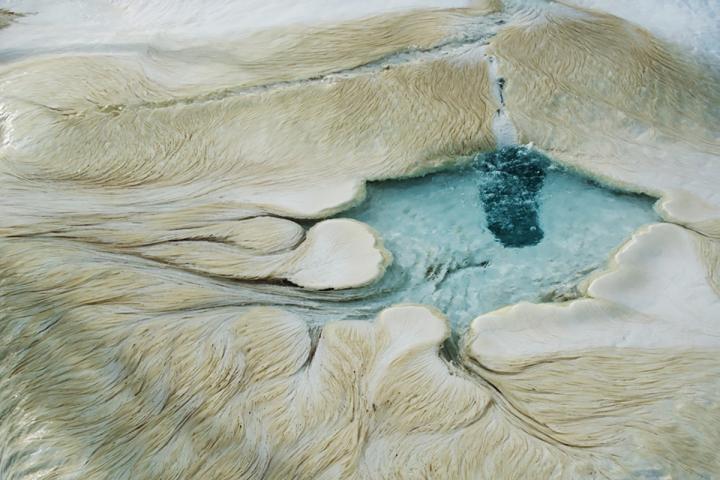 CHAMPAIGN, Ill. — A rover scanning the surface of Mars for evidence of life might want to check for rocks that look like pasta, researchers report in the journal Astrobiology.

The bacterium that controls the formation of such rocks on Earth is ancient and thrives in harsh environments that are similar to conditions on Mars, said University of Illinois geology professor Bruce Fouke, who led the new, NASA-funded study.

The bacterium belongs to a lineage that evolved prior to the oxygenation of Earth roughly 2.35 billion years ago, Fouke said. It can survive in extremely hot, fast-flowing water bubbling up from underground hot springs. It can withstand exposure to ultraviolet light and survives only in environments with extremely low oxygen levels, using sulfur and carbon dioxide as energy sources.

“Taken together, these traits make it a prime candidate for colonizing Mars and other planets,” Fouke said.

And because it catalyzes the formation of crystalline rock formations that look like layers of pasta, it would be a relatively easy life form to detect on other planets, he said.

The unique shape and structure of rocks associated with Sulfuri result from its unusual lifestyle, Fouke said. In fast-flowing water, Sulfuri bacteria latch on to one another “and hang on for dear life,” he said.

“They form tightly wound cables that wave like a flag that is fixed on one end,” he said. The waving cables keep other microbes from attaching. Sulfuri also defends itself by oozing a slippery mucus.

The team analyzed the microbial genomes, evaluated which genes were being actively translated into proteins and deciphered the organism’s metabolic needs, Fouke said.

The team also looked at Sulfuri’s rock-building capabilities, finding that proteins on the bacterial surface speed up the rate at which calcium carbonate – also called travertine – crystallizes in and around the cables “1 billion times faster than in any other natural environment on Earth,” Fouke said. The result is the deposition of broad swaths of hardened rock with an undulating, filamentous texture.

“This should be an easy form of fossilized life for a rover to detect on other planets,” Fouke said.

“If we see the deposition of this kind of extensive filamentous rock on other planets, we would know it’s a fingerprint of life,” Fouke said. “It’s big and it’s unique. No other rocks look like this. It would be definitive evidence of the presences of alien microbes.”

Fouke also is an affiliate professor of microbiology and of the Carl R. Woese Institute for Genomic Biology at the U. of I.

Videos of Sulfuri in hot springs are available here and here.

The paper “Physiology, metabolism, and fossilization of hot-spring filamentous microbial mats” is available online and from the U. of I. News Bureau.

Not all meat is created equal: How diet changes can sustain…