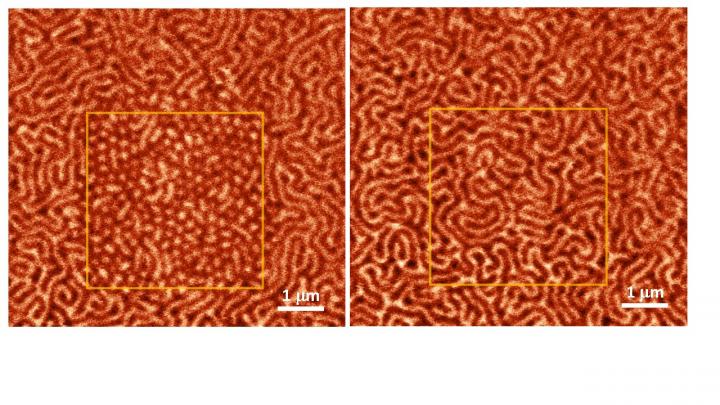 International scientific teams are intensively looking for alternative materials and approaches to replace silicon electronics devices based on CMOS technology (complementary metal-oxide-semiconductor). The major drawback of this technology is the size of contemporary transistors based on it. Physical impossibility to further miniaturizing them implies the future development of the electronics industry is under question.

One of the promising alternatives to CMOS transistors is thin-film magnetic materials with layers from one to several nanometers thick, in which skyrmions, nontrivial magnetic structures, are formed under certain conditions.

In the study, researchers claim they have designed close-packed stable arrays of skyrmions via affecting a thin-film magnetic structure by the local magnetic field of a magnetic force microscope probe.

Thus, the team pioneered topological nanolithography, getting nanoscale topological patterns where each individual skyrmion acts as a pixel, just like in digital photography. Such skyrmion pixels are not visible in the optical range and to decode them, as well as to create them, one needs a magnetic force microscope.

“Skyrmions driven by current pulses can be used as basic elements mimic the action potential of biological neurons to create neuromorphic chips. Arrays of chips with each tiny neuron element communicating with another one by means of moving and interacting skyrmions, will have energy efficiency and high computing power”, says Alexander Samardak, one of the authors of the research idea, FEFU Vice-President for Research. “Another interesting field is visual or topological cryptography. In that case, a message is encrypted as a topological pattern which is a set of ordered skyrmions. Deciphering such a message will require, first, knowledge of the coordinates of the nanoscale image and, second, the availability of a special gear as a magnetic force microscope with high sensitivity to stray fields of skyrmions. Attempting to hack the message with incorrectly selected parameters for reading the topological image will lead to its destruction. Currently, about 25 MB of information can be recorded on a square millimeter of a magnetic thin film. By reducing the size of skyrmions to 10 nm, a capacity of 2.5 Gb / mm2 can be achieved.”

The limitation of the approach is that the speed of recording of information with local point magnetic fields. It is still very slow, which curbs the approach from mass implementation.

Alexander Samardak said that the team learned how to regulate the size and density of the skyrmions packing, controlling the scanning step (a distance between two adjacent scanning lines) with a probe of the magnetic force microscope. It expands the possible future applications. For example, if the skyrmions have a size of less than 100 nanometers, they can be used as a base for reservoir computing, reconfigurable logic, and magnonic crystals which are the basis of magnonic processors and microwave communication devices in the sub-THz and THz range. Such devices will be much more energy-efficient compared to existing electronics. That paves the way for future green and high-performance data centers.

“Skyrmion can be a carrier of information bits. That is possible due to the skyrmion polarization, i.e. positions “up” or “down” which relates to well-known “0” or “1”. Hence, skyrmions can be basic elements for magnetic or racetrack memory. Such devices, in contrast to hard magnetic disks, will have no mechanical parts, bits of information will move by themselves. Moreover, ordered two-dimensional arrays of skyrmions can play the role of artificial magnonic crystals, through which not electric current but spin waves propagate transmitting information from a source to a receiver without heating the working elements,” Alexey Ognev says, the first author of the article, Head of the FEFU Laboratory for thin-film technologies.

Using the developed technology, scientists plan to scale down the size of skyrmions and develop practical devices based on them.