Fear or revere: Virginia Tech researcher dives into the complex history of the American alligator

Mark Barrow had to sink his teeth into the misconceptions. 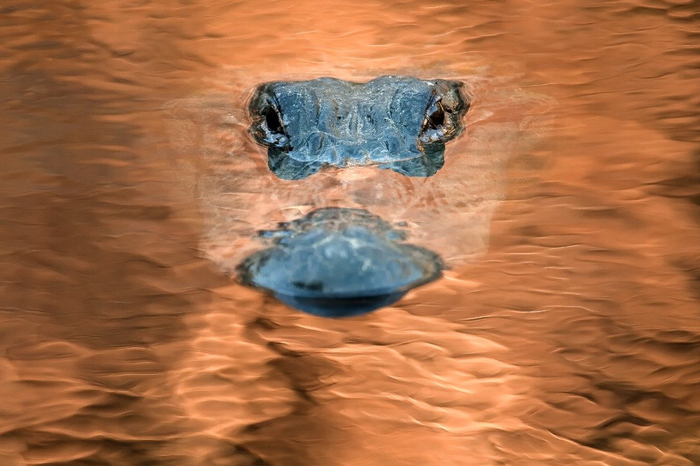 Credit: Photo by Mac Stone, a National Geographic Explorer and a 2006 Virginia Tech graduate in Spanish and international studies.

Mark Barrow had to sink his teeth into the misconceptions.

Popular narratives portray the American alligator as a fierce predator eager to devour humans in one bite. A ravenous reptile with 80 razorblades for teeth. Menacing jaws strong enough to crush the hood of a car. A muscular tail ready to launch a 500-pound, submarined beast hurdling toward unsuspecting prey on a swampy shoreline.

But Barrow sees more to the scaly swimmers. A professor in the Department of History, he carries a deep interest in the history of our perceptions of and interactions with wildlife.

The National Endowment for the Humanities helped fuel Barrow’s latest efforts: a deep dive into the cultural and environmental history of the American alligator. The grant will help Barrow complete his forthcoming book, “Alligator Tales: The Making of Florida’s Iconic Reptile.”

The book will center on humanity’s impact on alligators, historical depictions of the species, and how the reptile shaped Florida’s identity.

A native of Gainesville, Florida, Barrow’s fascination with the alligator began in childhood. “Both literally and figuratively, I grew up in gator country,” he said.

Barrow’s interest in the alligator fully ignited while he was studying the Endangered Species Act of 1973. The alligator, listed in the act as a species of primary concern for extinction, played a prominent role in debates surrounding the act’s passage.

“That was curious to me,” said Barrow. “The alligator galvanized concern about endangered species. I wondered how, then, could this species also be perceived as this pure predator bent on consuming humans?”

Reliable data on alligator attacks first emerged in the 1940s. Since then, 34 people have reportedly died from an encounter.

“The predominant vision we have of the alligator is a creature that is highly dangerous to humans. Yet, you’re much more likely to be injured driving to a place where alligators live than you are by an actual alligator,” said Barrow. “In reality, alligators actively try to avoid humans since they perceive us to be the threat.”

The alligator’s perception is justified. Hunters nearly eliminated the species in the early 1900s, prompting the inclusion of the alligator in the Endangered Species Act.

But alligators and humans coexisted long before the arrival of European settlers on land belonging to Native Americans. Barrow said he hopes to detail the complex — and sometimes contradictory — ways Euro-Americans, Native Americans, and African Americans have related to the alligator “not only as a frightening predator, but also a landscape symbol, commodity, trophy, mascot, pet, totem, endangered species, nuisance, and sentinel species.”

In his research, Barrow is engaging with a relatively new scholarly trend in the humanities called the “animal turn.” The method challenges researchers to advance beyond a totally human-centered perspective to better understand history and our complex relationship with the nonhuman world.

“The animal turn demonstrates the power and utility of taking animal agency seriously while centering nonhuman organisms in our historical narratives,” Barrow said.

Across more than 20 years, Barrow has collected a vast array of sources to explore the book’s historical and cultural themes, from archived newspaper articles and documentaries to tourist brochures, souvenirs, and postcards.

He’s devoting two chapters to how the alligator emerged as a marketing tool following the Civil War. Amusement parks, circuses, and fair promoters frequently touted their traveling alligators. The species “became the ‘star and leading attraction’ for seasonal tourists who began flocking to Florida in the late 1800s, initially on river steamboat excursions and then in the form of many popular attractions known as alligator farms,” said Barrow.

Simultaneously, hunters took part in a hide trade “that decimated the alligator population in the wild, leading to early predictions that the species would soon face extinction.”

Barrow also plans to describe the use of the alligator in perpetuating racism, particularly, he said, “how white people used the species as part of an ongoing campaign to control, oppress, and humiliate people of color.”

Claims that alligators had a penchant for the flesh of Black people began circulating in the mid-18th century, according to Barrow. The falsehoods amplified over the next 100 years with the circulation of images depicting caricatures of Black people being threatened or attacked by alligators.

Later in the book, Barrow will examine the brief, problematic trend of Americans keeping alligators as household pets. Live baby alligators became a popular souvenir for tourists returning from Florida in the late 1800s. One fashion trend even involved tying newly hatched gators to brooches as a form of animated jewelry, Barrow said.

Often, “pet owners” would quickly realize they didn’t want to cohabitate with alligators after all.

“Many alligators were released in the wild, a few were donated to zoos, and others were simply flushed down the toilet, leading to the pervasive myth about alligators inhabiting the sewers of New York City and other metropolitan areas,” Barrow said.

The book will also track efforts to save the alligator from extinction and how the species became “a kind of canary-in-the-coalmine warning about environmental dangers.”

Barrow will also investigate America’s modern relationship with the alligator. He will consider the symbolic use of the alligator by his alma mater, the University of Florida, which has become synonymous with its gator mascot. Barrow even plans to wade into online memes, such as the so-called “Florida Man” stories often focused on Floridians engaged in bizarre situations involving alligators.

With support from the National Endowment for the Humanities, Barrow hopes to complete his publication by the fall. He hopes the book’s revelations will offer a deeper understanding of an iconic yet misunderstood species.

“When we peer into the eyes of an alligator,” said Barrow, “what we see reflected back is as much a product of our own preconceptions and fears as the unvarnished reality of the creature that stands before us.”