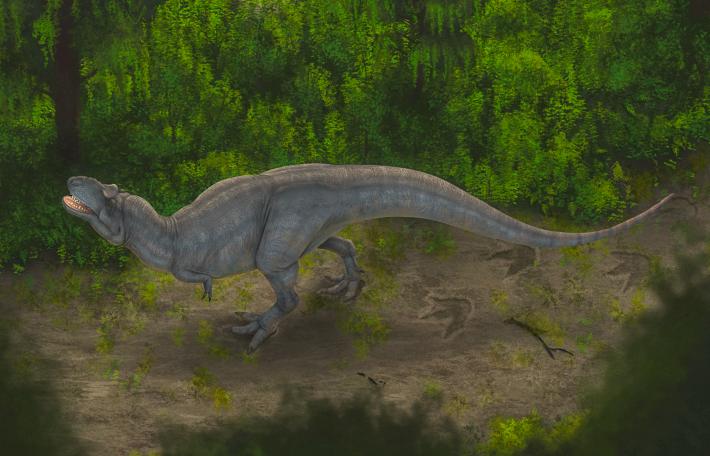 New research by the University of New England’s Palaeoscience Research Centre suggests juvenile tyrannosaurs were slenderer and relatively faster for their body size compared to their multi-tonne parents.

The research, published in the Journal of Vertebrate Paleontology, analysed a collection of fossilised tyrannosaur footprints to learn more about the way these animals aged and how they moved.

“Fully grown tyrannosaurs were believed to be more robust than younger individuals based on their relatively shorter hind limbs and more massive skulls, but nobody had explored this growth pattern using fossil footprints, which are unique in that they can provide a snapshot of the feet as they appeared in life, with outlines of the soft, fleshy parts of the foot that are rarely preserved as fossils.

Footprints can be ambiguous and hard to interpret correctly — the shape of a footprint may be influenced by the type of ground surface that is stepped on and the motions of the animal making the footprints. In addition, the exact identity of the animal may not always be clear. These challenges have previously limited the use of fossil footprints in understanding dinosaur growth.

The answer lay in the Grande Prairie region of Northern Alberta, Canada, where the research team worked with well-preserved samples of footprints of different sizes that are suggested to belong to the same type of animal.

“We explored a remote dinosaur footprint site where we discovered a new set of large carnivorous dinosaur footprints within very similar rocks to those which have produced tyrannosaur tracks in the past,” Mr Enriquez said.

“Based on the relatively close proximity between these discoveries and their nearly equivalent ages — about 72.5 million years old — we suggest they may indeed belong to the same species.

“We were also careful to assess the quality of preservation in each footprint, and only considered specimens which were likely to reflect the shape of the actual feet that produced them.”

Once the team had a suitable sample, they analysed the outlines of each specimen using a method called geometric morphometrics. This process removes the effect of overall size differences between each footprint and shows what the most important differences in track shape are.

“The greatest difference in shape was found to be the relative width and surface area of the heel impression, which significantly increased in size between smaller and larger footprints,” Mr Enriquez said.

“The smaller tracks are comparably slender, while the biggest tyrannosaur tracks are relatively broader and had much larger heel areas. This makes sense for an animal that is becoming larger and needs to support its rapidly increasing body weight. It also suggests the relative speed of these animals decreased with age.

“Increasingly bulky feet in the adults aligns with previous suggestions that juvenile tyrannosaurs would have been faster and more agile for their body size in comparison to their parents, and means that we can add footprints as another line of evidence in the debate over tyrannosaur growth.

“Lastly, it demonstrates the usefulness of footprints for investigating a potentially wider range of ideas about the lives of extinct species than has been considered previously.”