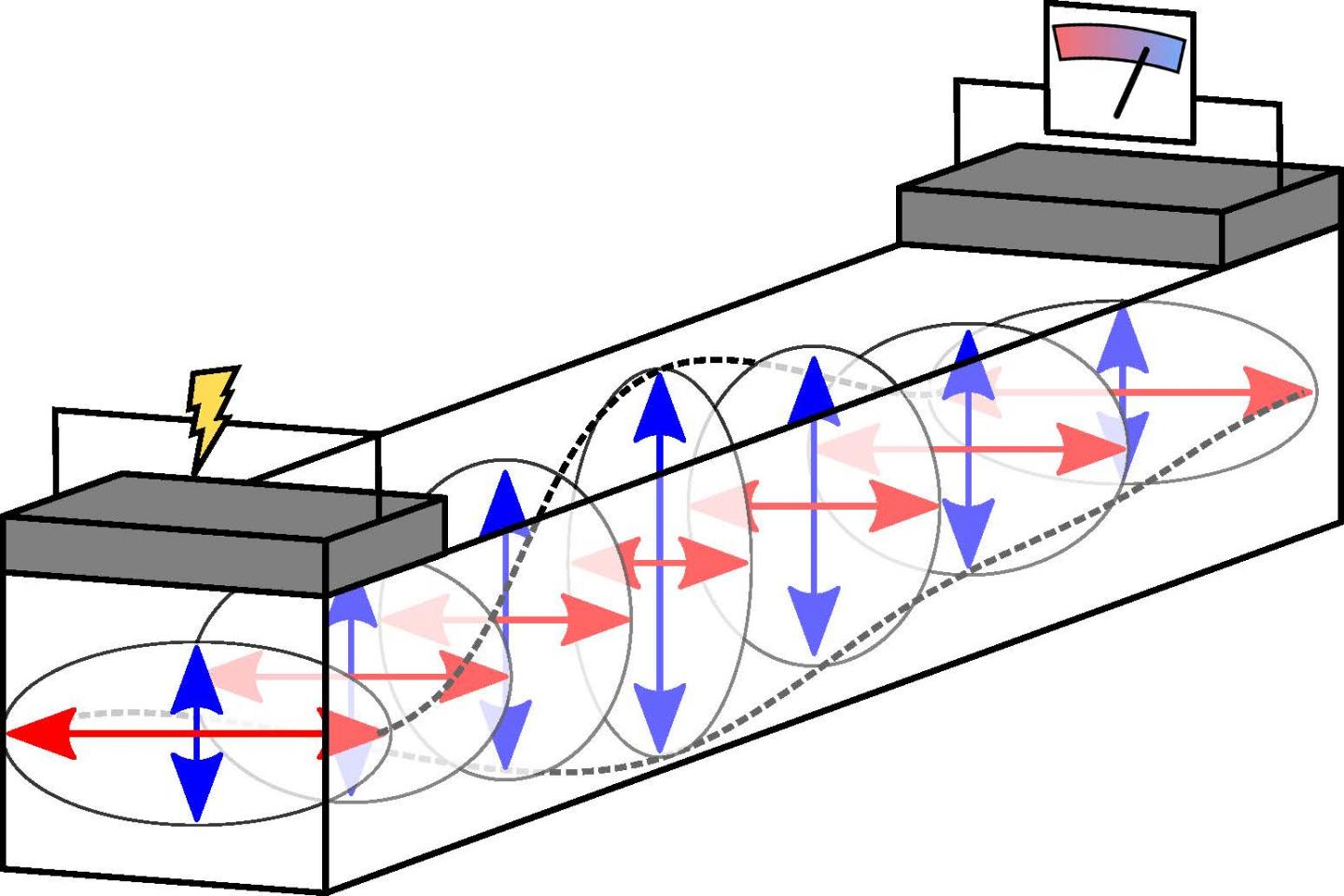 Be it with smartphones, laptops, or mainframes: The transmission, processing, and storage of information is currently based on a single class of material – as it was in the early days of computer science about 60 years ago. A new class of magnetic materials, however, could raise information technology to a new level. Antiferromagnetic insulators enable computing speeds that are a thousand times faster than conventional electronics, with significantly less heating. Components could be packed closer together and logic modules could thus become smaller, which has so far been limited due to the increased heating of current components.

So far, the problem has been that the information transfer in antiferromagnetic insulators only worked at low temperatures. But who wants to put their smartphones in the freezer to be able to use it? Physicists at Johannes Gutenberg University Mainz (JGU) have now been able to eliminate this shortcoming, together with experimentalists from the CNRS/Thales lab, the CEA Grenoble, and the National High Field Laboratory in France as well as theorists from the Center for Quantum Spintronics (QuSpin) at the Norwegian University of Science and Technology. “We were able to transmit and process information in a standard antiferromagnetic insulator at room temperature – and to do so over long enough distances to enable information processing to occur”, said JGU scientist Andrew Ross. The researchers used iron oxide (α-Fe2O3), the main component of rust, as an antiferromagnetic insulator, because iron oxide is widespread and easy to manufacture.

The transfer of information in magnetic insulators is made possible by excitations of magnetic order known as magnons. These move as waves through magnetic materials, similar to how waves move across the water surface of a pond after a stone has been thrown into it. Previously, it was believed that these waves must have circular polarization in order to efficiently transmit information. In iron oxide, such circular polarization occurs only at low temperatures. However, the international research team was able to transmit magnons over exceptionally long distances even at room temperature. But how did that work? “We realized that in antiferromagnets with a single plane, two magnons with linear polarization can overlap and migrate together. They complement each other to form an approximately circular polarization,” explained Dr. Romain Lebrun, researcher at the joint CNRS/Thales laboratory in Paris who previously worked in Mainz. “The possibility of using iron oxide at room temperature makes it an ideal playground for the development of ultra-fast spintronic devices based on antiferromagnetic insulators.”

An important question in the process of information transfer is how quickly the information is lost when moving through magnetic materials. This can be recorded quantitatively with the value of the magnetic damping. “The iron oxide examined has one of the lowest magnetic attenuations that has ever been reported in magnetic materials,” explained Professor Mathias Kläui from the JGU Institute of Physics. “We anticipate that high magnetic field techniques will show that other antiferromagnetic materials have similarly low attenuation, which is crucial for the development of a new generation of spintronic devices. We are pursuing such low power magnetic technologies in a long-term collaboration with our colleagues at QuSpin in Norway and I am happy to see that another piece of exciting work as come out of this collaboration.”

The research has been published recently in Nature Communications and was financed by the EU Research and Innovation program Horizon 2020, the German Research Foundation (DFG), and the Norwegian Research Council.

https://www.blogs.uni-mainz.de/fb08-iph-eng/ – Institute of Physics at JGU ;