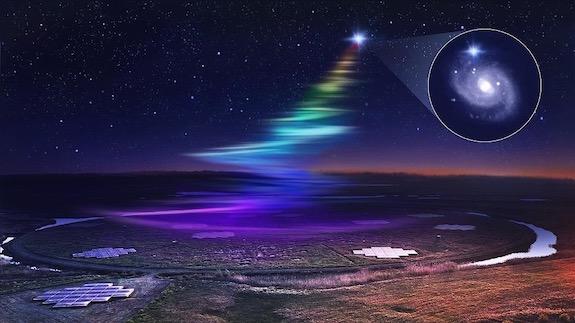 Since fast radio bursts (FRBs) were first discovered over a decade ago, scientists have puzzled over what could be generating these intense flashes of radio waves from outside of our galaxy. In a gradual process of elimination, the field of possible explanations has narrowed as new pieces of information are gathered about FRBs – how long they last, the frequencies of the radio waves detected, and so on.

Now, a team led by McGill University researchers and members of Canada’s CHIME Fast Radio Burst collaboration has established that FRBs include radio waves at frequencies lower than ever detected before, a discovery that redraws the boundaries for theoretical astrophysicists trying to put their finger on the source of FRBs.

“We detected fast radio bursts down to 110 MHz where before these bursts were only known to exist down to 300 MHz,” explained Ziggy Pleunis, a postdoctoral researcher in McGill’s Department of Physics and lead author of the research recently published in the Astrophysical Journal Letters. “This tells us that the region around the source of the bursts must be transparent to low-frequency emission, whereas some theories suggested that all low-frequency emission would be absorbed right away and could never be detected.”

The study focussed on an FRB source first detected in 2018 by the CHIME radio telescope in British Columbia. Known as FRB 20180916B, the source has attracted particular attention because of its relative proximity to Earth and the fact that it emits FRBs at regular intervals.

The research team combined the capacities of CHIME with those of another radio telescope, LOFAR, or Low Frequency Array, in the Netherlands. The joint effort not only enabled the detection of the remarkably low FRB frequencies, but also revealed a consistent delay of around three days between the higher frequencies being picked up by CHIME and the lower ones reaching LOFAR.

“This systematic delay rules out explanations for the periodic activity that do not allow for the frequency dependence and thus brings us a few steps closer to understanding the origin of these mysterious bursts,” adds co-author Daniele Michilli, also a postdoctoral researcher in the Department of Physics at McGill.

CHIME/FRB is a collaboration of over 50 scientists led by the University of British Columbia, McGill University, the University of Toronto, the Perimeter Institute for Theoretical Physics, and the National Research Council of Canada (NRC). The telescope is located in the mountains of British Columbia’s Okanagan Valley at the NRC’s Dominion Radio Astrophysical Observatory near Penticton. CHIME is an official Square Kilometre Array (SKA) pathfinder facility.

The research was funded by The Canada Foundation for Innovation and the governments of British Columbia, Ontario and Quebec, with additional funding from the Dunlap Institute for Astronomy and Astrophysics, the Natural Sciences and Engineering Research Council and the Canadian Institute for Advanced Research.

Founded in Montreal, Quebec, in 1821, McGill University is Canada’s top ranked medical doctoral university. McGill is consistently ranked as one of the top universities, both nationally and internationally. It is a world-renowned institution of higher learning with research activities spanning two campuses, 11 faculties, 13 professional schools, 300 programs of study and over 40,000 students, including more than 10,200 graduate students. McGill attracts students from over 150 countries around the world, its 12,800 international students making up 31% of the student body. Over half of McGill students claim a first language other than English, including approximately 19% of our students who say French is their mother tongue.