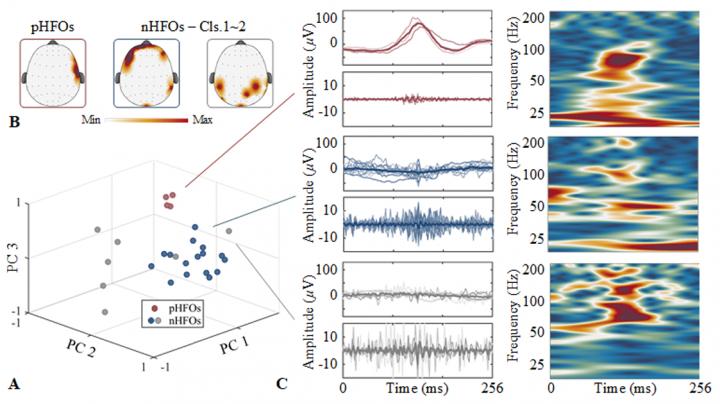 Professor Bin He’s team at Carnegie Mellon University, in collaboration with the Mayo Clinic, has discovered that fast oscillations in scalp-recorded electroencephalography can pinpoint brain tissues responsible for epileptic seizures. The collaborative research, recently published in the Proceedings of the National Academy of Sciences (PNAS), leverages noninvasive EEG technology along with the development of a novel machine learning algorithm to automatically identify and delineate concurrent high-frequency oscillations and epileptiform spikes, a key link related to epilepsy. In the near future, these findings may be harnessed to rethink imaging and treatment options for epilepsy patients.

More than 70 million people across the globe are affected by epilepsy, one of the most common neurological disorders. For people with epilepsy, brain activity becomes abnormal, causing seizures or unusual behavior, sensations, and sometimes loss of awareness. The incurable condition affects men and women of all ages, races, and ethnic backgrounds.

While medication is an effective treatment option for some, nearly one-third of epileptic patients do not respond well to medication. Many of these patients undergo surgical removal of the epileptic tissues to stop their seizures, if such epileptic foci can be identified in the brain and safely removed. The go-to clinical process to observe and localize epileptogenic brain activity, known as intracranial electroencephalography (iEEG), is invasive and involves drilling holes in the skull or removing a part of the skull, to place electrodes on the brain. Furthermore, iEEG recording is also time-consuming, lasting from days to weeks, until a spontaneous seizure occurs and can be monitored.

New groundbreaking research led by Bin He, professor of biomedical engineering at Carnegie Mellon University, in collaboration with the Mayo Clinic, combines clinical application and engineering innovation to present a safe, noninvasive, cost-effective, and quicker imaging option for patients with epilepsy.

Other researchers have attempted noninvasive EEG studies; however, He’s work is unique in that it discovers and automatically records a novel link between high-frequency oscillations (HFOs) and epileptiform spikes. The link, in turn, identifies a unique biomarker by which the epileptogenic brain can be delineated and localized, thus offering extremely desirable means for noninvasive management of epilepsy, as well as aiding with treatment options.

“Over the years, HFOs have been identified as a promising biomarker for localizing epileptogenic brain tissues and potentially guiding neurosurgery correlated with the origin of seizures,” explained He. “Challenges exist in that there are both physiological and pathological HFOs. Only pathological HFOs are tagged with epilepsy and helpful for clinical use, and unfortunately, differentiating between the two is highly-complicated using current practices and methods. Our team hypothesized and proved through morphological and source imaging evidence that pathological HFOs can be identified by the concurrence of HFOs and epileptiform spikes, all recorded noninvasively over the scalp.”

He’s collaborative study observed and recorded 25 patients with temporal epilepsy. Using a novel technology, the group was able to automatically identify the scalp recorded HFOs consistently cooccurring with epileptiform spikes and localize the corresponding cortical sources generating these events using source imaging techniques. In tandem, they also further validated the clinical value of using the identified pathological HFOs in determining the underlying epileptic tissues responsible for generating seizures, in comparison to clinical findings defined by epileptologists, and the surgical outcomes in the patients. He’s results demonstrated significantly improved performance of the new method with comparison to the conventional spike imaging method.

“This technology, if it advances to hospitals and medical centers, could be lifechanging,” said He. “It is completely safe and noninvasive, and it occurs over a much shorter timeframe. It is a truly exciting development that brings with it significant societal and financial implications.”

Looking ahead, the desire is to expand clinical studies and validate in more patients, with the eventual goal of having the technology adopted worldwide, across the healthcare industry.