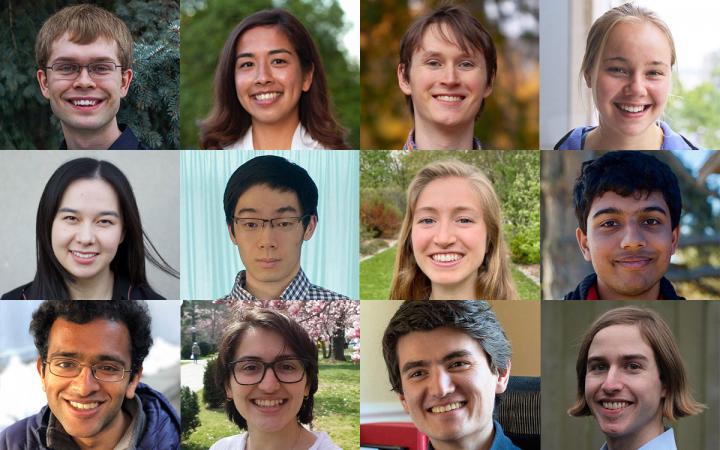 The Fannie and John Hertz Foundation, a nonprofit organization dedicated to empowering the most promising innovators in science and technology, has announced the 2021 recipients of the Hertz Fellowship.

This year’s fellowships will fund 12 remarkable PhD students who demonstrate the greatest potential to make an impact on significant challenges facing the nation and the world. The fellowship will directly support research aiming to improve treatments for cancer and neurodegenerative diseases, predict how Arctic glaciers will contribute to rising sea levels, use quantum science to drive social impact, and more.

“The 2021 Hertz Fellows embody the kind of transformative scientific talent our nation and world need now,” said Robbee Baker Kosak, president of the Fannie and John Hertz Foundation. “The fellows we’ve selected demonstrate an unusual capacity for creative exploration and problem-solving. We’re pleased to support their research and look forward to the impact these fellows will have on our future.”

Among the most generous awards of its kind, the Hertz Fellowship supports five years of graduate research and the freedom to pursue innovative ideas wherever they may lead. The fellowship empowers these extraordinary innovators at a pivotal point in their careers, helping to shape their scientific pursuits and accelerate real-world impact.

Hertz Fellows also receive lifelong professional support, including mentoring and networking with a connected, powerful community of more than 1,200 researchers who have been awarded the Hertz Fellowship since 1963.

Selected through a rigorous process, including in-depth interviews with leaders in science and technology, the 2021 Hertz Fellows have been chosen from a pool of more than 900 talented applicants around the country.

“We should never underestimate the power of innovation to address the most notable challenges facing our country and the world,” said Philip Welkhoff, senior fellowship interviewer and board member at the Hertz Foundation and the director for malaria at the Bill & Melinda Gates Foundation. “These students who are being awarded Hertz Fellowships are creative, independent, voracious learners, and focused on making an impact. These traits will serve them well as they continuously strive to innovate.”

The 2021 class joins a community of fellows comprising some of the nation’s most noted science and technology leaders, whose transformative research and innovation impact our lives every day. Hertz Fellows have increased the accessibility of ultrasounds with the invention of a low-cost handheld device and identified gene variants that may improve lung function in patients with cystic fibrosis. They are using machine learning to investigate problems ranging from disparities in COVID-19 testing to police discrimination. They have saved lives with a simple test that reveals fake pharmaceuticals, are influencing companies to institute environmentally sound practices, and have proven the Big Bang theory of the origin of the universe.

The Hertz Fellowship Class of 2021 will take part in live Zoom Q&A discussions on Wednesday, June 2, from 9:00 to 10:00 a.m. Pacific time, and Thursday, June 3, from 12:00 to 1:00 p.m. Pacific time. Moderated by Hertz Fellows and senior fellowship interviewers Megan Blewett and Adam Marblestone, these hour-long sessions provide members of the public with an opportunity to ask questions and learn about the work and motivations of the Hertz Fellows community.

Fellows are listed with their graduate university affiliation and field(s) of interest.

Milena Chakraverti-Wuerthwein (University of Chicago; Biophysical Sciences) – Milena Chakraverti-Wuerthwein is dedicated to deepening our understanding of the brain. As a PhD student at the University of Chicago, she will research the neural network involved in visually predicting movement, with the goal of explaining how functional structure in the brain impacts computation. A social activist who supports scientists from underrepresented backgrounds, she works with middle school and high school students, using their interest in gaming to inspire lifelong engagement with science, technology, engineering, and mathematics. She received a bachelor’s degree in physics from Princeton University in 2020.

Kartik Chandra (Massachusetts Institute of Technology; Computer Science) – Kartik Chandra applies tools built for machine learning systems in innovative ways to solve problems in visual computing. A senior and honors candidate at Stanford University, Chandra is studying computer science, physics, and English literature. His undergraduate research has led to a variety of publications and to open-source software projects used by thousands of engineers. He has also led STEM outreach programs around the San Francisco Bay Area and built software tools for computer science education that are used by K-12 schools across the country.

John Cherian (Stanford University; Statistics) – John Cherian is interested in the development of new statistical methods that accelerate scientific research. A first-year statistics PhD student at Stanford University, he serves as a statistical consultant to The Washington Post. He previously was a scientific associate at D. E. Shaw Research, where he was involved in the development of improved force fields for biomolecular simulation. Cherian received both a bachelor’s degree in mathematical and computational science and a master’s degree in statistics from Stanford University in 2017.

Charles Dove (University of California, Berkeley; Electrical Engineering and Computer Science) – Charles Dove uses artificial intelligence to harness the physics of light. A PhD student in electrical engineering at the University of California, Berkeley, Dove uses principles from machine learning and differentiable programming to create new methods for the simulation and fully automatic design of light-based devices, enabling significant growth in the scale, scope, and capabilities of nearly all light-based technology. The inventor of multiple technologies that combine electromagnetic wave physics and machine learning, he also has created and led hands-on STEM courses for underrepresented children and young adults. He received a bachelor’s degree in electrical engineering from Clemson University in 2020.

Emily Geyman (California Institute of Technology; Earth and Geological Sciences) – Emily Geyman studies perturbations to Earth’s climate across history in order to better predict the climate response to greenhouse emissions. Geyman has spent the last two years living in the Arctic Circle, Norway, as a Daniel M. Sachs Global Scholar at Princeton University. Using archives of aerial imagery, she has reconstructed changes in the volume and geometry of about 2,000 Arctic glaciers over the last century and is now developing models to simulate how glaciers will respond to a warmer, wetter climate and contribute to sea level rise in the coming century. She received a bachelor’s degree in geosciences from Princeton University in 2019 and will begin her PhD at California Institute of Technology in fall 2021.

Nathanael Kazmierczak (California Institute of Technology; Chemistry) – A PhD student in chemistry at the California Institute of Technology, Nathanael Kazmierczak seeks to encode and process information using individual molecules instead of electronics. His current research uses molecular quantum bits to sense chemical microenvironments, with implications for medicine, catalysis, and energy conversion. Kazmierczak received bachelor’s degrees in chemistry and music from Calvin University in 2020.

Allen Liu (Massachusetts Institute of Technology; Computer Science) – Allen Liu hopes to build a rigorous theoretical framework for understanding and developing machine learning algorithms. A PhD student in computer science at the Massachusetts Institute of Technology, he is working toward developing algorithms with provable guarantees for a variety of fundamental learning problems in areas like robust statistics and preference learning. Liu received a bachelor’s degree in mathematics from MIT in 2020.

Isabelle Yan Phinney (Harvard University; Chemical Physics) – Isabelle Yan Phinney explores condensed matter physics in the two-dimensional limit. A PhD student at Harvard University, Phinney is particularly fascinated by quantum spin liquids as a platform for experimentally realizing topological quantum computing. She also maintains a strong interest in highly tunable graphene-based moire systems, where in recent years phenomena such as superconductivity have been discovered. Phinney received a bachelor’s degree in physics from the Massachusetts Institute of Technology in 2020.

Katherine Ann Van Kirk (Harvard University; Physics) – Katherine Ann Van Kirk is passionate about finding ways to apply quantum science for social impact. She investigated bias in quantum machine learning while working toward a master’s in applied math from the University of Cambridge, and prior to attending Cambridge, she earned her bachelor’s degree in engineering physics from Stanford University in 2019. As an undergraduate, she discovered a hidden painting using infrared technology and ran an international nonprofit to empower women in tech leadership. She is now a physics PhD student at Harvard University.

Alexander Zlokapa (Massachusetts Institute of Technology; Physics) – Alexander Zlokapa focuses his research on combining techniques from theoretical physics and machine learning. A physics major at the California Institute of Technology, he collaborates closely with researchers at the Massachusetts Institute of Technology, Harvard University, the University of Southern California, and Google Quantum AI on developing new quantum machine learning algorithms and AI-based methods for simulating physical systems, such as wormholes, using current quantum technologies. In addition to his physics research, Zlokapa led a Caltech initiative to build machine learning forecasts of COVID-19. The collaboration of several hundred students provided policymakers and scientists with predictions of the pandemic’s spread in California and beyond.

The Fannie and John Hertz Foundation identifies the nation’s most promising innovators in science and technology and empowers them to pursue solutions to the world’s toughest challenges. Launched in 1963, the Hertz Fellowship is the most exclusive fellowship program in the United States, fueling more than 1,200 leaders, disruptors, and creators who apply their remarkable talent where it’s needed most–from improving human health to protecting the health of the planet. Hertz Fellows hold 3,000+ patents, have founded 200+ companies, and have received 200+ major national and international awards, including two Nobel Prizes, eight Breakthrough Prizes, the National Medal of Technology, the Fields Medal, and the Turing Award. Learn more at HertzFoundation.org.