Tsukuba, Japan—It’s often assumed that island plant and animal populations are just the simple, fragile cousins of those on the mainland. But now, researchers from Japan have discovered that island populations may be a lot tougher and more complex than previously thought. 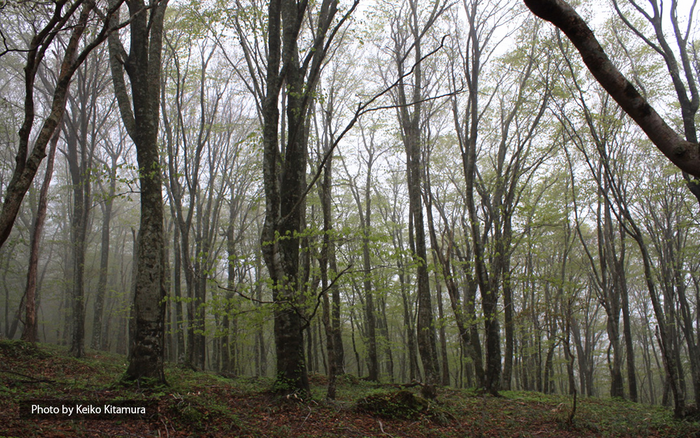 Tsukuba, Japan—It’s often assumed that island plant and animal populations are just the simple, fragile cousins of those on the mainland. But now, researchers from Japan have discovered that island populations may be a lot tougher and more complex than previously thought.

In a recently published study, a research group led by the University of Tsukuba has revealed that the northernmost island populations of Siebold’s beech, Fagus crenata, are older and genetically more diverse than expected.

“Although many island populations have existed for thousands of years or longer, the origins of some of them are still unknown,” says Professor Yoshiaki Tsuda, the main author of the study. “This includes Japan’s northernmost island populations of the native species F. crenata.”

The research group investigated populations of F. crenata on Okushiri Island in the Japan Sea, which is thought to have broken away from the mainland in the Middle Pleistocene (the Ice Age, which occurred 2.58 million to 11,700 years ago), and remained separate ever since. The northward spread of this species began on the mainland approximately 6,000 years ago, after the last glacial maximum (LGM). The researchers studied the genetics of the island’s populations and those of nearby regions, and found that the island’s populations had high genetic diversity, and may not have arisen from a single colonization event.

The Okushiri Island populations had a comparable number of private alleles (genetic sequences that are present in a single population and essentially absent in other populations) to the populations studied on nearby Hokkaido, which points to the existence of relict populations on Okushiri Island. A relict is a population of organisms that was more widespread or more diverse in the past in a restricted area.

Taken together with palaeoecological and vegetation studies, as well as the island’s geology, these results indicate that F. crenata persisted in cryptic refugia (places where climatically sensitive species can survive regardless of incompatibility with the regional climate) on the island.

“Our evidence indicates that populations of this species already existed on Okushiri Island prior to the LGM, and persisted there for longer than previously thought,” explains Professor Tsuda. The results of this study contribute to a growing body of evidence that island plant populations are more genetically diverse than previously estimated, which has implications for research and management of island species conservation, and the study of gene flow between island and mainland populations.

###
This study was supported by JSPS KAKENHI (JP17K07852 and JP20K06152) and Core-to-Core Program (Asia-Africa Science Platforms: JPJSCCB20220007) from the Japan Society for the Promotion of Science and the 27th Pro Natura Fund Grant Program from the Pro Natura Foundation Japan.

The article, “Possible northern persistence of Siebold’s beech, Fagus crenata, at its northernmost distribution limit on an island in Japan Sea: Okushiri Island, Hokkaido,” was published in Frontiers in Plant Science at DOI: 10.3389/fpls.2022.990927