Family dynamics: Molecules from the same family have different effects in cancer prognosis

Scientists observe that one molecule increases liposarcoma tumor cell spread and aggression while another molecule from the same family decreases migration and cell proliferation. 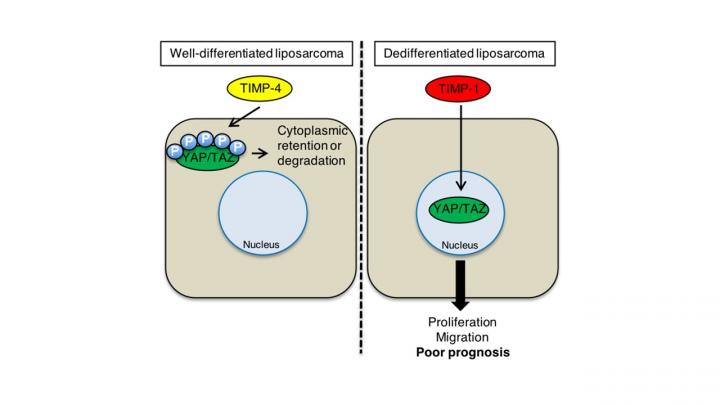 Researchers at Hiroshima University have found that different levels of two molecules of the same family–TIMP-1 and TIMP-4–can influence prognosis of liposarcoma.

High levels of TIMP-1 lead to a poor prognosis while high TIMP-4 indicates a less severe form of liposarcoma. This study, published in Carcinogenesis 10th May 2019, described the molecules’ mechanism of action through the YAP/TAZ pathway. Further research can lead to new treatments and better methods of diagnosis for liposarcoma.

TIMP (Tissue Inhibitor of Metalloproteinases) is a family of molecules that have been observed to have varying effects in different types of cancer. These molecules stop enzymes in a cell that degrade metalloproteins, which make up a part of the environment outside a cell. This environment keeps cells in place and makes it harder for them to move to other tissues. Assistant Professor Toshinori Ando (a member of the study group at Hiroshima University and currently at the University of California, San Diego) describes it as a “mesh” that you can’t easily move through.

“But once metalloproteinases [are] released from you [they] can cut through the mesh then make a road to the other side.” explains Ando.

Understanding this mechanism leads to the conclusion that TIMP expression is unfavorable to the cancer cell, as it stops the enzyme creating this road through the “mesh”. However, previous research revealed that one of the members of this family: TIMP-1 was highly expressed in various types of cancer including breast, pancreatic and brain cancer. Previous study by the research team at Hiroshima University found that TIMP-1 works as a promotor of tumor proliferation in many cancers.

Conversely, TIMP-4 presence was observed in normal fat cells and in the well-differentiated type of liposarcoma, leading the research team to conclude that the two molecules have opposite effects in liposarcoma aggressiveness. How they operated was poorly understood before this new study, according to Ando.

The research group observed cells grown from liposarcoma tissue; how they moved and replicated. Cells with high levels of TIMP-1 showed more proliferation and migration, while the opposite was true for TIMP-4. The mechanism behind the molecules’ behavior in liposarcoma is the activation or suppression of a pathway that is important for cell proliferation: the YAP/TAZ pathway. YAP/TAZ are proteins that promote cell proliferation and are activated in liposarcoma, especially in dedifferentiated type. TIMP-1 activates this pathway, which leads to tumor growth and spread, while TIMP-4 suppresses the pathway. In this study, the research team showed TIMP-1 promotes dedifferentiated liposarcoma cell proliferation through the YAP/TAZ pathway.

Understanding this mechanism can lead to new therapeutics, such as targeting TIMP-1 or increasing the amount of TIMP-4 in the cancer cells, speculates Ando. As these two molecules are present in the blood of cancer patients Ando also thinks that detecting the levels of these molecules can be helpful for predicting patient survival alongside diagnosis by biopsy.

Since its foundation in 1949, Hiroshima University has strived to become one of the most prominent and comprehensive universities in Japan for the promotion and development of scholarship and education. Consisting of 12 schools and 11 graduate schools, ranging from International Development and Cooperation to Integrated Arts and Sciences, the university has grown into one of the most distinguished research universities in Japan. English website: https://www.hiroshima-u.ac.jp/en

Scienmag Aug 29, 2019
Credit: NASA/Jacob Reed Hurricane Dorian is packing heavy rain as it moves toward the Bahamas as predicted by…

Software for diagnostics and fail-safe operation of robots developed…