Alfredo Giron, Ph.D., is first recipient of the award presented by the Marine Technology Society and the Walter Munk Foundation for the Oceans 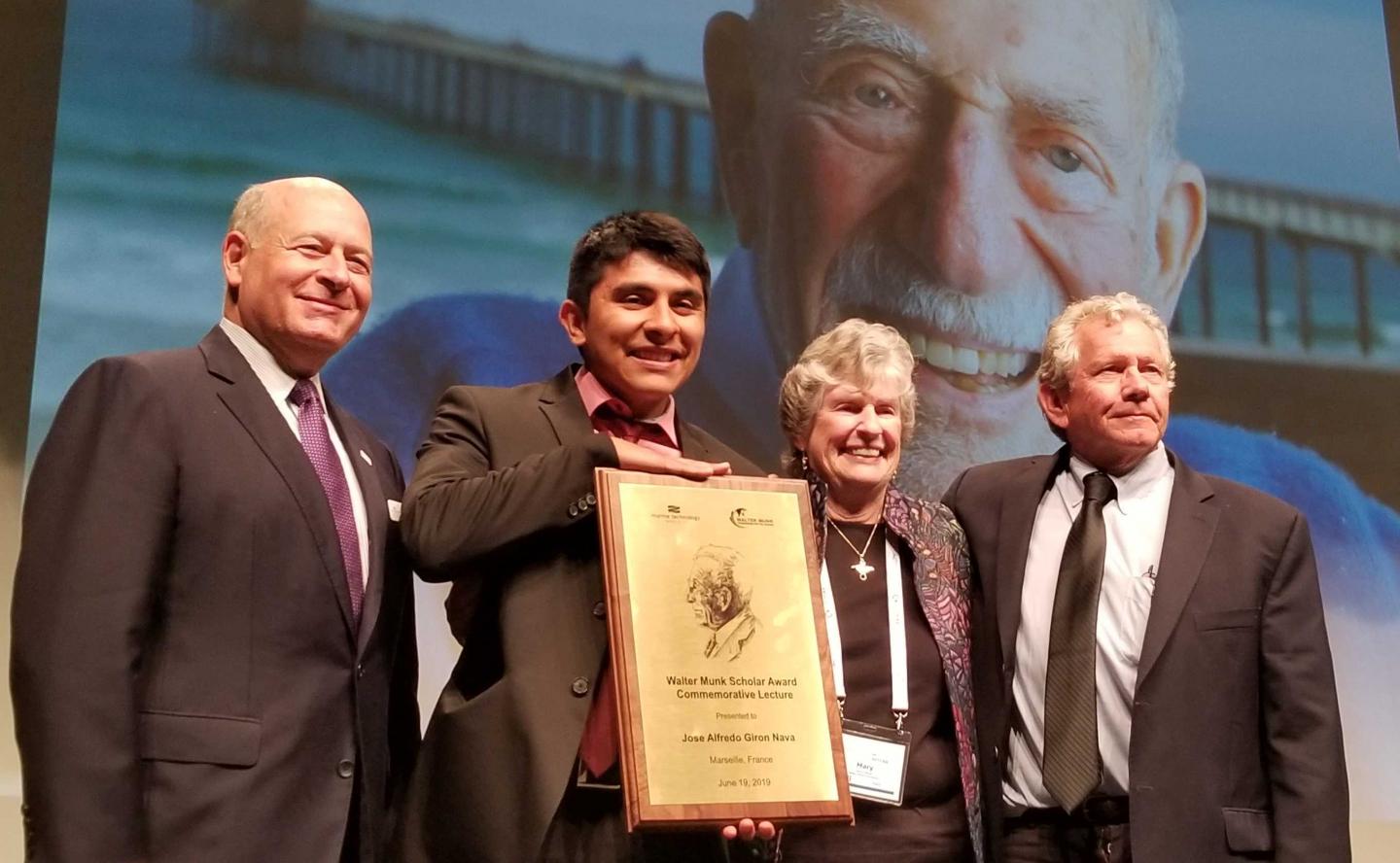 This week at the MTS-OES OCEANS Marseille conference, in France, the Marine Technology Society and the Walter Munk Foundation for the Oceans announced their establishment of the Walter Munk Scholar Award.

The newly created award honors Walter Munk’s legacy of daring exploration and discovery through ocean science and technology research as well as his dedication to ocean education and conservation.

Munk authored more than 200 scientific research papers from 1941 (“Internal Waves in the Gulf of California” in the Journal of Marine Research) to his last publication, 2015’s “Multipurpose Acoustic Networks in the Integrated Arctic Ocean Observing System.” His seminal work in wave forecasting was instrumental in planning the Allied Forces invasion of Normandy (D-Day) which hastened the end of World War II.

The award will be presented annually to a scholar enrolled in an undergraduate, graduate, or postdoctoral program in ocean science, technology, exploration or conservation, recognizing their outstanding achievements.

“MTS is honored to memorialize Walter’s legacy and help nurture the next generation of ocean leaders,” said Rick Spinrad, president of MTS.

The inaugural award was presented to Alfredo Giron at the OCEANS Conference in Marseille. Giron received his Ph.D. in March from the Scripps Institution of Oceanography. After receiving the award, Giron presented his commemorative lecture, “The Risk of Oversimplification in Fisheries Management.” This lecture was the first in what will become the annual Commemorative Walter Munk Scholar Lecture Series, presented by the award recipient at the annual conference.

“Reading about his life and his scientific achievements seemed like the greatest science novel ever written. And yet, all these biographies and research papers were only a very small part of what Walter truly represented (and still does). I feel very honored and humbled to receive an honor in his name,” said Giron.

Nominations for next year’s award will be accepted from January 1 – May 31, 2020. For eligibility and nomination instructions, visit http://www.mtsociety.org/awards-honors.

About the Marine Technology Society

Founded in 1969, the Marine Technology Society is a nonprofit international community of ocean engineers, technologists, policymakers and educators that provides the ocean community with forums for the exchange of information and ideas through international conferences, its peer-reviewed MTS Journal, newsletters and website, http://www.mtsociety.org.