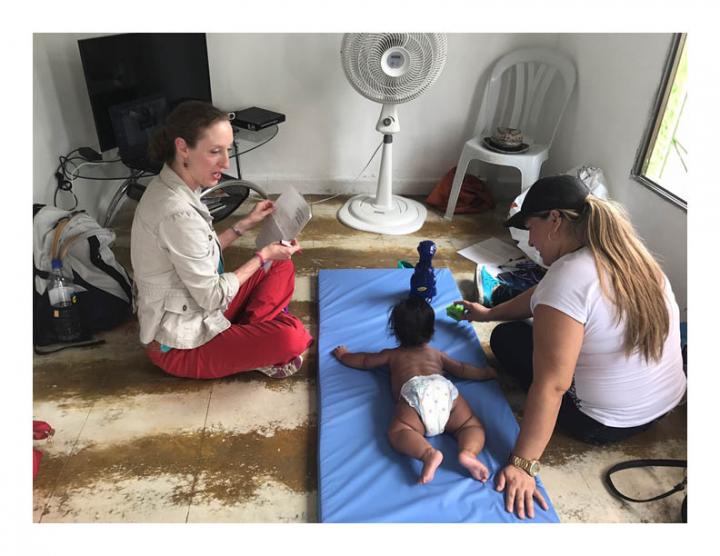 Colombian infants exposed to Zika virus in the womb showed neurodevelopmental delays as toddlers, despite having “normal” brain imaging and head circumference at birth, a finding that underscores the importance of long-term neurodevelopmental follow-up for Zika-exposed infants, according to a study published online Jan. 6, 2020, in JAMA Pediatrics.

“These infants had no evidence of Zika deficits or microcephaly at birth. Neurodevelopmental deficits, including declines in mobility and social cognition, emerged in their first year of life even as their head circumference remained normal,” says Sarah B. Mulkey, M.D. Ph.D., a fetal/neonatal neurologist at Children’s National Hospital and the study’s first author. ”

About one-third of these newborns who underwent postnatal head ultrasound had nonspecific imaging results, which we believe are the first published results finding a link between subtle brain injuries and impaired neuromotor development in Zika-exposed children.”

The multi-institutional research group led by Children’s National enrolled pregnant women in Atlántico Department, which hugs the Caribbean coast of Colombia, who had been exposed to Zika, and performed a series of fetal magnetic resonance images (MRI) and ultrasounds as their pregnancies progressed.

Even though their mothers had laboratory-confirmed Zika infections, 77 out of 82 of their offspring were born with no sign of congenital Zika syndrome, a constellation of birth defects that includes severe brain abnormalities, eye problems and congenital contractures, and 70 underwent additional testing of neurodevelopment during infancy. These apparently normal newborns were born between Aug. 1, 2016, and Nov. 30, 2017, at the height of the Zika epidemic, and had normal head circumference.

When they were 4 to 8 months or 9 to 18 months of age, the infants’ neurodevelopment was evaluated using two validated tools, the Warner Initial Developmental Evaluation of Adaptive and Functional Skills (a 50-item test of such skills as self-care, mobility, communication and social cognition) and the Alberta Infant Motor Scale (a motor examination of infants in prone, supine, sitting and standing positions). Some infants were assessed during each time point.

Women participating in the study were highly motivated, with 91% following up with appointments, even if it meant traveling hours by bus. In addition to Children’s National faculty traveling to Colombia to train staff how to administer the screening instruments, videotaped assessments, MRIs and ultrasounds were read, analyzed and scored at Children’s National. According to the study team, the U.S. scoring of Alberta Infant Motor Scale tests administered in Colombia is also unprecedented for a research study and offers the potential of remote scoring of infants’ motor skill maturity in regions of the world where pediatric specialists, like child neurologists, are lacking.

“Normally, neurodevelopment in infants and toddlers continues for years, building a sturdy neural network that they later use to carry out complex neurologic and cognitive functions as children enter school,” Dr. Mulkey adds. “Our findings underscore the recommendations by the Centers for Disease Control and Prevention that all infants exposed to Zika in the womb undergo long-term follow-up, providing an opportunity to intervene earlier.”

Funding for the research described in this post was provided by the Thrasher Research Fund, the National Institutes of Health under award Nos. UL1TR001876 and KL2TR001877, and the Leadership Education in Neurodevelopmental and Related Disorders Training Program under grant HRSA/MCHB T73 MC11047.

Formation of a huge underwater volcano offshore the Comoros