Factors including extreme winds, topography and vegetation influenced the severity of burns from Oregon’s devastating 2020 megafires

In early September 2020, severe winds, high heat, and prolonged drought conditions led to the explosive growth of wildfires along the western slopes of the Cascades Mountains in the Pacific Northwest. The fires engulfed enormous tracts of forestland, destroyed communities, took dozen of lives, and cost hundreds of millions to fight. 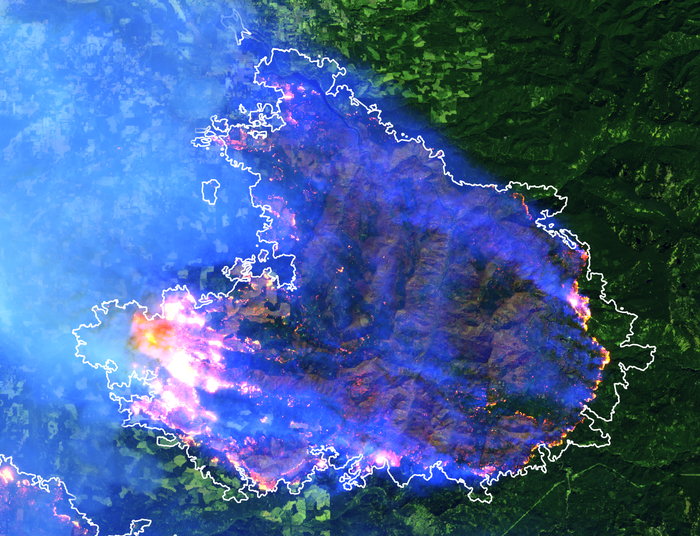 In early September 2020, severe winds, high heat, and prolonged drought conditions led to the explosive growth of wildfires along the western slopes of the Cascades Mountains in the Pacific Northwest. The fires engulfed enormous tracts of forestland, destroyed communities, took dozen of lives, and cost hundreds of millions to fight.

In a first-of-its-kind study examining burn patterns from the 2020 Labor Day fires, researchers at Portland State University studied the influence of weather, topography, vegetation and other factors on burn severity in areas where the fires killed more than 75% of the trees. Their research confirms that extreme winds over the Labor Day holiday were the primary driver of the destructive force of the fires yet demonstrates how forest vegetation structure (e.g., canopy height, the age of trees, etc.) and topography played a significant role in burn severity patterns.

The paper, “Extreme Winds Alter Influence of Fuels and Topography on Megafire Burn Severity in Seasonal Temperate Rainforests under Record Fuel Aridity,” was recently published in the journal Fire.

According to the study’s co-author, Andrés Holz, associate professor of geography at Portland State, the wet temperate forests of the Cascade Mountains in the Pacific Northwest have a history of experiencing megafires of the scale of those that burned in 2020, but none had occurred since the early twentieth century. Because the scope and scale of the burns were unprecedented in modern times, they provided the research team a unique opportunity to gain a better understanding of the factors that influence the high severity of burns in these rainforests, including those on the western slopes of the Cascades. That understanding can inform planning for future land-use management in forestlands and the social and ecological impacts of extreme fire events in the context of a warming planet.

The research team developed maps for the extent and burn severity for five megafires and examined fire activity over two time periods: September 7-9, 2020, during which extreme winds fueled the explosive growth of the fires, and September 10-17, 2020, during which the fires continued burning under calm wind conditions. They then examined how the forest structure and topography influenced high-burn severity patterns, whether winds affected the relationship between those factors, and how high burn severity was affected by land management practices associated with land ownership.

“90% of the burning occurred during high winds,” said Dr. Cody Every, a Research Associate in the Department of Environmental Science and Management at Portland State and the study’s lead author. “But we also found that vegetation structure and canopy height were significant in determining where the fire burned more severely.”

The research team found that areas with younger trees and low canopy height and cover were particularly susceptible to high mortality rates. As Holz pointed out, this finding is of particular consequence to lumber production in the state, where trees grown on plantations are typically younger, uniformly spaced and located near communities and critical infrastructure.

Given the composition of the temperate rainforests of the western slopes of the Cascade Mountains, where fuel proliferates, and the relationships between factors that contribute to megafires, the research team suggests that treatments such as prescribed fires and fuel reduction are not a practical approach to preventing future conflagrations. Instead, the team argues that we should focus on promoting resilient forests, increasing community preparedness, early suppression response, and hardening infrastructure.

The authors declare no conflict of interest. The funders had no role in the design of the study; in the collection, analyses, or interpretation of data; in the writing of the manuscript, or in the decision to publish the results.