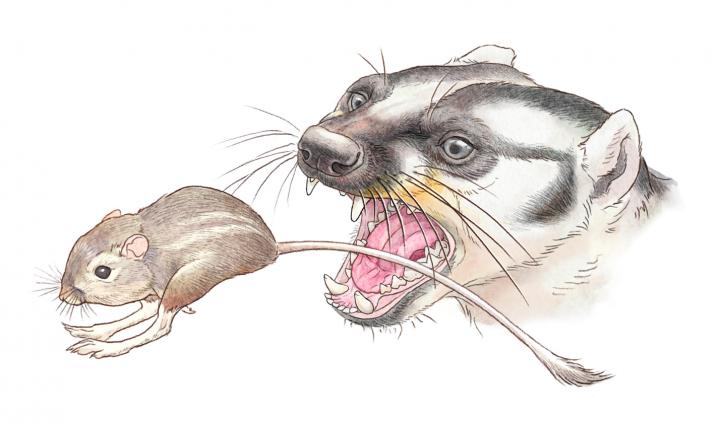 New research on an extinct weasel relative reveals what it might have eaten when it lived in North America and Asia about 20 million years ago. The oddly shaped skull of Leptarctus primus has long led to conflicting theories about its diet. But the new work, based on biomechanical modeling and published this week in the Journal of Vertebrate Paleontology, shows that Leptarctus was likely a carnivorous predator, with capability for omnivory and a broader diet when prey was scarce, and had a skull that functioned similarly to that of the living American badger.

Leptarctus primus, which lived in the Miocene and was just a little larger than a housecat, has intrigued researchers because of its unusual and extremely robust skull.

“For a mammal, its skull is really strange,” said co-author Z. Jack Tseng, a research associate at the American Museum of Natural History and an assistant professor of pathology and anatomical sciences at the Jacobs School of Medicine and Biomedical Science at the University at Buffalo. “It’s heavily built–like a tank–with very thick zygomatic cheek bones. The top of its head looks like it’s wearing a helmet.”

Strikingly, Leptarctus primus has two parallel ridges that line the top of the head (other carnivorans typically have a single central ridge or have smooth skulls). For many years, paleontologists have debated the ecological niche of Leptarctus based on conflicting interpretations of the strong parallel skull ridges, distinctive skull shape, and the shape of its teeth and chewing wear. Previous interpretations of their feeding lifestyle ranged widely, across virtually every type of known feeding behavior in carnivorans (dogs, cats, hyaenas, bears, seals, and weasels and their relatives), including herbivore, carnivore, insectivore, and omnivore. But because of the lack of quantitative research into how Leptarctus skulls functioned, the question of their diets remained unanswered.

In this study, led by Alixandra Prybyla, who was a student in the Museum’s National Science Foundation Summer Research Experience for Undergraduates program while at Columbia University, the researchers took an engineering approach. The team compared an almost complete fossil skull of Leptarctus primus with 18 species of modern carnivorans with known diets as well as to other fossil species, using bite simulations based on CT scans of the skulls and virtual modeling of feeding mechanics.

They found that among the other species analyzed, the skull of Leptarctus is mechanically most similar to the skull of the American badger. Despite some differences in their skull appearances, the computer simulations indicate that the badger is the best living biomechanical analog for understanding the dietary lifestyle of Leptarctus. Based upon those comparisons, the team determined that it was primarily a carnivore and an active predator, but that it could also have been an omnivore feeding on a wider range of plant and insect foods when necessary.

“It was probably hunting down prey and taking in whatever it had access to most of the time,” Tseng said.

Prybyla added: “This complete skull of Leptarctus represents an untapped wellspring of information on the history of ancient relatives of weasels, otters, badgers, and skunks. It’s wonderful what one specimen can illuminate for researchers. To spearhead a project of this magnitude as an undergraduate student was extremely empowering.”

The researchers will conduct future studies using similar engineering modeling tools to look at variations in skull feeding mechanics among other species in the leptarctine group, to determine how many different types of feeding adaptations may have existed among these unusual extinct predators.

The American Museum of Natural History, founded in 1869, is one of the world’s preeminent scientific, educational, and cultural institutions. The Museum encompasses 45 permanent exhibition halls, including those in the Rose Center for Earth and Space and the Hayden Planetarium, as well as galleries for temporary exhibitions. It is home to the Theodore Roosevelt Memorial, New York State’s official memorial to its 33rd governor and the nation’s 26th president, and a tribute to Roosevelt’s enduring legacy of conservation. The Museum’s five active research divisions and three cross-disciplinary centers support approximately 200 scientists, whose work draws on a world-class permanent collection of more than 34 million specimens and artifacts, as well as specialized collections for frozen tissue and genomic and astrophysical data, and one of the largest natural history libraries in the world. Through its Richard Gilder Graduate School, it is the only American museum authorized to grant the Ph.D. degree. Beginning in 2015, the Richard Gilder Graduate School also began granting the Master of Arts in Teaching (MAT) degree, the only such freestanding museum program. Annual visitation has grown to approximately 5 million, and the Museum’s exhibitions and Space Shows are seen by millions more in venues on six continents. The Museum’s website, mobile apps, and MOOCs (massive open online courses) extend its scientific research and collections, exhibitions, and educational programs to additional audiences around the globe. Visit amnh.org for more information.

Waterbug from european rivers found in the Iberian Peninsula