Exploring the source of stars and planets in a laboratory 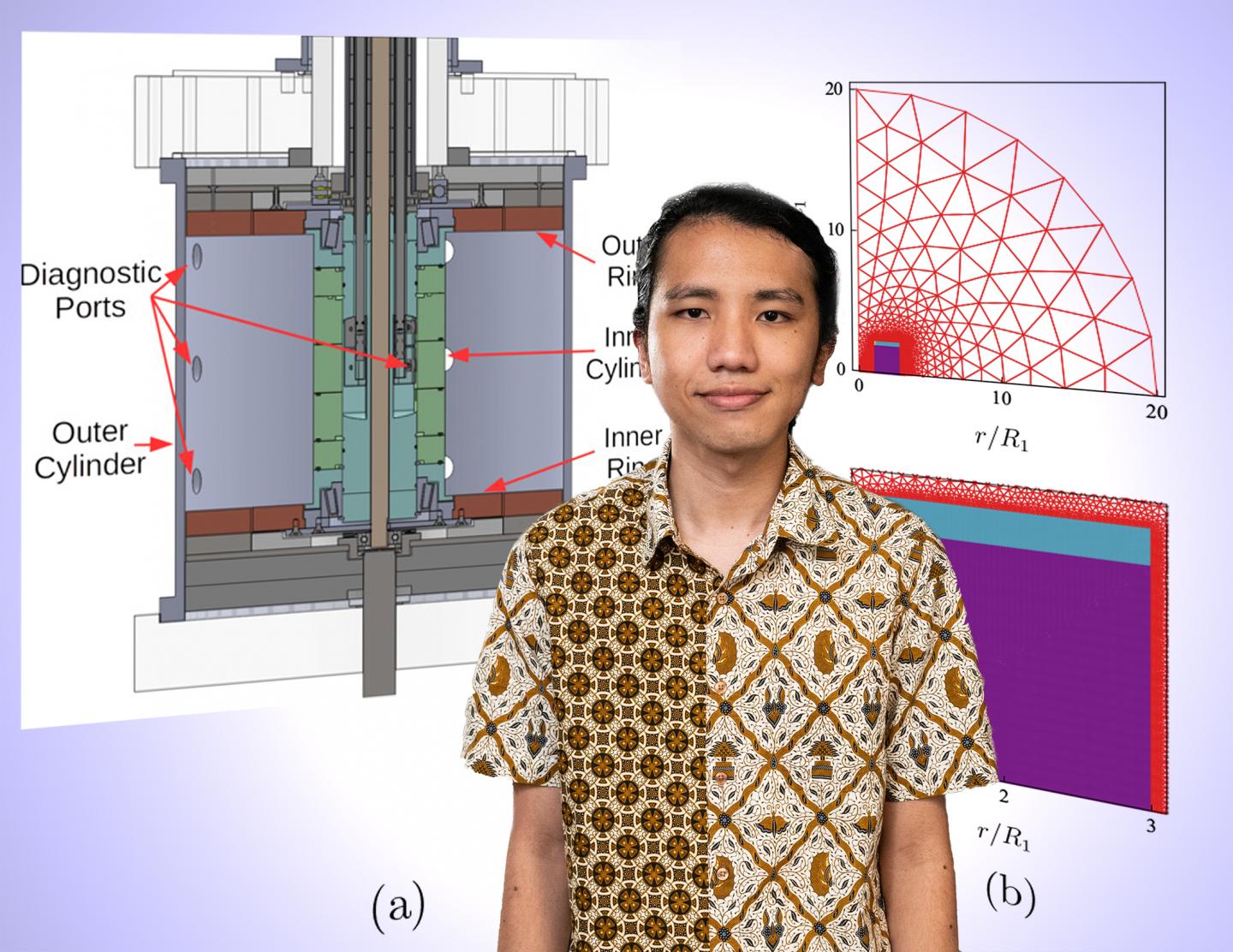 A new method for verifying a widely held but unproven theoretical explanation of the formation of stars and planets has been proposed by researchers at the U.S. Department of Energy’s (DOE) Princeton Plasma Physics Laboratory (PPPL). The method grows from simulation of the Princeton Magnetorotational Instability (MRI) Experiment, a unique laboratory device that aims to demonstrate the MRI process that is believed to have filled the cosmos with celestial bodies.

The novel device, designed to duplicate the process that causes swirling clouds of cosmic dust and plasma to collapse into stars and planets, consists of two fluid-filled concentric cylinders that rotate at different speeds. The device seeks to replicate the instabilities that are thought to cause the swirling clouds to gradually shed what is called their angular momentum and collapse into the growing bodies that they orbit. Such momentum keeps the Earth and other planets firmly within their orbits.

The suggested system would measure the strength of the radial, or circular, magnetic field that the rotating inner cylinder generates in experiments. Since the strength of the field correlates strongly with expected turbulent instabilities, the measurements could help pinpoint the source of the turbulence.

“Our overall objective is to show the world that we’ve unambiguously seen the MRI effect in the lab,” said physicist Erik Gilson, one of Himawan’s mentors on the project and a coauthor of the paper. “What Himawan is proposing is a new way to look at our measurements to get at the essence of MRI.”

The simulations have shown some surprising results. While MRI is normally observable only at a sufficiently high rate of cylinder rotation, the new findings indicate that instabilities can likely be seen well before the upper limit of the experimental rotation rate is reached. “That means speeds much closer to the rates we are running now,” Winarto said, “and projects to the rotational speed that we should aim for to see MRI.”

A key challenge to spotting the source of MRI is the existence of other effects that can act like MRI but are not in fact the process. Prominent among these deceptive effects are what are called Rayleigh instabilities that break up fluids into smaller packets, and Ekman circulation that alters the profile of fluid flow. The new simulations clearly indicate “that MRI, rather than Ekman circulation or Rayleigh instability, dominates the fluid behavior in the region where MRI is expected,” Winarto said.

The findings thus shed new light on the growth of stars and planets that populate the universe. “Simulations are very useful to point you in the right direction to help interpret some of the diagnostic results of experiments,” Gilson said. “What we see from these results is that the signals for MRI look like they should be able to be seen more easily in experiments than we had previously thought.”

Funding for this work comes from the U.S. Department of Energy Office of Science; NASA; and the Max- Planck-Princeton Center for Plasma Physics. Collaborators include PPPL physicists Fatima Ebrahimi and Yin Wang; Hantao Ji, a PPPL physicist and professor of astrophysical sciences at Princeton University; and Jeremy Goodman, professor of astrophysical sciences at Princeton University. Jean-Luc Guermond of Texas A&M University provided the SFEMaNS simulation code used extensively in the paper.