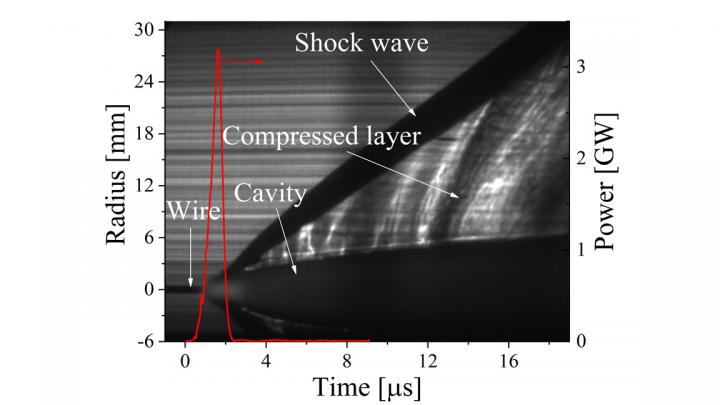 WASHINGTON, D.C., May 2, 2019 — If you’re not a plasma physicist, exploding electrical wires underwater may sound like a bad idea. But it’s actually a way to study shock waves, the propagating disturbances that move faster than the speed of sound.

Shock wave studies allow researchers to achieve the warm dense matter that’s found only in the extreme conditions around stars and created in the laboratory for inertial confinement fusion research. Shock waves also have medicinal, industrial and military applications. Exploding an electrical wire underwater is one way to generate a shock wave and give scientists a tool to verify the equations used to predict shock waves.

Researchers from the Technion Israel Institute of Technology set out to understand the relation, if any, between the evolution of a shock wave and the expansion of the exploding wire in a recent paper in the journal Physics of Plasmas, from AIP Publishing. Taking shadow streak images to see the trajectory of the shock waves, they found that the wire’s expansion determines how a shock wave decays, and developed a simplified model to describe this relationship.

The researchers observed that long after the shock wave is generated, the wire continues to expand, which leads to a significantly slower shock wave than predicted by previous models. Further unlike previous models, this new model does not assume self-similar motion and instantaneous energy release.

“Surprisingly, and this is the exciting part, the results of this simplified model fit excellently the experimentally obtained results,” said Alexander Rososhek, an author of the paper. The experiment showed that the exploding wire that generates the shock wave expands with subsonic velocity.

More specifically, these results apply to different experimental setups to study shock waves. For example, the results of this research can be used in experiments where shock intensity is amplified by a water flow acquiring additional energy by combustion of the exploded wires.

In future research, Rososhek and the other paper authors will attempt to increase shock wave intensity by altering properties of the exploding wire, which could provide a supplementary energy deposition. They would also like to employ a high-intensity picosecond-timescale X-ray beam to study the initial phase of shock generation through joint work led by Simon Bland’s group from the Imperial College of London with the European Synchrotron Radiation Facility.

The article, “Evolution of a shock wave generated by underwater electrical explosion of a single wire,” is authored by Alexander Rososhek, Sergey Efimov, Victor Gurovich, Alexander Virozub, Somesh V. Tewari and Yakov E. Krasik. The article appeared in the journal Physics of Plasmas on April 16, 2019 (DOI: 10.1063/1.5092321). It can be accessed at https://aip.scitation.org/doi/full/10.1063/1.5092321.

Physics of Plasmas is devoted to the publication of original experimental and theoretical work in plasma physics, from basic plasma phenomena to astrophysical and dusty plasmas. See http://pop.aip.org.

What is pepper spray? (video)

No clear path for golden rice to reach consumers

Misjudging the strength of other people’s emotions based on…

Smelling your lover’s shirt could improve your sleep