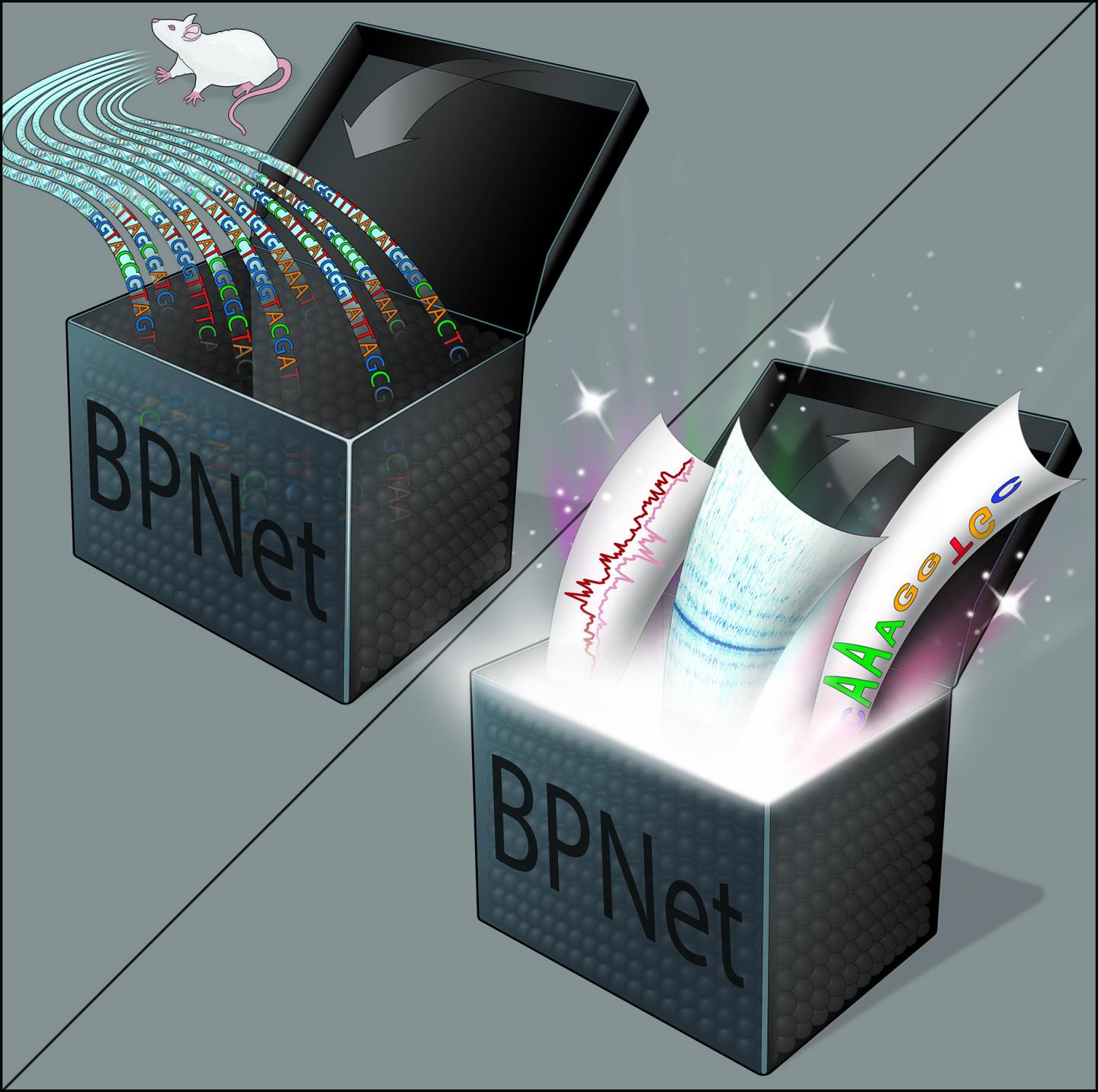 KANSAS CITY, MO–Researchers at the Stowers Institute for Medical Research, in collaboration with colleagues at Stanford University and Technical University of Munich have developed advanced explainable artificial intelligence (AI) in a technical tour de force to decipher regulatory instructions encoded in DNA. In a report published online February 18, 2021, in Nature Genetics, the team found that a neural network trained on high-resolution maps of protein-DNA interactions can uncover subtle DNA sequence patterns throughout the genome and provide a deeper understanding of how these sequences are organized to regulate genes.

Neural networks are powerful AI models that can learn complex patterns from diverse types of data such as images, speech signals, or text to predict associated properties with impressive high accuracy. However, many see these models as uninterpretable since the learned predictive patterns are hard to extract from the model. This black-box nature has hindered the wide application of neural networks to biology, where interpretation of predictive patterns is paramount.

One of the big unsolved problems in biology is the genome’s second code–its regulatory code. DNA bases (commonly represented by letters A, C, G, and T) encode not only the instructions for how to build proteins, but also when and where to make these proteins in an organism. The regulatory code is read by proteins called transcription factors that bind to short stretches of DNA called motifs. However, how particular combinations and arrangements of motifs specify regulatory activity is an extremely complex problem that has been hard to pin down.

Now, an interdisciplinary team of biologists and computational researchers led by Stowers Investigator Julia Zeitlinger, PhD, and Anshul Kundaje, PhD, from Stanford University, have designed a neural network–named BPNet for Base Pair Network–that can be interpreted to reveal regulatory code by predicting transcription factor binding from DNA sequences with unprecedented accuracy. The key was to perform transcription factor-DNA binding experiments and computational modeling at the highest possible resolution, down to the level of individual DNA bases. This increased resolution allowed them to develop new interpretation tools to extract the key elemental sequence patterns such as transcription factor binding motifs and the combinatorial rules by which motifs function together as a regulatory code.

“This was extremely satisfying,” says Zeitlinger, “as the results fit beautifully with existing experimental results, and also revealed novel insights that surprised us.”

For example, the neural network models enabled the researchers to discover a striking rule that governs binding of the well-studied transcription factor called Nanog. They found that Nanog binds cooperatively to DNA when multiples of its motif are present in a periodic fashion such that they appear on the same side of the spiraling DNA helix.

“There has been a long trail of experimental evidence that such motif periodicity sometimes exists in the regulatory code,” Zeitlinger says. “However, the exact circumstances were elusive, and Nanog had not been a suspect. Discovering that Nanog has such a pattern, and seeing additional details of its interactions, was surprising because we did not specifically search for this pattern.”

“This is the key advantage of using neural networks for this task,” says ?iga Avsec, PhD, first author of the paper. Avsec and Kundaje created the first version of the model when Avsec visited Stanford during his doctoral studies in the lab of Julien Gagneur, PhD, at the Technical University in Munich, Germany.

BPNet’s network architecture is similar to that of neural networks used for facial recognition in images. For instance, the neural network first detects edges in the pixels, then learns how edges form facial elements like the eye, nose, or mouth, and finally detects how facial elements together form a face. Instead of learning from pixels, BPNet learns from the raw DNA sequence and learns to detect sequence motifs and eventually the higher-order rules by which the elements predict the base-resolution binding data.

Once the model is trained to be highly accurate, the learned patterns are extracted with interpretation tools. The output signal is traced back to the input sequences to reveal sequence motifs. The final step is to use the model as an oracle and systematically query it with specific DNA sequence designs, similar to what one would do to test hypotheses experimentally, to reveal the rules by which sequence motifs function in a combinatorial manner.

“The beauty is that the model can predict way more sequence designs that we could test experimentally,” Zeitlinger says. “Furthermore, by predicting the outcome of experimental perturbations, we can identify the experiments that are most informative to validate the model.” Indeed, with the help of CRISPR gene editing techniques, the researchers confirmed experimentally that the model’s predictions were highly accurate.

Since the approach is flexible and applicable to a variety of different data types and cell types, it promises to lead to a rapidly growing understanding of the regulatory code and how genetic variation impacts gene regulation. Both the Zeitlinger Lab and the Kundaje Lab are already using BPNet to reliably identify binding motifs for other cell types, relate motifs to biophysical parameters, and learn other structural features in the genome such as those associated with DNA packaging. To enable other scientists to use BPNet and adapt it for their own needs, the researchers have made the entire software framework available with documentation and tutorials.

This work was supported in part by the Stowers Institute for Medical Research and the National Human Genome Research Institute (awards R01HG009674 and U01HG009431 to A.K. and R01HG010211 to J.Z.) and National Institute of General Medical Sciences (DP2GM123485 to A.K.) of the National Institutes of Health (NIH). Additional support included the German Bundesministerium für Bildung und Forschung (project MechML 01IS18053F to Z.A.) and a Stanford BioX Fellowship and Howard Hughes Medical Institute International Student Research Fellowship (to A.S). Sequencing was performed at the Stowers Institute for Medical Research and University of Kansas Medical Center Genomics Core supported by the NIH awards from the National Institute of Child Health and Human Development (U54HD090216), Office of the Director (Instrumentation S10OD021743), and National Institute of General Medical Sciences (COBRE P30GM122731). The content is solely the responsibility of the authors and does not necessarily represent the official views of the NIH.

DNA is well known for encoding proteins. It also contains another code–a regulatory code–that directs when and where to make proteins in an organism. In a report published online February 18, 2021, in Nature Genetics, researchers from the lab of Julia Zeitlinger, PhD, an Investigator at the Stowers Institute for Medical Research, and collaborators from Stanford University and Technical University of Munich describe how they have used explainable artificial intelligence to help decipher the genome’s regulatory code.

The researchers developed a neural network whose innerworkings can be uncovered to reveal regulatory DNA sequence patterns and their higher-level organizing principles from high-resolution genomics data. The Zeitlinger Lab anticipates that the predictive models, rules, and maps generated using this type of approach will lead to a better understanding of natural and disease-associated genetic variation in regulatory regions of DNA.

About the Stowers Institute for Medical Research

Founded in 1994 through the generosity of Jim Stowers, founder of American Century Investments, and his wife, Virginia, the Stowers Institute for Medical Research is a non-profit, biomedical research organization with a focus on foundational research. Its mission is to expand our understanding of the secrets of life and improve life’s quality through innovative approaches to the causes, treatment, and prevention of diseases.

The Institute consists of twenty independent research programs. Of the approximately 500 members, over 370 are scientific staff that includes principal investigators, technology center directors, postdoctoral scientists, graduate students, and technical support staff. Learn more about the Institute at http://www.stowers.org and about its graduate program at http://www.stowers.org/gradschool.