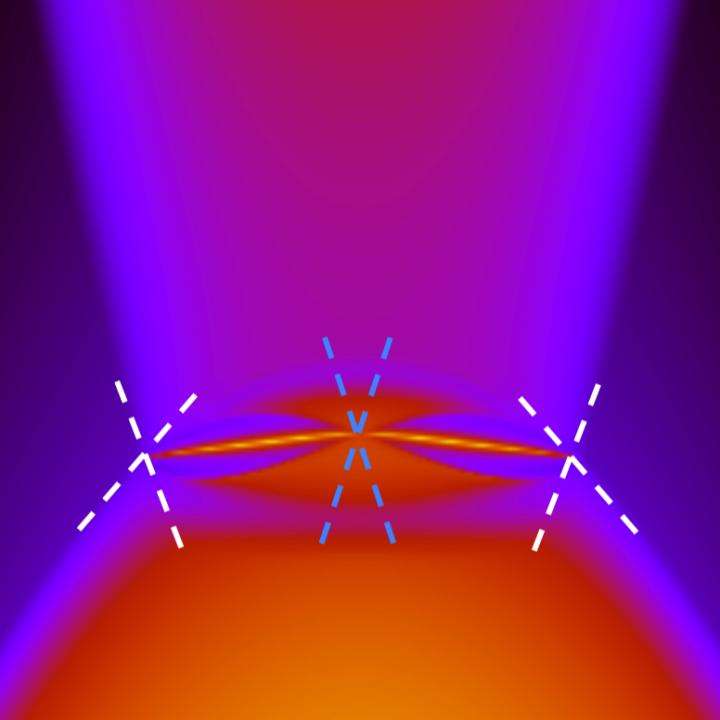 An important line of inquiry in this field involves topology–a mathematical framework for describing surface states that remain stable even when the material is deformed by stretching or twisting. The inherent stability of topological surface states has implications for a range of applications in electronics and spintronics.

Now, an international team of scientists has discovered an exotic new form of topological state in a large class of 3D semi-metallic crystals called Dirac semimetals. The researchers developed extensive mathematical machinery to bridge the gap between theoretical models with forms of “higher-order” topology (topology that manifests only at the boundary of a boundary) and the physical behavior of electrons in real materials.

Over the past decade, Dirac and Weyl fermions have been predicted and experimentally confirmed in a number of solid-state materials, most notably in crystalline tantalum arsenide (TaAs), the first-discovered topological Weyl fermion semimetal. Several researchers observed that TaAs exhibits 2D topological surface states known as “Fermi arcs.” But similar phenomena observed in Dirac fermion semimetals have eluded understanding, until now.

What is a Fermi arc? In the context of semimetals, it’s a surface state behaving like one-half of a two-dimensional metal; the other half is found on a different surface.

Bradlyn notes, “This is not something that’s possible in a purely 2D system, and can only happen as a function of the topological nature of a crystal. In this work, we found that the Fermi arcs are confined to the 1D hinges in Dirac semimetals.” In earlier work, Dai, Bernevig, and colleagues experimentally demonstrated that the 2D surfaces of Weyl semimetals must host Fermi arcs, regardless of the details of the surface, as a topological consequence of the Weyl points (fermions) present deep within the bulk of the crystal. This was first theoretically predicted by Vishwanath, et al.

“Weyl semimetals have layers like onions,” notes Dai. “It’s remarkable that you can keep peeling the surface of TaAs, but the arcs are always there.”

“In addition to settling the decades-old problem of whether condensed matter Dirac fermions have topological surface states,” Wieder notes, “we demonstrated that Dirac semimetals represent one of the first-solid state materials hosting signatures of topological quadrupoles.”

Bradlyn describes the team’s methodology: “We took a three pronged approach to sort things out. First, we constructed some toy models for systems that we expected to have these properties, inspired by previous work on higher-order topological systems in 2D, and using group theory to enforce constraints in three dimensions. This was done primarily by Dr. Wieder, Prof. Cano, and myself.

“Second, Dr. Wieder and I carried out a more abstract theoretical analysis of systems in two dimensions, deriving the conditions for which they are required to exhibit hinge states, even outside of toy models.”

“Third, we performed an analysis of known materials, combining Professor Leslie Schoop’s chemistry intuition, our symmetry constraints, and ab initio calculations from Professor Zhijun Wang to show that our hinge arc states should be visible in real materials.”

When the dust settled, the team found that almost all condensed matter Dirac semimetals should in fact exhibit hinge states.

“Our work provides a physically observable signature of the topological nature of Dirac fermions, which was previously ambiguous,” notes Cano.

Bradlyn adds, “It’s clear that numerous previously studied Dirac semimetals actually do have topological boundary states, if one looks in the right place.”

Through first-principles calculations, the researchers theoretically demonstrated the existence of overlooked hinge states on the edges of known Dirac semimetals, including the prototypical material, cadmium arsenide (Cd3As2).

Bernevig comments, “With an amazing team combining skills from theoretical physics, first-principles calculations, and chemistry, we were able to demonstrate the connection between higher-order topology in two dimensions and Dirac semimetals in three dimensions, for the first time.”

The team’s findings have implications for the development of new technologies, including in spintronics, because the hinge states can be converted into edge states whose direction of propagation is tied to their spin, much like the edge states of a 2D topological insulator. Additionally, nanorods of higher-order topological semimetals could realize topological superconductivity on their surfaces when proximitized with conventional superconductors, potentially realizing multiple Majorana fermions, which have been proposed as ingredients for achieving fault-tolerant quantum computation.