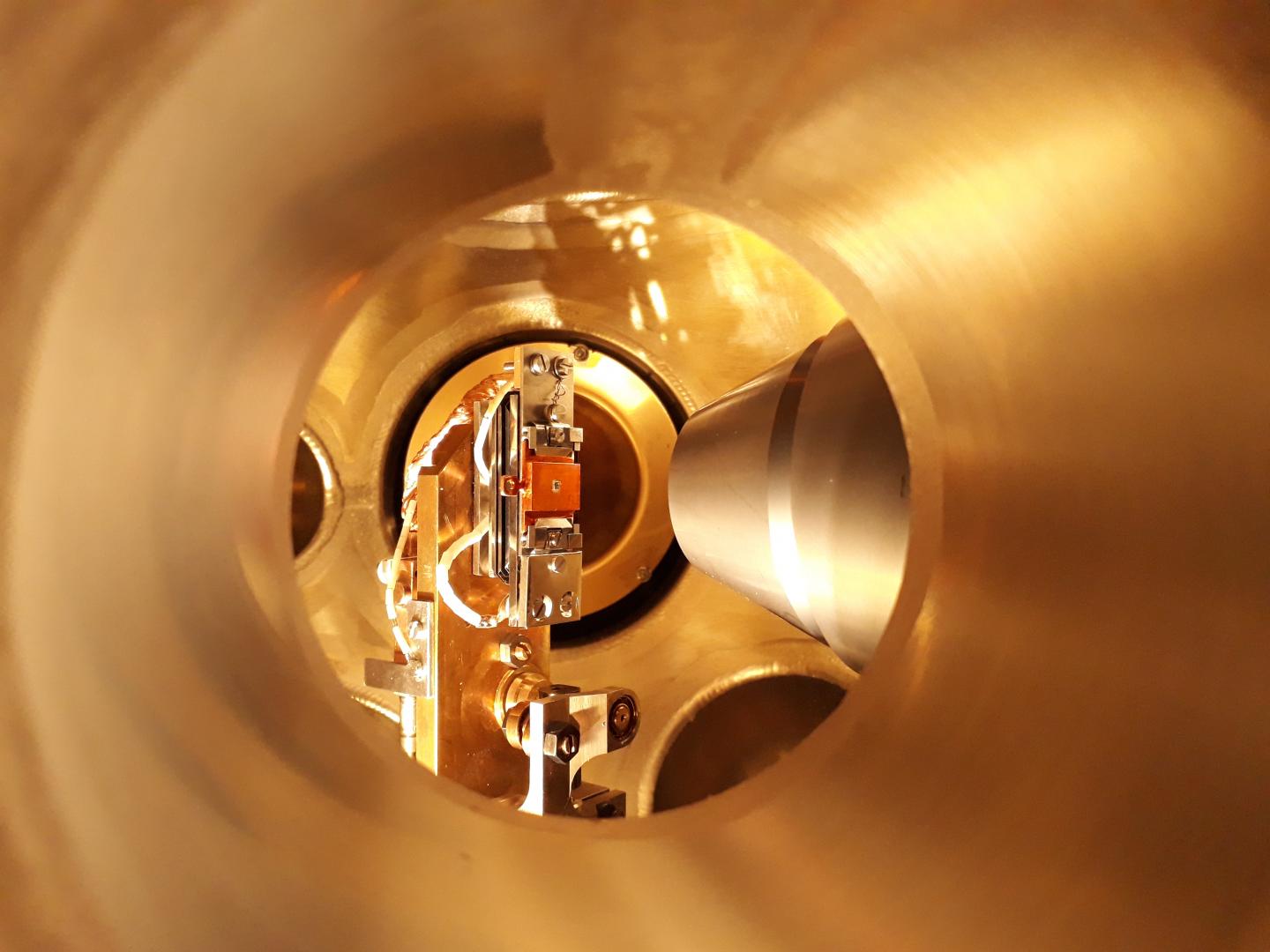 In physics, they are currently the subject of intensive research; in electronics, they could enable completely new functions. So-called topological materials are characterised by special electronic properties, which are also very robust against external perturbations. This material group also includes tungsten ditelluride. In this material, such a topologically protected state can be “broken up” using special laser pulses within a few trillionths of a second (“picoseconds”) and thus change its properties. This could be a key requirement for realising extremely fast, optoelectronic switches. For the first time physicists at Kiel University (CAU), in cooperation with researchers at the Max Planck Institute for Chemical Physics of Solids (MPI-CPfS) in Dresden, Tsinghua University in Beijing and Shanghai Tech University, have been able to observe changes to the electronic properties of this material in experiments in real-time. Using laser pulses, they put the atoms in a sample of tungsten ditelluride into a state of controlled excitation, and were able to follow the resulting changes in the electronic properties “live” with high-precision measurements. They published their results recently in the scientific journal Nature Communications.

“If these laser-induced changes can be reversed again, we essentially have a switch that can be activated optically, and which can change between different electronic states,” explained Michael Bauer, professor of solid state physics at the CAU. Such a switching process has already been predicted by another study, in which researchers from the USA were recently able to directly observe the atomic movements in tungsten ditelluride. In their study, the physicists from the Institute of Experimental and Applied Physics at the CAU now focused on the behaviour of the electrons, and how the electronic properties in the same material can be altered using laser pulses.

“Some of the electrons in tungsten ditelluride are highly mobile, so they are excellent information carriers for electronic applications. This is due to the fact that they behave like so-called Weyl fermions,” said doctoral researcher Petra Hein to explain the unusual properties of the material, also known as a Weyl semimetal. Weyl fermions are massless particles with special properties and have previously only been observed indirectly as “quasi-particles” in solids like tungsten ditelluride. “For the first time, we were now able to make the changes in the areas of the electronic structure visible, in which these Weyl properties are exhibited.”

Excitations of the material changes its electronic properties

To capture the barely-visible changes in the electronic properties a highly-sensitive experimental design, extremely precise measurements and an extensive analysis of the data obtained were required. During the past years the Kiel research team was able to develop such an experiment with the necessary long-term stability. With the generated laser pulses they put the atoms inside a sample of tungsten ditelluride into a state of vibrational excitation. Different overlapping vibrational excitations arose, which in turn changed the electronic properties of the material. “One of these atomic vibrations was known to change the electronic Weyl properties. We wanted to find out exactly what this change looks like,” said Hein to describe one of the key goals of the study.

In order to observe this specific process, the research team irradiated the material with a second laser pulse after a few picoseconds. This released electrons from the sample, which allowed drawing conclusions about the electronic structure of the material – the method is known as “time-resolved photoelectron spectroscopy”. “Due to the short exposure time of only 0.1 picoseconds, we get a snapshot of the electronic state of the material. We can combine many of these individual images into a film and thereby observe how the material reacts to the excitation by the first laser pulse,” said Dr Stephan Jauernik to explain the measurement method.

Recording a single data set on the extremely short modification process typically took one week. The Kiel research team evaluated a large number of such data sets using a newly developed analytical approach and was thus able to visualize the changes in the electronic Weyl properties of tungsten ditelluride.

“Our results demonstrate the sensitive and highly-selective interplay between the vibrations of the atoms of the solid and the unusual electronic properties of tungsten ditelluride,” summarised Bauer. Follow-up research aims at investigating whether such electronic switching processes can be triggered even faster – directly by the irradiating laser pulse – as has already been theoretically predicted for other topological materials.

Caption: Topological materials such as tungsten ditelluride, here a sample in an ultra-high vacuum chamber, have special electronic properties and are very robust against external perturbations.

Caption: In order to record barely visible changes in the electronic properties of tungsten ditelluride, a highly sensitive experimental setup is required, which the research team from Kiel has developed over the past few years.

Caption: Physics doctoral student Petra Hein and Dr. Stephan Jauernik used ultra-short laser pulses to take a series of snapshots that show how the properties change in the material.

Institute of Experimental and Applied Physics

Details, which are only a millionth of a millimetre in size: this is what the priority research area “Kiel Nano, Surface and Interface Science – KiNSIS” at Kiel University has been working on. In the nano-cosmos, different laws prevail than in the macroscopic world – those of quantum physics. Through intensive, interdisciplinary cooperation between physics, chemistry, engineering and life sciences, the priority research area aims to understand the systems in this dimension and to implement the findings in an application-oriented manner. Molecular machines, innovative sensors, bionic materials, quantum computers, advanced therapies and much more could be the result. More information at http://www.kinsis.uni-kiel.de