Imagine if the real cost to society of the food you buy at the grocery store was built right into each product’s price. Everything with added sugar would cost a whole lot more, according to University of Alberta researchers in a new study in The Canadian Journal of Public Health. 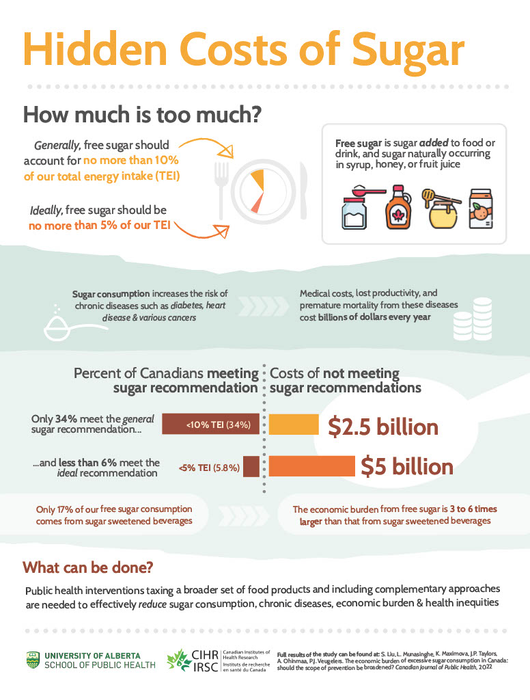 Imagine if the real cost to society of the food you buy at the grocery store was built right into each product’s price. Everything with added sugar would cost a whole lot more, according to University of Alberta researchers in a new study in The Canadian Journal of Public Health.

They peg the economic burden of excessive sugar consumption in Canada at $5 billion a year, thanks to the direct and indirect costs related to 16 chronic diseases. The researchers call on governments to use taxation, subsidies, education and other measures to encourage healthier eating habits, saying it is “an area of urgent need for action” in the post-COVID-19 pandemic era.

“This pandemic has brought us more unhealthy lifestyles — on the nutrition side, on the physical activity side and on screen time for kids. If we do not act now, we should expect more chronic diseases such as Type 2 diabetes in the years ahead,” said principal investigator Paul Veugelers, professor in the U of A’s School of Public Health.

“Health care costs for chronic diseases are ballooning,” Veugelers said. “We not only need to make our health-care system more efficient, we should also act on the demand side by investing in primary prevention to ensure we have fewer patients with chronic diseases. Addressing sugar consumption is one strategy to achieve that.”

Both Canada’s Food Guide and the World Health Organization recommend we consume less than 10 per cent of our daily energy intake as “free sugar” from foods made with added sugar and naturally sweet juices, honey and syrup. For additional health benefits, less than five per cent is recommended.

Using data reported in the 2015 Canadian Community Health Survey on nutrition, the researchers found that two out of three Canadians eat more sugar than recommended. They then established risk estimates for 16 diet-related chronic conditions, including diabetes, cardiovascular diseases, cancer, kidney disease and low back pain. They calculated avoidable direct health-care costs such as doctors, hospitals and drugs, along with indirect costs like productivity losses due to illness and disability.

Treatment and management of chronic diseases accounts for 67 per cent of all health-care costs in Canada, they reported, with an annual price tag of up to $190 billion.

“Diabetes is just a very expensive condition to manage and to treat. It can occur at an early age, and you can live with it for a long, long time. Kidney issues, dialysis, amputation, those are just a few gruesome examples of where that disease trajectory can go,” said Veugelers. “Patients require lots of health-care interactions that drive the costs of chronic diseases.”

Forty countries and cities around the world have already introduced a special tax on sugar-sweetened beverages such as pop as a disincentive to consumption, building on lessons from tobacco control measures. Newfoundland and Labrador recently introduced Canada’s first such tax and similar policies have been suggested elsewhere, but in this study the researchers push for a broader approach, because they found that only 17 per cent of the costs related to sugar consumption could be traced back to sugary drinks.

Instead, they advocate for higher taxes on all sugar-added products, and to put the tax revenues towards subsidies for healthful foods, education programs, limits on advertising to children, and better product labeling.

The economic burden of excessive sugar consumption in Canada: should the scope of preventive action be broadened?