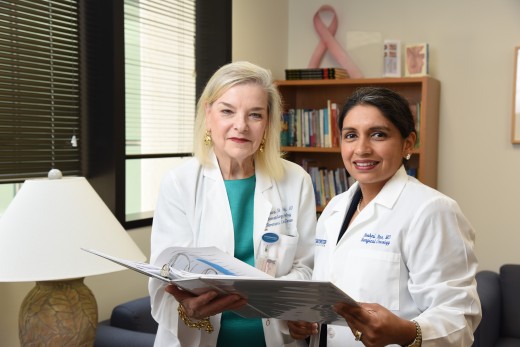 UT Southwestern Medical Center cancer researchers studying mitochondrial DNA (mtDNA) in a group of triple negative breast cancer patients found that 13 percent of participants were unaware of ancestry that could influence their risk of cancer.

“Some patients who self-identified as Hispanic had African-American ancestry. One Hispanic woman was found to be Ashkenazi Jewish. Both African Americans and some Ashkenazi Jewish populations have a higher risk for triple negative breast cancer,” said Dr. Rao, Associate Professor of Surgery and with the Harold C. Simmons Comprehensive Cancer Center.

“This study is the first to perform mtDNA testing for self-described African-Americans, Caucasians and Hispanics with triple negative breast cancer and to identify unexpected mtDNA patterns,” said senior author Dr. Barbara Haley, Professor of Internal Medicine, who holds the Charles Cameron Sprague, M.D. Chair in Clinical Oncology. “It is estimated that 10 to 30 percent of Americans may not be aware of their mixed ancestry. This type of assessment has the potential to be informative for other cancers where we see ethnic differences in frequency without understanding the cause.”

Patients diagnosed with triple negative breast cancer tend to be younger and are more likely to be African-American or Hispanic. These patients may be less likely to be identified through traditional mammography screenings, which tend to target women 50 and older.

“If you know your ancestry, then you could be included in the group that gets screened at a younger age,” Dr. Rao said.

The researchers asked each volunteer – 31 African-Americans, 31 Caucasians, and 30 Hispanics who are triple negative breast cancer patients – to come in for a simple test, which collects cells from inside the cheek on a swab. Mitochondrial DNA was then isolated from these samples for comparison. Mitochondrial DNA differs from nuclear DNA because it is maternally inherited so it does not change or mix. Researchers can trace the lineage of mtDNA through multiple generations.

Among 30 Hispanic patients in this study, 22 did not have a family history of breast cancer whereas eight did. These results suggest that further genetic testing can potentially become an important step in identifying those at risk.

The study, which appears in the journal Cancer, was supported by Young Texans Against Cancer and the David M. Crowley Foundation.

How do you forecast eruptions at volcanoes that sit ‘on the…