Strategies for growing biomass for fuel can have economic, ecological and environmental benefits 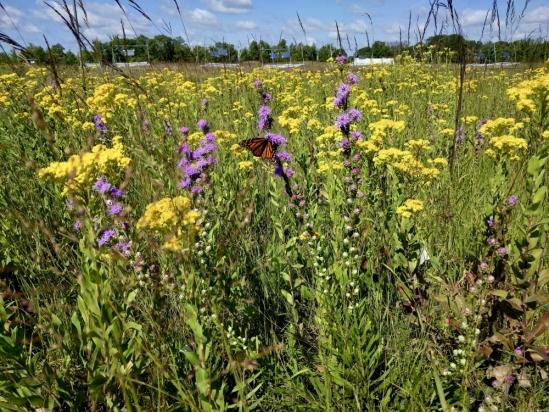 In efforts to curb our use of greenhouse gas-generating fossil fuels, plant-based biofuels are among the top contenders as alternative liquid energy sources for transportation. However, strategies to produce high yields of biomass for fuels are not a one-size-fits-all proposition, according to a study led by UC Santa Barbara professor of ecology David Tilman.

“It is difficult to make a biofuel that actually has environmental benefits,” said Tilman, a faculty member in the Bren School of Environmental Science & Management, and co-author of a paper published in the journal Nature Sustainability. “When a food crop is used to make a biofuel, this, in essence, takes food away from poor people around the world, and, it turns out, offers little, if any, greenhouse gas reductions.”

Whereas conventional production of biofuels has largely used food crops such as corn, soybeans, oil palm and sugarcane, these practices have their pitfalls, such as intensive use of nitrogen fertilizers, and competition for fertile croplands that had been growing food. In Tilman’s 10-year experiment, the researchers explored alternative ways to generate biomass, but with fewer environmental and economic side effects.

“We wanted to see if prairie grasses might prove to be a better crop,” he said. In contrast to relatively shallower-rooted annual crops, the deep roots of the perennial grasses of the Midwest are better able to store carbon in the earth — an additional environmental benefit. Moreover, according to the study, growing a diversity of perennial grasses on lands so infertile that they had been abandoned from agriculture “could minimize competition with food and the greenhouse gas emissions associated with potential direct or indirect land clearing, enhance recovery of ecosystem services and provide wildlife habitat.”

However, because the land was depleted of nutrients, some agricultural treatment might have value. And so the researchers, working with 36 plots and 32 native grassland species, set out to find the optimal amount of fertilizer and irrigation that would yield the greatest — and most diverse — amounts of biomass, while also resulting in underground carbon storage and minimal nitrate leaching.

The result, after a decade of observation and analysis? More is not necessarily better.

“Our results indicate that different intensification levels have different environmental benefits and costs,” said lead author Yi Yang, who is now a postdoctoral researcher at the University of Minnesota.

While the results indicated that the energy yield from optimal management of prairie grasses was still somewhat lower per hectare than for traditional corn ethanol, the prairie grasses were grown on land too infertile for corn. Moreover, because much less nitrogen fertilizer was used than for corn and especially because of the high rate of carbon storage in soils, the bioenergy from the optimally grown prairie grasses gave much greater greenhouse savings. All this, with the benefits of ecological restoration.

The promising results of this study lead to the notion that a more tailored, ecologically friendly approach to biofuel production could be beneficial in other regions as well, as we continue to explore ways to generate biomass for alternatives to fossil fuels.

Research on this project was conducted also by Clarence Lehman and Jared L. Trost of University of Minnesota (UMN). Photo by George Furey, now a Ph.D. student at UMN, Department of Ecology, Evolution and Behavior.

Walking for health benefits just got easier to track