Even dying stars can still give birth to planets

Planets are usually not much older than the stars around which they revolve. Take the Sun: it was born 4.6 billion years ago, and not long after that, Earth came into the world. But KU Leuven astronomers have discovered that a completely different scenario is also possible. Even if they are near death, some types of stars can possibly still form planets. If this is confirmed, theories on planet formation will need to be adjusted. 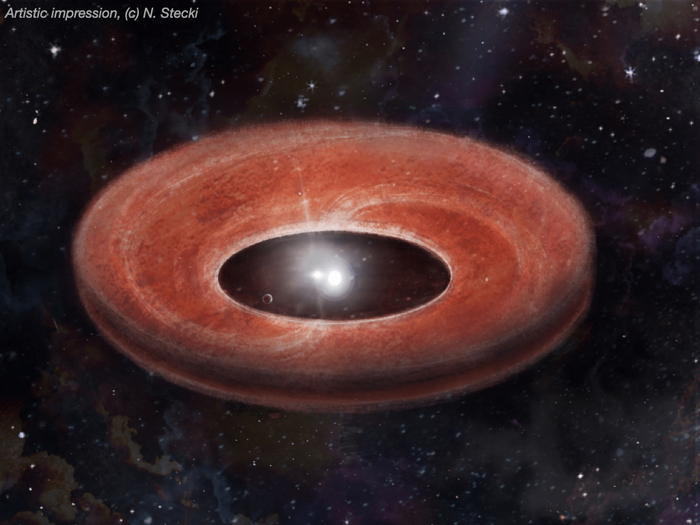 Planets are usually not much older than the stars around which they revolve. Take the Sun: it was born 4.6 billion years ago, and not long after that, Earth came into the world. But KU Leuven astronomers have discovered that a completely different scenario is also possible. Even if they are near death, some types of stars can possibly still form planets. If this is confirmed, theories on planet formation will need to be adjusted.

Planets such as Earth, and all other planets in our solar system, were formed not long after the Sun. Our Sun started to burn 4.6 billion years ago, and in the next million years, the matter around it clumped into protoplanets. The birth of the planets in that protoplanetary disc, a gigantic pancake made of dust and gas, so to speak, with the Sun in the middle, explains why they all orbit in the same plane.

But such discs of dust and gas needn’t necessarily only surround newborn stars. They can also develop independently from star formation, for example around binary stars of which one is dying (binary stars are two stars that orbit each other, also called a binary system). When the end approaches for a medium-sized star (like the Sun), it catapults the outer part of its atmosphere into space, after which it slowly dies out as a so-called white dwarf. However, in the case of binary stars, the gravitational pull of the second star causes the matter ejected by the dying star to form a flat, rotating disc. Moreover, this disc strongly resembles the protoplanetary discs that astronomers observe around young stars elsewhere in the Milky Way.

This we already knew. However, what is new is that the discs surrounding so-called evolved binary stars not uncommonly show signs that could point to planet formation, as discovered by an international team of astronomers led by KU Leuven researchers. What’s more, their observations show that this is the case for one in ten of these binary stars. “In ten per cent of the evolved binary stars with discs we studied, we see a large cavity (a void/opening, ed.) in the disc”, says KU Leuven astronomer Jacques Kluska, first author of the article in the journal Astronomy & Astrophysics in which the discovery is described. “This is an indication that something is floating around there that has collected all matter in the area of the cavity.”

The clean-up of the matter could be the work of a planet. That planet might not have formed at the very beginning of one of the binary stars’ life, but at the very end. The astronomers moreover found further strong indications for the presence of such planets. “In the evolved binary stars with a large cavity in the disc, we saw that heavy elements such as iron were very scarce on the surface of the dying star”, says Kluska. “This observation leads one to suspect that dust particles rich in these elements were trapped by a planet.” By the way, the Leuven astronomer doesn’t rule out the possibility that in this way, several planets can be formed around these binary stars.

The discovery was made when the astronomers were drawing up an inventory of evolved binary stars in our Milky Way. They did that based on existing, publicly available observations. Kluska and his colleagues counted 85 of such binary star pairs. In ten pairs, the researchers came across a disc with a large cavity on the infrared images.

Current theories put to the test

If new observations confirm the existence of planets around evolved binary stars, and if it turns out the planets were only formed after one of the stars had reached the end of its life, the theories on planet formation will need to be adjusted. “The confirmation or refutation of this extraordinary way of planet formation will be an unprecedented test for the current theories”, according to Professor Hans Van Winckel, head of the KU Leuven Institute of Astronomy.

The KU Leuven astronomers soon want to verify their hypothesis themselves. To this end, they will use the big telescopes of the European Southern Observatory in Chile to take a closer look at the ten pairs of binary stars whose discs show a large cavity.