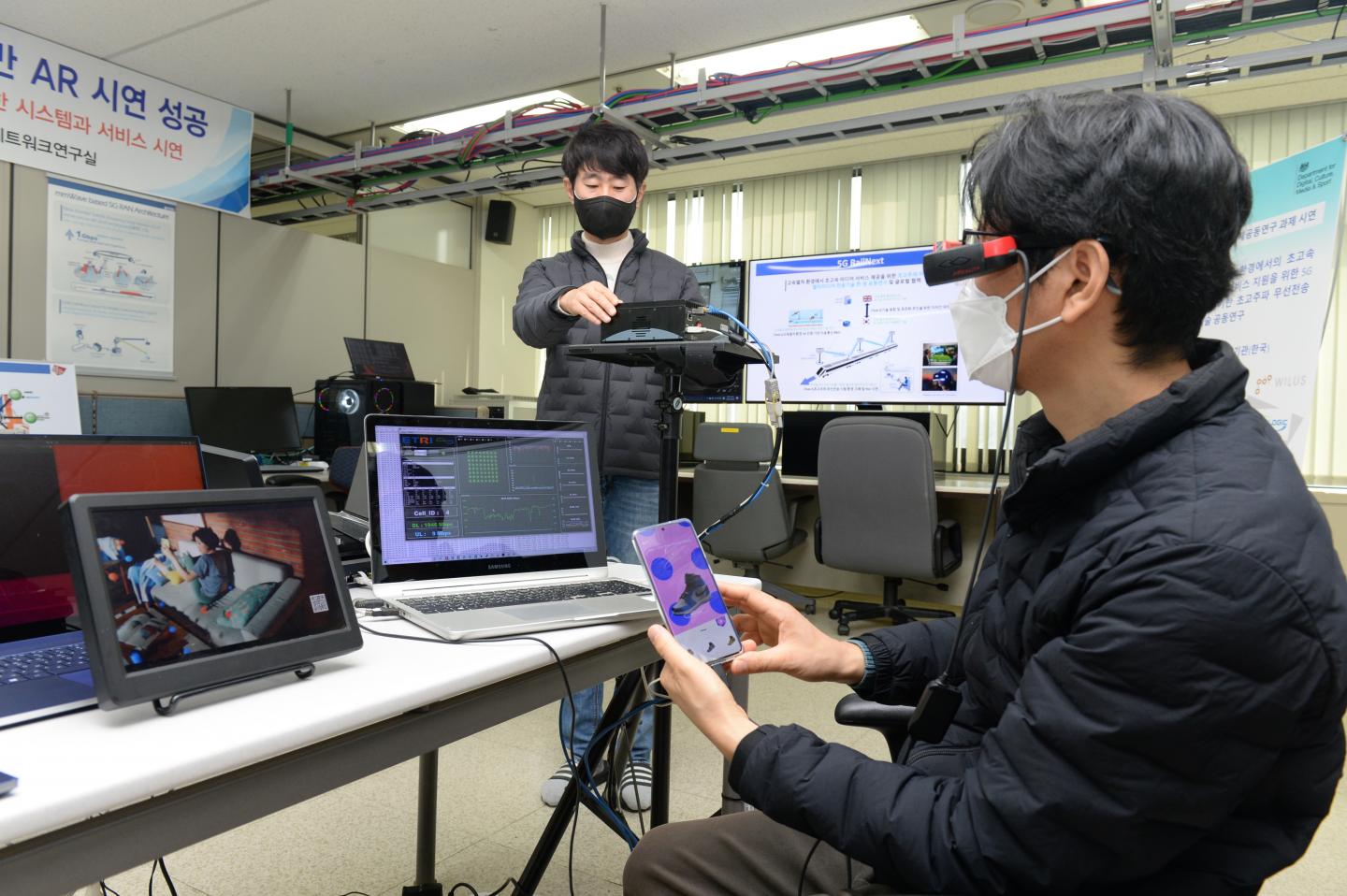 A team of Korean and British researchers have successfully performed a demonstration test of AR1) services on the subway by using the mobile backhaul communication technology2) that they have jointly developed. The test shows that people will soon be able to enjoy a wide range of high quality multimedia services including high-definition video streaming in a mobile environment such as buses and subway.

ETRI announced that it successfully conducted a demonstration test of 5G services using an millimeter frequency based wireless backhaul system on a subway train between Jamsil Station and Sonpa Station on Seoul Subway Line 8. The test was held on February 25. The maximum data rate was 1.9Gbps, or 30 times faster than the current transmission rate, which allows 190 users to use AR-immersive multimedia services simultaneously.

Currently, the average download speed3) of wireless services provided by mobile network operatoers providers on the subway is about 58.50Mbps. The speed further drops during the busy commuting hours when there are far more users on the subway. In the current communication environment, users often experience service interruption when using large-scale multimedia services.

ETRI installed 5 base stations in the subway track side of tunnel and set up a gateway and a server in the communication room of Jamsil Station. The terminal is installed at carriage of operating train cab to make the service possible.

The research team chose the Jamsil-Songpa section of Subway Line 8 for the test since it has the most curved path in Seoul Metro and to make sure that they can provide consistent service quality, considering the fact that frequency tend to travel in a straight, linear path.

In the trial, they measured the transmission speed in a running train and demonstrated immersive multimedia services at the platform of Songpa Station. In particular, the test included a new advertisement model that allows users to receive customized content that was sent out.

Moreover, as part of the test, smartphone application and AR glass were connected on a signage monitor showing an ad for the latest model of sneakers, with one of the team members virtually trying on the shoes. This is expected to have a significant impact on the advertisement industry in the future.

A data transmission speed of approximately 10Mbps is required for the demonstration of an AR-immersive multimedia service wherein one can virtually try on shoes and the team said that the speed was as high as 1.9 Gbps6) between the cell tower and the terminal. According to research team, the key technologies to enable the new service is the beam forming7) that concentrates transmission signals onto a particular terminal and the handover8) that maintains data streaming without loss or disruption under the circumstances wherein the base stations that connect to the terminal keep changing as the subway train travels.

The joint project, launched as a result of the third Korea-UK ICT Policy Forum held in February 2018, was started in April 2019 and carried out for the next two years. The Korean researchers were responsible for developing an mmWaved frequency-based wireless backhaul system, with their UK counterparts creating 5G-based immersive AR services.

“The test has confirmed that high-speed wireless services can be made available for use on commercial public transportation systems including subway. This is significant in the sense that the technology will be able to help Korean corporations expand overseas,” ETRI president Myung-jun Kim said.

According to British Ambassador Simon Smith, the 5G technology that has been jointly developed by a team of Korean and British researchers will be further tested for actual use. “I hope the two sides continue to work together to make the technology commercially available not only in Korea and UK but also in other countries around the world,” he added.

The team plans to carry out further R&D to apply high-speed mobile backhaul networks in diverse railway environments. In addition, they will continue to expand cross-border exchanges including forums and joint research efforts.

The project was part of the Korea-UK international joint research initiative under the broadcasting and communication industry technology development plan jointly implemented by the Ministry of Science and ICT of Korea and Department of Digital, Culture, Media, and Sports of UK (DCMS).

In Korea, the project is led by ETRI, and the joint research partners and commissioned research institutions include WILUS, Inc., Industry-Academe Cooperation Team of Dankook University, Clever Logic Co., Ltd., and Seoul Metro.

In the UK, Cisco is managing the project, with Subline, Amplespot, Strathclyde, and Glasgow City Council as the joint research partners.

About Electronics and Telecommunications Research Institute(ETRI)

* Annotation 1) AR: a technology that overlays digital content and information onto the physical world

* Annotation 3) Data based on the 2019 Telecommunication Service Quality Evaluation by the Ministry of Science, Technology, and Communication.

* Annotation 4) Flexible Access Common Spectrum is a frequency that can be used by anyone meeting the criteria. It is characterized by the transmission of signals between short distances and straight linear path.

* Annotation 5) Backhaul refers to the section of a communication network where the core network and the network edges are connected.

* Annotation 6) Approximately 30 times faster than the average wireless download speed available by mobile communication networks on the subway in Korea (58.5Mbps). The service is available to around 190 users.

* Annotation 7) Beam Forming allows the beam of antenna to be directed toward a particular terminal instead of random shooting.

* Annotation 8) When a terminal shifts from one cell tower to another, it is connected to the service in synch with the allotted communication channel.