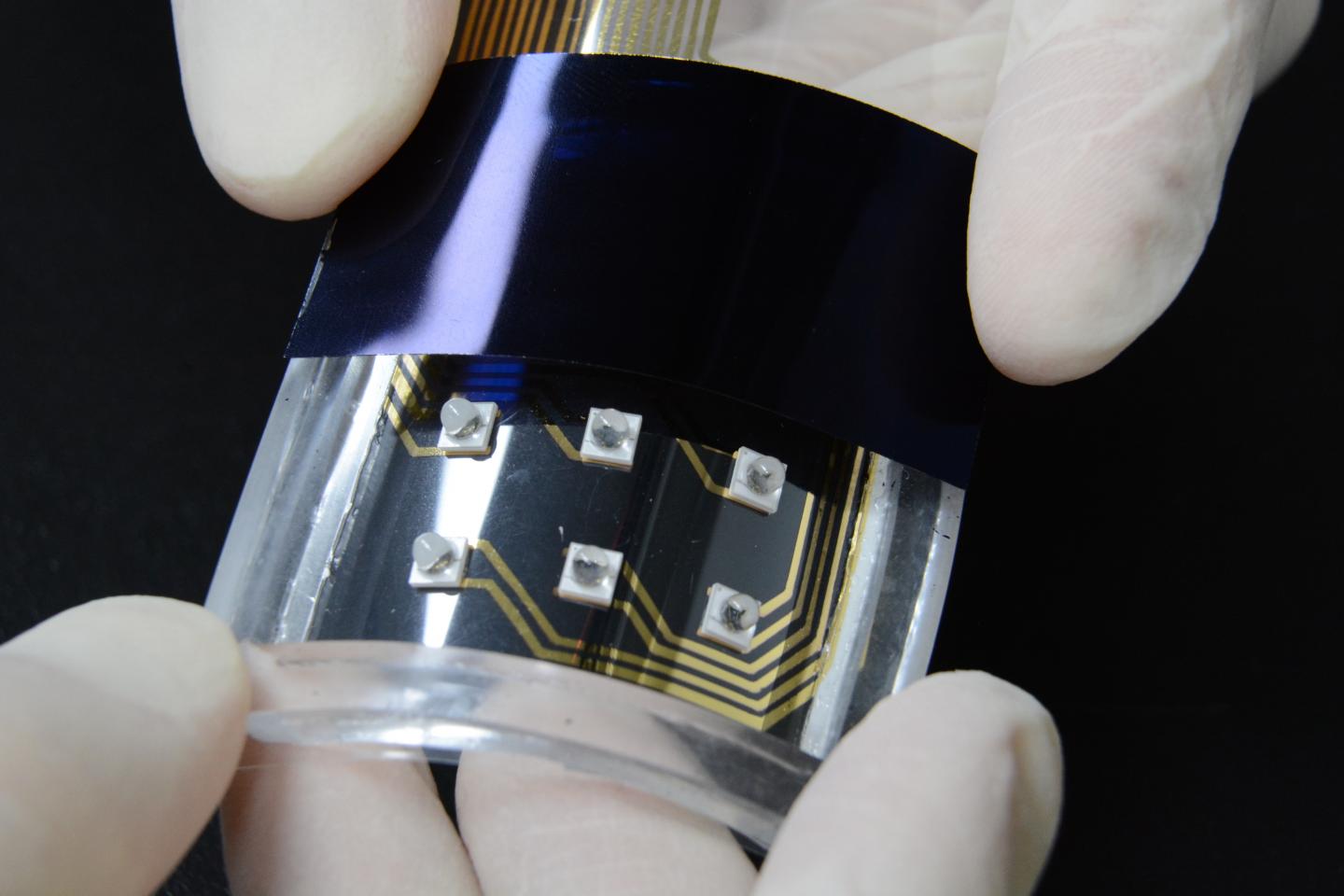 A Korean research team succeeded in developing a technology generating various vibration using LED light signals. The technology allows various tactile sensations by area and reduction in size by considerably lowering the cost of light source, and these are expected to be applied to many industries including automobile and electronics.

The Electronics and Telecommunications Research Institute, or ETRI for short, announced that it succeeded in developing a technology to implement various vibrations using LED. This technology was widely recognized as published on the cover of the February 10 issue of ACS Applied Materials & Interfaces1), a leading scientific journal.

* Glossary description 1) ACS Applied Materials and Interfaces, a scientific journal ranking among the top 14%; impact factor at 8.758 / on the supplementary cover.

Haptic technology refers to an interface that can create an experience of touch to the user. As applications of touch-screen devices and remotely controlled tasks have increased via smartphone, home appliance, medical equipment, and virtual game, demand for technology requiring accuracy and safety is also on the rise.

Representative applications using haptic technology include vibrations made on the smartphone and tablet screen. The currently commercialized technology offers vibrations felt on the entire device like a mono speaker. The user feels the consistently same vibration regardless of where he or she touches.

The technology realized by ETRI allows the user to experience varying tactile sensations by area where his/her finger touches. The technology is expected to be optimized for the environment where the user’s fingers can feel varying textures of different products while shopping online.

At present, the vibration made on the smartphone or game pad is created by the movement of a pendulum attached to the motor. Drawbacks includes the inability to deliver delicate tactile sensations by part, since the consistently same vibration effect spreads to an entire device.

Another technology was recently developed to create vibrations using shock waves per momentary temperature change using laser; due to the price2) of the laser used for the technology at tens of thousands of USD, however, it is known to be difficult to reduce in size and commercialize.

The research team at ETRI succeeded in developing a technology that transformed light signals at low outcome into vibration. This technology can allow productions of display screens making independent vibrations by part using multiple LEDs in small size, whose price range is 1/10,000 of the extremely expensive laser light source.

This technology is based on the principle that absorbs light energy and turns it into thermal energy. When the film coated with special photothermal layer3) is applied with light energy, the film goes through bending and restoration depending on the thermal expandability of the material as it is heated and cooled, creating vibration.

The research team utilized this technology to prove the possibility of making precise vibrations with a wide frequency bandwidth4) by creating a 3×3 LED sequence made of nine 1cm2 units. The team believes the size will be easily applied to a much larger area.

* Glossary description 4) “Frequency bandwidth” refers to the range that can control the vibration per second (Hz). Humans are known to react most sensitively to vibrations in the range of 100-200 Hz, gentle to high frequencies and rough to lower frequencies. The wider the range, the more varied the frequency can express vibration. Currently the new technology can express 125-300 Hz.

The latest trend in the automobile industry includes the use of one touch-screen integrated with various control functions including navigation, media, and mutual assistance systems in place of traditional operative devices, such as buttons or dials. Currently, feedback per touch input is simple; through this new technology, however, tactile sensations to turn a dial, press a button, slide and the like can be simultaneously added.

The technology offers durability in particular as it does not include an electric structure in the film for easy application to a thin and flexible display screen. As it can integrate well with the currently active field of flexible devices, it is expected to be applied to various researches.

The research team also expects to utilize the new technology as an alternative to supplement Braille by grafting it with information devices for the visually challenged. It plans to make an effort to commercialize the technology for automobiles, touch-screen devices, electronic displays, smartphones and more.

“The technology is expected to be used widely to support people who are vulnerable with information, such as the visually challenged, by practically applying the original technology designed to deliver information through tactile sensation,” said Shin Hyung-cheol, head of the Human Enhancement & Assistive Technology Research Section at ETRI.

The research team is currently engaged in follow-up studies to create vibrations that are strong enough for users to feel the sensation by increasing the efficiency of light-to-vibration energy conversion and to reduce the consumption of electric energy.

This performance was part of the project titled “Research on the Original Technology of Human-centered Autonomous Intelligent Systems” supported by the Korean Ministry of Science and ICT (MSIT). The research team at ETRI has published 10 academic theses and applied for 7 patents related to this technology.

About Electronics and Telecommunications Research Institute(ETRI)

This demonstration technology was developed with the assistance of the Ministry of Science and ICT. The technology was published on the cover of the February 10 issue of ACS Applied Materials & Interfaces.