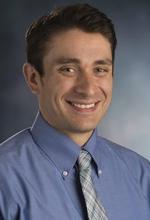 According to its website, the APA’s Division of School Psychology (Division 16) each year presents the award “to young professional and academic school psychologists who have demonstrated scholarship that merits special recognition.” Continuing scholarship is the primary consideration for the award, and nominees must be within seven years of receiving their education specialist or doctoral degree.

“The Lightner Witmer Award is one of the most prestigious awards in our field, and a lot of the researchers I look up to have won it in the past,” said Van Norman. “I am honored to receive it.”

Van Norman arrived at Lehigh’s College of Education in 2018 after serving for three years as an assistant professor of school psychology at Georgia State University. His research focuses on furthering quantitative approaches to estimating student growth that have the potential to meaningfully impact applied educational practice. Van Norman directs the Quantitative Analysis of Learning, Interventions, and Testing for Youth (QuALITY) Lab, part of the College of Education’s Center for Promoting Research to Practice. A nearly $900,000 grant from IES supports his development of a quantitatively rigorous and user-friendly measure of the effectiveness of interventions for students with disabilities and learning difficulties. Most recently he and his colleagues were awarded nearly 1.7 million dollars from IES to investigate the maintenance of supplemental reading interventions. He received his Ph.D. from the University of Minnesota – Twin Cities.

George DuPaul, professor of school psychology and associate dean for research in the College of Education, and Jim Ysseldyke, Birkmaier Professor emeritus in the department of educational psychology, former director of the National Center on Education Outcomes, and former co-director of the Center for Reading Research at the University of Minnesota, nominated Van Norman for the award.

“As Dr. Van Norman’s colleague and friend, I am thrilled that he is receiving the Lightner Witmer Early Career Research Award. This is one of the most prestigious honors that a school psychology scholar can receive and is a testament to the rigor, superior quality and significant impact of Dr. Van Norman’s research on our field. He is not only a prolific scholar, but his research has directly influenced how school psychologists assess and address student academic difficulties,” said DuPaul, who in 2008 received the APA’s Division of School Psychology Senior Scientist Award.

“I am incredibly grateful to George DuPaul and Jim Ysseldyke for nominating me,” said Van Norman. “Both are tremendous scholars in our field and have been influential and helpful to me in my career. I am really appreciative of their support.”