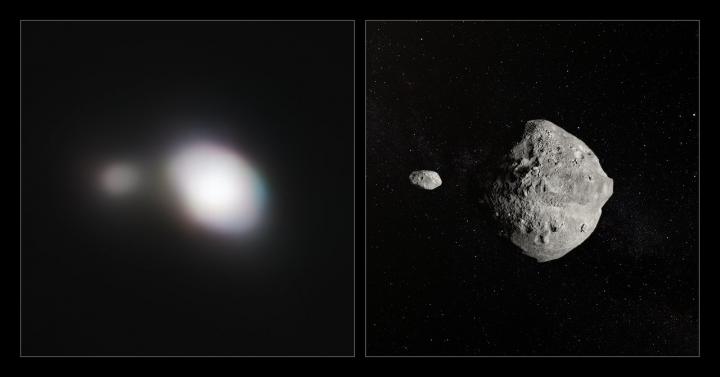 The International Asteroid Warning Network (IAWN) coordinated a cross-organisational observing campaign of the asteroid 1999 KW4 as it flew by Earth, reaching a minimum distance of 5.2 million km [1] on 25 May 2019. 1999 KW4 is about 1.3 km wide, and does not pose any risk to Earth. Since its orbit is well known, scientists were able to predict this fly-by and prepare the observing campaign.

ESO joined the campaign with its flagship facility, the Very Large Telescope (VLT ). The VLT is equipped with SPHERE — one of the very few instruments in the world capable of obtaining images sharp enough to distinguish the two components of the asteroid, which are separated by around 2.6 km.

SPHERE was designed to observe exoplanets; its state-of-the-art adaptive optics (AO) system corrects for the turbulence of the atmosphere, delivering images as sharp as if the telescope were in space. It is also equipped with coronagraphs to dim the glare of bright stars, exposing faint orbiting exoplanets.

Taking a break from its usual night job hunting exoplanets, SPHERE data helped astronomers characterise the double asteroid. In particular, it is now possible to measure whether the smaller satellite has the same composition as the larger object.

“These data, combined with all those that are obtained on other telescopes through the IAWN campaign, will be essential for evaluating effective deflection strategies in the event that an asteroid was found to be on a collision course with Earth,” explained ESO astronomer Olivier Hainaut. “In the worst possible case, this knowledge is also essential to predict how an asteroid could interact with the atmosphere and Earth’s surface, allowing us to mitigate damage in the event of a collision.”

“The double asteroid was hurtling by the Earth at more than 70 000 km/h, making observing it with the VLT challenging,” said Diego Parraguez, who was piloting the telescope. He had to use all his expertise to lock on to the fast asteroid and capture it with SPHERE.

Bin Yang, VLT astronomer, declared “When we saw the satellite in the AO-corrected images, we were extremely thrilled. At that moment, we felt that all the pain, all the efforts were worth it.” Mathias Jones, another VLT astronomer involved in these observations, elaborated on the difficulties. “During the observations the atmospheric conditions were a bit unstable. In addition, the asteroid was relatively faint and moving very fast in the sky, making these observations particularly challenging, and causing the AO system to crash several times. It was great to see our hard work pay off despite the difficulties!”

While 1999 KW4 is not an impact threat, it bears a striking resemblance to another binary asteroid system called Didymos which could pose a threat to Earth sometime in the distant future.

Didymos and its companion called “Didymoon” are the target of a future pioneering planetary defence experiment. NASA’s DART spacecraft will impact Didymoon in an attempt to change its orbit around its larger twin, in a test of the feasibility of deflecting asteroids. After the impact, ESA’s Hera mission will survey the Didymos asteroids in 2026 to gather key information, including Didymoon’s mass, its surface properties and the shape of the DART crater.

The success of such missions depends on collaborations between organisations, and tracking Near-Earth Objects is a major focus for the collaboration between ESO and ESA. This cooperative effort has been ongoing since their first successful tracking of a potentially hazardous NEO in early 2014.

“We are delighted to be playing a role in keeping Earth safe from asteroids,” said Xavier Barcons, ESO’s Director General. “As well as employing the sophisticated capabilities of the VLT, we are working with ESA to create prototypes for a large network to take asteroid detection, tracking and characterization to the next level.”

This recent close encounter with 1999 KW4 comes just a month before Asteroid Day, an official United Nations day of education and awareness about asteroids, to be celebrated on 30 June. Events will be held on five continents, and ESO will be among the major astronomical organisations taking part. The ESO Supernova Planetarium & Visitor Centre will host a range of activities on the theme of asteroids on the day, and members of the public are invited to join in the celebrations.

[1] This distance is about 14 times the distance to the Moon — close enough to study, but not close enough to be threatening! Many small asteroids fly past the Earth much closer than 1999 KW4, occasionally closer than the Moon. Earth’s most recent encounter with an asteroid took place on 15 February 2013, when a previously unknown asteroid 18 metres across exploded as it entered Earth’s atmosphere over the Russian city of Chelyabinsk. The damage produced by the subsequent shockwave caused injuries to about 1,500 people.

Radiation in parts of Marshall Islands is higher than Chernobyl