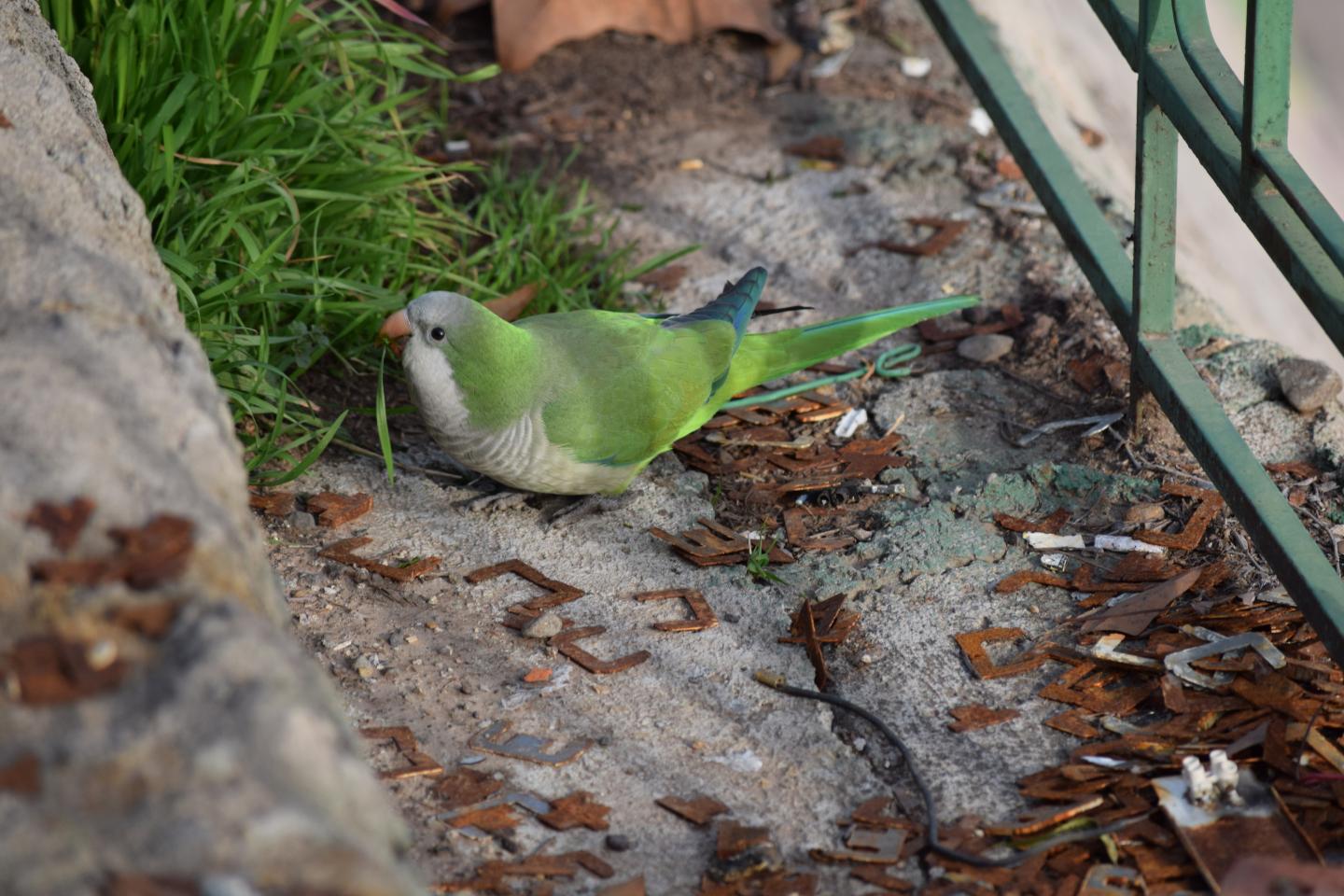 When Stephen Pruett-Jones, PhD, an ecologist at the University of Chicago, first came to Chicago in 1988, he stumbled on a unique piece of the city’s history: the monk parakeets of Hyde Park.

In the 1950s and 60s, tens of thousands of monk parakeets were imported from South America as pets. Inevitably, many of them escaped or were released. By 1968, they were found breeding in the wild across 10 states, including a colony in the Hyde Park neighborhood of Chicago, home of the University of Chicago campus.

Pruett-Jones, who usually studies wrens and other wild birds in Australia, noticed a large group of the parakeets on his daily commute. He started sending students out to study the birds and eventually organized an annual lab project to count them.

“I have never actually held a wild parrot in the United States,” he said. “But indirectly I’ve become the spokesperson for parrot research here because when I saw the monk parakeets in Chicago, I realized nobody else was working on them.”

Those monk parakeets aren’t the only parrot species thriving in the U.S. as a result of the pet trade. In a recent study, Pruett-Jones teamed up with Jennifer Uehling, a former UChicago undergraduate student now working on a PhD at Cornell University, and Jason Tallant of the University of Michigan to research data on bird sightings from 2002 to 2016. They found that there were 56 different parrot species spotted in the wild in 43 states. Of these, 25 species are now breeding in 23 different states.

“Many of them were escaped pets, or their owners released them because they couldn’t train them or they made too much noise–all the reasons people let pets go,” Pruett-Jones said. “But many of these species are perfectly happy living here and they’ve established populations. Wild parrots are here to stay.”

A diverse new landscape for parrots

The study, published in the Journal of Ornithology, uses two different databases of bird sightings to track this diverse new landscape of naturalized parrot species. The first, the Christmas Bird Count, is an annual survey organized by the National Audubon Society that captures a snapshot of birds in the U.S. during a two-week period from December 14 to January 15 each year. The second resource, eBird, is an online database for bird watching enthusiasts to log all the birds they have seen.

Once Uehling, Tallant, and Pruett-Jones compiled the data, the most common species were monk parakeets, the Red-crowned Amazon, and the Nanday Parakeet. Most of these birds are concentrated in the warmer climates of Florida, Texas and California, but there are other large populations concentrated around cities like New York and Chicago. Pruett-Jones says there are now more Red-crowned Amazons living in California than there are in their original habitats in Mexico.

“The entire conservation focus for this species is now on a non-native, introduced, naturalized population,” he said. “The survival of the species is most likely going to come from efforts to save it someplace where it never existed before.”

Monk parakeets are reported to be agricultural pests in South America, but other than a few isolated examples, there is no evidence that any of the feral parrots in the U.S. are invasive or competing with native birds. Monk parakeets are the only species of parrot that build their own nests, however, and the bulky structures are known to damage utility lines.

The story of Chicago’s parakeets is one with the city, that of tenacious survival in spite of the elements. Most of the year they feed by foraging in parks and open grassy areas. They don’t migrate, but one of Pruett-Jones’ students discovered that they survive Chicago’s harsh winters by switching almost exclusively to backyard bird feeders from December to February.

Harold Washington, Chicago’s first African American mayor, lived across the street from one of the city’s best-known parakeet colonies and called them a “good luck talisman.” After he died in 1987, the USDA tried to remove the birds, but local residents threatened a lawsuit.

The parakeets stayed but their numbers have dwindled from a peak of about 400 birds to just 30 today. Some of the them have dispersed to greener areas in the suburbs, although the largest colony is now under the Skyway bridge connecting Illinois to Indiana. There are also signs of a nationwide decline in all birds, perhaps due to a disease or parasite.

Pruett-Jones may have become a national expert on parrots by accident, but he says this work is crucial to understand conservation of endangered species and how non-native or invasive species can spread.

“Because of human activity transporting these birds for our own pleasure, we have inadvertently created populations elsewhere,” he said. “Now for some of these parrots, they may become critical to the survival of the species.”