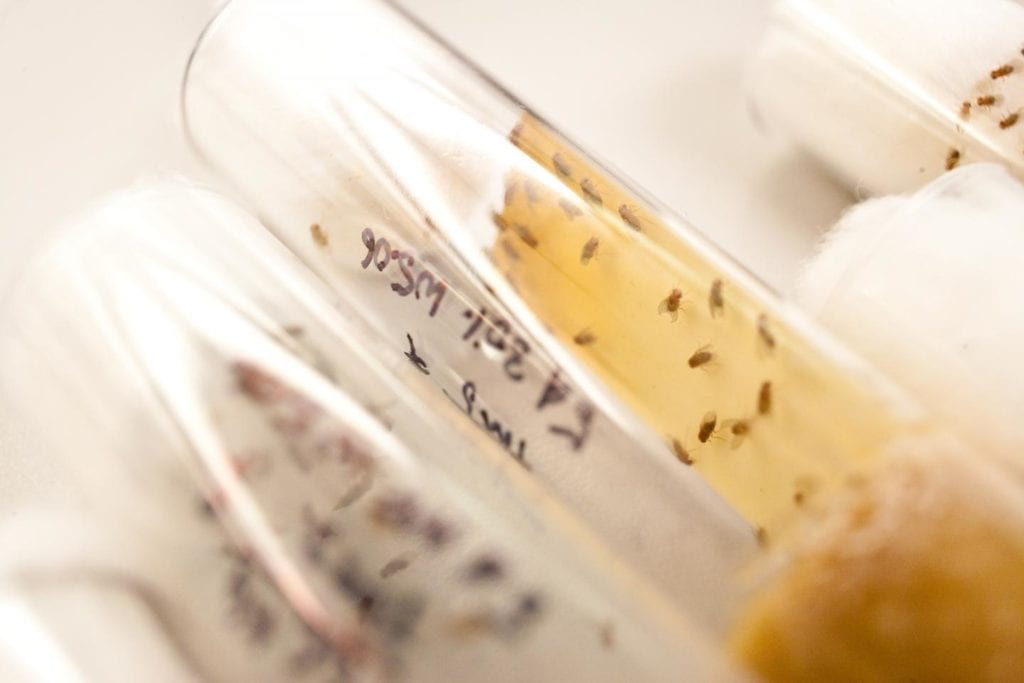 LA JOLLA, CALIF. – Jan. 14, 2019 – We all know we should eat fruits and vegetables to keep our own heart healthy. But now, scientists are learning that epigenetic changes, or molecular tags that modify our DNA, can cause your children–and even your grandchildren–to inherit the negative effects of your poor diet. However, the details behind this inheritance–and how to stop it–have been unclear.

Now, scientists from Sanford Burnham Prebys Medical Discovery Institute (SBP) have identified an epigenetic marker and two genes that caused heart failure in the children and grandchildren of fruit flies with high-fat-diet-induced heart dysfunction. Reversing the epigenetic modification or over-expressing the two genes protected subsequent generations from the negative heart effects of their parents’ diet. These findings help explain how obesity-related heart failure is inherited and uncover potential targets for treatment. The study was published in Nature Communications on January 14, 2019.

The obesity epidemic is causing rates of heart failure to rise. Currently, more than 6 million people in the United States are living with heart failure, a number predicted to rise to more than 8 million in 2030, according to the American Heart Association (AHA). The condition occurs when the heart isn’t able to pump enough blood throughout the body and typically affects people over the age of 65.

“Scientists have hoped for many years to identify the genetic basis of obesity, but answers remained puzzling and elusive,” says Rolf Bodmer, Ph.D., senior author of the paper and director and professor in the Development, Aging and Regeneration Program at SBP. “Our findings reveal an inheritance mechanism behind heart failure fueled by a high-fat diet. We also uncovered an epigenetic factor and genetic targets that could be explored to protect individuals from the effects of their parents’ or grandparents’ poor diet.”

There is evidence in humans that diet during pregnancy can have lasting effects on children. Babies born following a Dutch famine during World War II had higher rates of obesity and coronary heart diseases. Mothers who are overweight or obese are more likely to have children who have diabetes or other health difficulties. However, studying the underlying genetic and molecular mechanisms that are responsible for these observations have been difficult, hindering scientists’ ability to break the chain of inheritance.

Fruit flies offer an attractive alternative to study genetics. Eighty percent of genes that cause disease in humans are also found in the fly. Additionally, their tube-shaped heart consists of only 80 heart cells, called cardiomyocytes (in humans, this tube folds into the four chambers of our heart). Their similarity to humans, simplicity and short life cycle–a new generation is born every fifteen days–make fruit flies an excellent model for studying the genes that contribute to human heart health.

In the study, the scientists fed fruit flies a diet rich in coconut oil for five days. These flies became overweight and developed traits that mimic human lipotoxic heart disease–the accumulation of fat in heart cells–and lead to heart failure, including irregular heartbeat (arrhythmia) and weakened heart contractions. Their children and grandchildren also had heart dysfunction, even when fed a normal diet.

By comparing generations of flies born from parents who ate normal diets, the scientists identified an inherited epigenetic marker called trimethylated lysine 27 in histone 3 (H3K27me3). Reducing the level of this epigenetic mark throughout the fruit fly protected the two subsequent generations from heart dysfunction.

The researchers also identified two genes involved in metabolism that were “turned down” in the next two generations of flies, called bmm and PGC-1. Revving up the flies’ metabolism by overexpressing these genes also protected the hearts of the children and grandchildren of flies that ate a fatty diet. This protection lasted even if the subsequent generation consumed coconut oil.

This study provides the proof-of-concept results the scientists need to embark on further explorations.

“Next, we want to determine how and when these genetic and epigenetic changes are inherited, and to what extent they arise from the mother or father,” says Bodmer. “We want to study fruit fly development at all stages–from egg to embryo to adulthood–to determine what the inherited primary changes are and at which point these changes are implemented to cause metabolic imbalance and lipotoxic heart disease. The answers we gain may help us learn how to intervene and stop these changes from passing to the next generation.”

Adds Maria Clara Guida, Ph.D., co-first author of the study and a postdoctoral researcher in the Bodmer lab, “We’d also like to better understand how these two puzzle pieces–inherited epigenetic and genetic changes–are linked. Epigenetic changes are broad and typically control multiple molecular pathways. Better understanding the gene networks that are turned on and off upon eating a high-fat diet and how these changes are orchestrated by epigenetic factors could help us find important therapeutic targets to treat obesity-related heart failure.”

The additional co-first author of the study is Ryan Tyge Birse, Ph.D., a former staff scientist at SBP who is currently at Biocompatibles.

Research reported in this press release was supported by the National Institutes of Health (NIH) (R01HL054732 and P01AG033456) and the AHA. The content is solely the responsibility of the authors and does not necessarily represent the official views of the NIH.

Sanford Burnham Prebys Medical Discovery Institute (SBP) is an independent nonprofit medical research organization that conducts world-class, collaborative, biological research and translates its discoveries for the benefit of patients. SBP focuses its research on cancer, immunity, neurodegeneration, metabolic disorders and rare children’s diseases. The Institute invests in talent, technology and partnerships to accelerate the translation of laboratory discoveries that will have the greatest impact on patients. Recognized for its NCI-designated Cancer Center and the Conrad Prebys Center for Chemical Genomics, SBP employs nearly 900 scientists and staff in San Diego (La Jolla), Calif. For more information, visit us at SBPdiscovery.org or on Facebook at facebook.com/SBPdiscovery and on Twitter @SBPdiscovery.

How to finance solar power