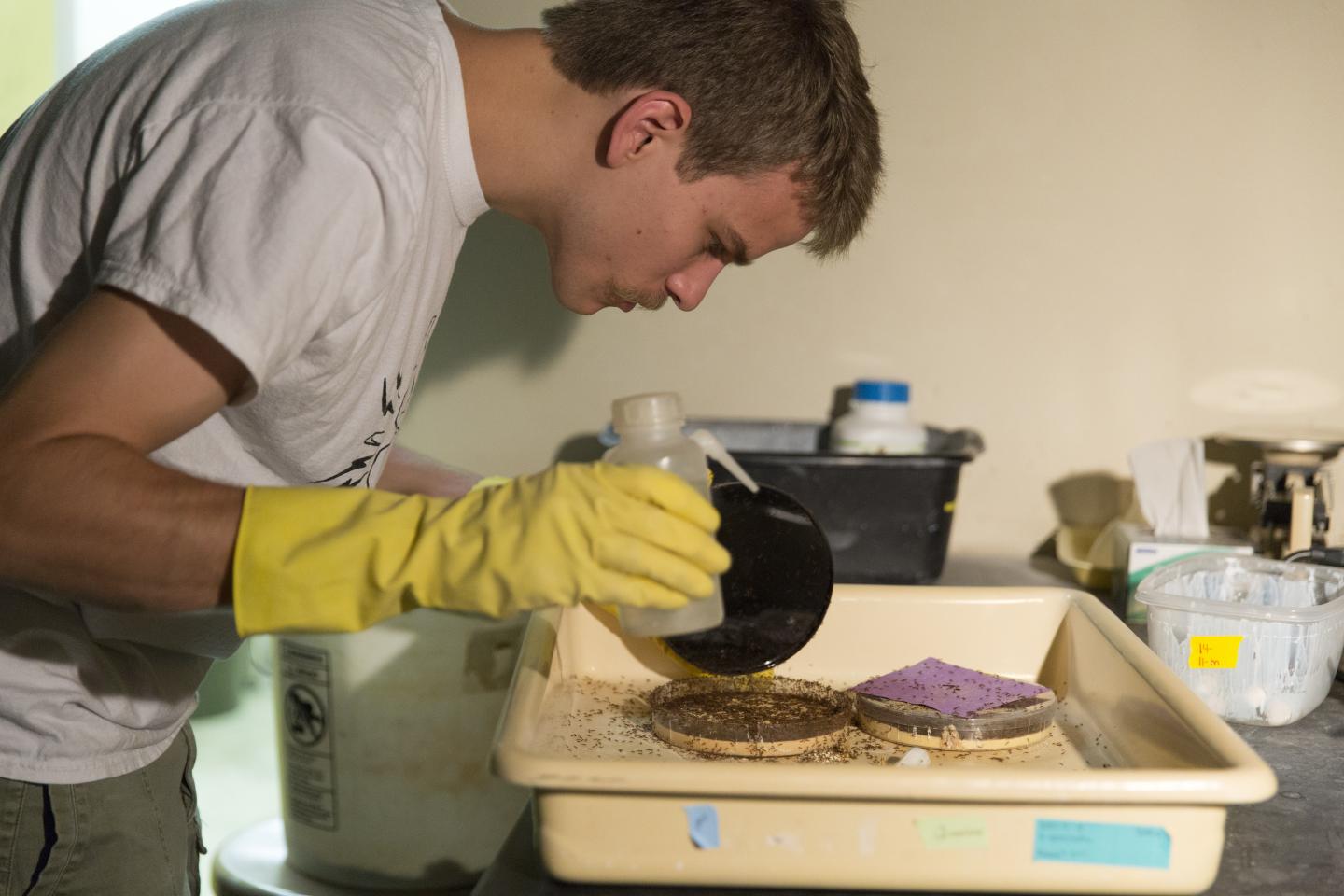 Athens, Ga. – In most colonies, ants work in service of a single reproductive queen, but that’s not always the way ant societies function.

Researchers at the University of Georgia have found colonies of tropical fire ants, native to Florida and coastal Georgia, that thrive with multiple queens and in close proximity to single-queen colonies of the same species.

“The coexistence of two dramatically different social structures fascinated me,” Kip Lacy said. “I had to know more.”

Lacy, who is currently a graduate fellow at the Rockefeller University but received his master’s degree in entomology from UGA’s College of Agricultural and Environmental Sciences in 2018, worked with UGA fire ant researcher Ken Ross and DeWayne Shoemaker at the University of Tennessee to isolate and document the multi-queen colonies.

Their work will appear in the April 2019 edition of Current Biology. An online version of the paper is available here.

Lacy worked with colleagues at the U.S. Department of Agriculture Agricultural Research Service in Gainesville, Florida, to help find and isolate the communities of native fire ants that cover the shoulders and medians of Florida highways.

In these areas, they found that multi-queen “polygyne” colonies would be nestled right next to single-queen “monogyne” colonies of the same species. Nests with single queens were found as close as 5 feet away from nests with as many as 13 queens, Lacy said.

“They can exist right next to each other, but their social structure remains intact,” Lacy said.

Many fire ant colonies are founded by a single queen, mated to a male ant from a different colony, who produces all of the eggs to start a colony of her own. However, it’s not unheard of for ants of the same species to develop alternative reproductive habits.

Ross, who has studied fire ant genetics and social structures for decades, previously documented the coexistence of monogyne and polygyne colonies in populations of Georgia’s invasive red imported fire ants. In polygyne colonies of this species, all the ants share a “social chromosome” that is absent from individuals in single-queen colonies. This chromosome apparently induces what Ross described as the “polygyne syndrome.”

In addition to the number of queens, polygyne colonies of the red imported fire ant differ from monogyne colonies in many ways, including lower levels of aggressiveness toward non-nestmates and smaller body sizes of individual ants. But despite these differences, the fundamental mode of reproduction is the same in both types of colonies–all daughters (both queens and workers) are produced sexually.

Lacy was surprised to find that in the tropical fire ant, the reproductive modes of the two types of colonies differed. Just like the red imported fire ants, queens of monogyne colonies produce all daughters sexually. By contrast, in tropical fire ant colonies with multiple queens, Lacy found that the queens reproduce asexually. All reproductive queens and daughter queens inside the colony have been shown to be genetically identical.

However, the worker ants in these colonies displayed a much greater genetic diversity; unlike the queens, they were not clones. Controlled experiments revealed that queens were produced asexually and workers were produced sexually in polygyne colonies.

“That was a surprise because we also found that the male ants in these colonies seem to be sterile,” Lacy said.

“(Evolutionarily speaking), the males get nothing out of it because their sperm goes to produce workers that are sterile,” Ross said. “Those males’ genetic lines end there.”

Lacy and Ross have described the behavior of polygyne queens as “sperm parasitism.”

“Different species of ants have displayed different forms of social parasitism before, and this is just one more example of that behavior,” Ross said.

The genetic underpinnings of asexuality and the multi-queen syndrome in the tropical fire ant are currently unknown. However, genetic studies suggest that asexual queens may have evolved from sexually reproducing queens in monogyne colonies.

Understanding more about the biology of the tropical fire ants is important because, while they have been displaced by invasive fire ants in some communities in coastal Georgia and Florida, they’ve become invasive pests across Africa, southeast Asia and even the Galapagos Islands.

Sizing up a starry night

Scienmag May 20, 2019
Credit: Colleen Kelley CINCINNATI--Researchers at the University of Cincinnati are looking to enroll participants…

You’re not so tough, h-BN

New $3 million project to study opioid medication use in criminal…